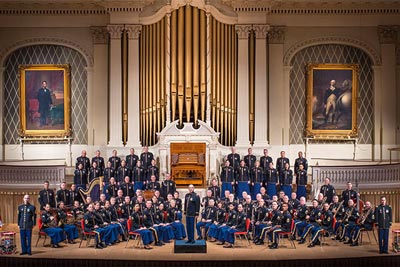 
From Boston to Baghdad, Tampa to Toronto, The United States Army Field Band has been thrilling audiences of all ages for more than six decades. As the premier touring musical representative for the United States Army, this internationally-acclaimed organization travels thousands of miles each year presenting a variety of music to enthusiastic audiences throughout the nation and abroad. Through these concerts, the Field Band fosters the support of the American people for members of the armed forces and supports diplomatic efforts around the world.

Since its formation in March 1946, the Field Band has appeared in all fifty states and in more than thirty countries on four continents. The organization’s four performing components, the Concert Band, the Soldiers’ Chorus, the Jazz Ambassadors, and Six-String Soldiers, each travel over 100 days annually. Tours include formal public concerts, school assemblies, educational outreach programs, festivals, and radio and television appearances.

The United States Army Field Band is considered by music critics to be one of the most versatile and inspiring musical organizations in the world. Its members, selected by highly-competitive audition, represent some of the finest musical talent in America. More than six decades as the military’s most traveled musicians have earned them the title, “The Musical Ambassadors of the Army.”