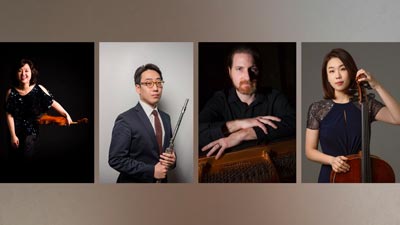 About The Afternoon Recital

Beomjae is an alumnus of Ensemble Connect (formerly known as Ensemble ACJW) – a program of Carnegie Hall, The Juilliard School and Weill Music Institute. As an orchestral musician, he has been a guest performer with the New York Philharmonic and Korean Symphony Orchestra. Beomjae was also featured as one of the six emerging artists in classical music by Symphony Magazine (published by League of American Orchestras) in their Winter 2020 issue, and on WQXR’s Young Artists Showcase.

Beomjae is an Adjunct Assistant Professor of Flute at Ocean County College in Toms River, New Jersey. He has given guest lectures and masterclasses at the Manhattan School of Music, Stony Brook University, California State University Fresno, Dickinson College, and Skidmore College. Additionally, he is a faculty member in flute performance at JCC Thurnauer School of Music in New Jersey.

Beomjae holds a bachelor’s degree from Oberlin College, a master’s degree and the prestigious Artist Diploma from the Manhattan School of Music.

Jee Sun Lee - Jee Sun Lee, violinist, has performed as guest soloist, recitalist, and chamber musician throughout the US, Russia, Italy and Korea. She made her Chicago Cultural Center debut on the Dame Myra Hess Concert Series in 2015, which was broadcast live on WFMT radio and has given recitals at the Roerich Museum (NY), An die Musik Live (MD), the Windsor Art Center (CT), Noble Art Recital Series (PA), University of Virginia, Central Michigan University and The College of New Jersey. Ms. Lee performed as a soloist with The Ensemble of the Soloists Sofia in Russia, Queensboro Symphony Orchestra, Promise Ministries Chamber Orchestra, Bergen Youth Orchestra and Korean Chamber Orchestra.

As an orchestra musician, Ms. Lee has held concertmaster positions at Seoul National University, Stony Brook University and the New York Sinfonietta. She served as assistant concertmaster of the Westchester Chamber Symphony from 2005 to 2012.

Her teachers include Philip Setzer (Emerson Quartet), Pamela Frank and Charles Castleman. She graduated with honors (Cum Laude) from Seoul National University and earned her Master of Music degree from The Eastman School of Music. In 2006, she finished her Doctor of Musical Arts at Stony Brook University, where she received a full scholarship. Ms. Lee has participated in master classes with Dorothy Delay, Zakhar Bron, Young Wook Kim and Zvi Zeitlin. She is a former faculty member at Stony Brook University, pre-college division, Concordia College, NY and Saint Elizabeth University. Ms. Lee currently teaches at Ramapo College of NJ and Ocean County College.

DoYeon Kim - Distinguished for her charisma and communicative power, cellist DoYeon Kim is an award- winning soloist and collaborative artist, performing across North America and South Korea. Currently an assistant principal of the Washington Chamber Orchestra and a substitute assistant principal of the Eastern Connecticut Symphony Orchestra, DoYeon Kim has been working as an Adjunct Cello Faculty at Ocean County College. Kim’s belief in the equal opportunity for musical education across all backgrounds led her to serve as a teaching artist at the Paterson Music Project and New Jersey Symphony Orchestra, El Sistema-inspired programs. Her recent teaching experience also includes a cello/chamber music instructor at the Berkshire High Peaks Music Festival, where she works with advanced students from major conservatories in North America, Asia, and Europe.

As a passionate collaborative musician, she has been collaborating with many organizations such as Close Encounters With Music and New York Artist Management, chamber ensembles, orchestras in New York City and Washington DC area, and with distinguished colleagues from Boston University, Peabody Conservatory, Mannes School, Conservatoire Royal de Musique, and Conservatory Royal De Liège. The recent highlight of her chamber music experience includes a collaboration with International Solo Guitarist from Serbia, Nemanja Bogunovic at the Carnegie Hall Stern Auditorium. A founding member of the Ensemble Evolve (projects collaborating with living composers), she is also a member of Dante Deo Trio founded at the Eastman School of Music in 2012. Highlights of her chamber music experience include collaborations with members of prestigious ensembles such as Ying, American, Shanghai, Ariel, and Cavani quartets.

Brian Gilmore - A native of Toms River, NJ, pianist Brian Gilmore earned his Bachelor’s and Master’s degrees in piano performance and has since devoted himself to chamber music. Mr. Gilmore has studied under Veda Zuponcic, Amanda Penick, and Galina Greysermann, and worked in masterclasses with Ida and Ani Kavafian, John Steele Ritter, Douglas Humphreys, and John Perry among others.

As a lecturer at Ocean County College, Mr. Gilmore oversees the applied music program, has revitalized the classical recital series, and regularly collaborates with faculty, students, and area musicians. Through his work as an educator and performer, he aims to nurture musical awareness and understanding in this community, while ensuring that students with a desire to excel in music are afforded that opportunity.