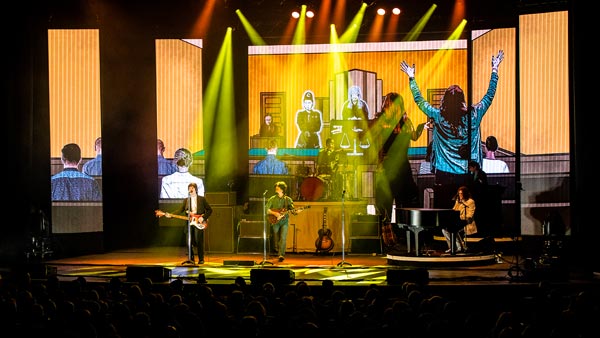 In celebration of the anniversary of Abbey Road, RAIN will bring the greatest hits of this epic recording to life, in addition to all your early Beatles favorites. This mind-blowing performance takes you back in time with the legendary foursome delivering a note-for-note theatrical event that is “the next best thing to seeing the Beatles” (Associated Press). Experience the worlds’ most iconic band and come celebrate the best of Abbey Road.

Feb. 9, 1964. A Sunday night that would change the course of popular music, popular culture – and history, forever! Millions of Americans tuned into The Ed Sullivan Show to watch a group of four mop-topped Englishmen in dark suits who called themselves The Beatles. What they witnessed was a new and exciting brand of melodic, guitar-and-harmonies-driven rock ‘n’ roll that was as infectious as it was original and unique. Little did the members of RAIN know that they would themselves come together in a band, forging a career that would keep them together longer than The Beatles! All this while raising the bar for professionalism and preserving the legacy of the immortal band’s recorded music on stage to wildly enthusiastic audiences. Spanning the generations, their audiences include the vast majority of older fans who never got to see The Beatles perform live, and fans who were not yet born when The Beatles hit America.

The story of RAIN actually begins in the mid 1970s when keyboardist Mark Lewis joined forces with four other local musicians who together formed the band that was originally called “Reign” and played throughout the Los Angeles/Orange County, CA area. With their mutual love for the music of The Beatles, Reign was in demand to play Beatles music and rode an enormous wave of nostalgia for the band that had broken up in 1970. Before long they had built a strong devoted following in and around Los Angeles. Following numerous misspellings in the media and advertising, “Reign” became RAIN (also the title of a 1966 Beatles single). A big break came for RAIN when Dick Clark hired them to record the music for the 1979 made-for-TV movie Birth of the Beatles.

RAIN’s intention was not just to cover Beatle songs, but to take it to a new level. To do songs that The Beatles had never performed live, and do them note-for-note, just like the records. At this time, ‘tribute bands’ were non-existent.

Since the 1980s, the music is first and foremost. For more than two decades, RAIN has distinguished itself by focusing on details, always being faithful to The Beatles with the ultimate goal of delivering a perfect note-for-note performance. All the music is performed live, with no pre-recorded tapes or sequences. They approach The Beatles music with the same respect a classical musician treats classical music. They worked hard for many years, studying each song, each note, movement and nuance…both vocally and musically. Today, they have a repertoire of over 200 Beatle songs. The members of RAIN are extraordinarily talented musicians in their own right and this becomes more evident with each show they do. RAIN audiences experience their own personal journey back to a time when Peace and Love was everyone’s mantra.

It’s difficult to believe that it has been more than four decades since The Beatles first came to America and that two of our beloved idols left us too soon. Equally hard to believe is the fact that this band whose music touched so many millions of people around the world was only experienced live in concert by very few. Their final concert tour was in 1966, long before the release of many of their classic albums such as “Sgt. Pepper,” “The White Album” and “Abbey Road.” This left a tremendous void in the music world and concert halls which now has been filled by RAIN. — Merle Frimark

Joey Curatolo and Steve Landes are endorsed by Epiphone.