An Evening With Philippe Cousteau 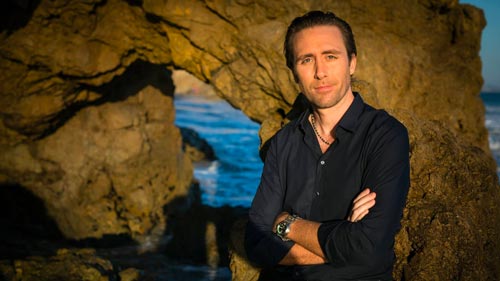 Inspired by the legacy of his grandfather Jacques Cousteau, Philippe is a multi Emmy-nominated TV host and producer as well as an author, speaker, and social entrepreneur.

As a social entrepreneur, Philippe is the co-founder of SeaWeed Naturals, a first-of-its-kind wellness lifestyle brand, that is creating products that bring customers the established benefits of the cannabis plant, combined with the countless powerful effects of marine botanicals like algae and seaweed. The brand is focused on using commerce to help build the emerging blue economy and set an example for how to create restorative businesses.

Philippe is the host and executive producer of the multi-Emmy nominated weekly syndicated series Awesome Planet, now in its sixth season.

Recently Philippe and his wife Ashlan were the stars of The Travel Channel’s hit series Caribbean Pirate Treasure; winner of a Cynopsis Media Award for Best Adventure Reality Series.  In 2016 Philippe teamed up with his wife Ashlan to co-host Nuclear Sharks, the #1 show for Discovery’s Shark Week. In 2015, they co-hosted a three-part series with Takepart.com, exploring tiger and rhino conservation in Nepal called Treasures of the Terai.

As a special correspondent for CNN, he has hosted several award-winning shows, including his series Going Green which ran for four years, and the 8-part special Expedition Sumatra. Philippe has also hosted and produced television programs for Animal Planet and the 8-part series Oceans for the BBC and Discovery Channel.

His conservation efforts are focused on solving global social and environmental problems. In 2005 he founded EarthEcho International; a leading environmental education organization that is building a global youth movement to restore and protect our ocean planet. To date, EarthEcho has activated over 2 million youth in 146 countries through its programs.

As an author, Philippe’s children’s book, Follow the Moon Home has been chosen for the prestigious Texas Bluebonnet Award Master List.  In addition, he has co-written, Going Blue and Make a Splash, both of which have won multiple awards, including Learning Magazine’s 2011 Teachers’ Choice Award for the Family, a Gold Nautilus Award, and a 2010 ForeWord Reviews Book of the Year Gold Award. His new book series, The Endangereds, with Harper Collins, launched in September of 2020, and his latest book, Oceans for Dummies, which he co-authored with his wife Ashlan was released in February 2021.

Philippe holds an honorary doctorate in marine biology from the University of Plymouth in England. He is a sought-after speaker having hosted and keynoted various events for the United Nations, Harvard University, the University of Florida, the Society of Environmental Journalists, The Economist Magazine global summit, and countless corporate events and global conferences. He has testified before Congress several times and serves on the National Council of the World Wildlife Fund, the Board of Antarctica 2020, the Board of Directors of Green 2.0, and the Board of Advisors of the Environmental Media Association.