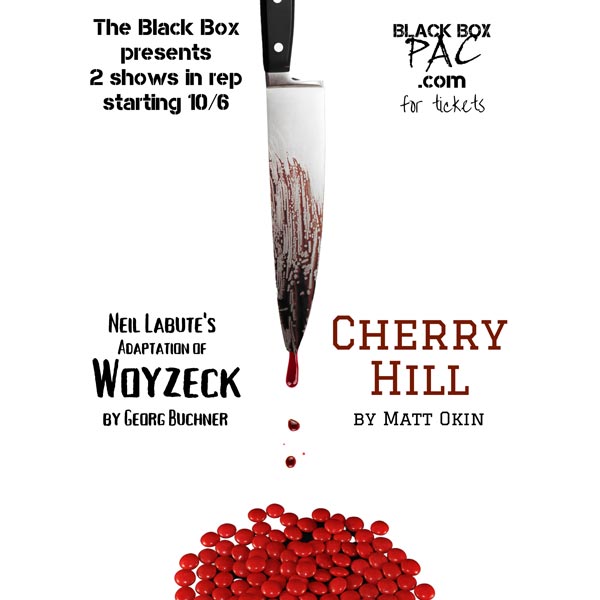 (ENGLEWOOD, NJ) -- The Black Box, NJ's prime incubator for new and under produced works by world-class artists, is pleased to kick off the 2022-23 Season with acclaimed playwright/filmmaker Neil LaBute's adaptation of Georg Buchner’s Woyzeck, "in rep" with Cherry Hill by Matt Okin this October! Alternating performances run from October 6th-October 23rd on Thursdays through Sundays at 8:00pm with select Sunday matinees: visit www.blackboxpac.com for the exact schedule and tickets–$30 for Adults, $25 Students/Seniors.

Originally presented by Theater for the New City in the early 2000's, Matt Okin’s Cherry Hill was greatly influenced by Woyzeck. Set in a small Maryland town just outside of Washington, D.C. in 1990, this surprising ensemble comedy concerns the TV-generation's inability to escape the confines of suburban society. Cherry Hill, from the pen of The Black Box's own Artistic Director, explores one young man's unwavering and desperate attempts to find truth and love amidst the now chaotic lives of the people from his past.

Neil LaBute is an award-winning playwright, filmmaker, and screenwriter. His plays include: bash, The Shape of Things, The Distance From Here, The Mercy Seat, Fat Pig (Olivier-award nominate for Best Comedy), Some Girl(s), Reasons to be Pretty (Tony Award nominated for Best Play), In a Forest, Dark, and Deep, a new adaptation of Miss Julie, and Reasons to be Happy. He is also the author of Seconds of Pleasure, a collection of short fiction, and a 2013 recipient of the Literature Award from the American Academy of Arts and Letters. Neil LaBute’s film and television work includes In the Company of Men (New York Critics’ Circle Award for Best First Feature and the Filmmaker Trophy at the Sundance Film Festival), Your Friends and Neighbors, Nurse Betty, Possession, The Shape of Things, Lakeview Terrace, Death at a Funeral, Some Velvet Morning, Ten x Ten, Dirty Weekend, Full Circle, Billy & Billie, Van Helsing, Out of the Blue, and House of Darkness.

Woyzeck is directed by Michael Gardiner. Cherry Hill is directed by Matt Okin. The Stage Manager is Eva Burke. The ASM/Board Op is Sofia Maravillas.  Tickets for Woyzeck and Cherry Hill are on sale now at www.BlackBoxPAC.com.  The Black Box is located at 49 East Palisade Avenue in Englewood, New Jersey.

The Black Box is a 501c3 nonprofit organization based in Northern New Jersey. The collaborative group of theater artists pivoted during the pandemic and the company has become NJ's incubator for new and under-produced works by world-class artists. Black Box began developing Eric Bogosian's 1+1 in NJ in November 2021; it received a Special NYC Premiere this past July and an early '23 Off-Broadway premiere is now in the works. Additionally, The Black Box's '21-'22 season included The Cleopatra Club by legendary filmmaker Paul Schrader, Ode to Joy by Broadway's Craig Lucas, and the recent world premiere production of Exposed by Beth Henley, as well as short works by John Guare and Caridad Svich. The full 2022-2023 Season, about to be announced very soon, will include revived classics in partnership with the Estates of Broadway and Off-Broadway legends as well as modern plays and musicals in collaboration with the creators. Artists include Edward Albee, Nicky Silver, Sam Shepard, Craig Lucas & Craig Carnelia, Ken Levine, and many more. Renowned percussionist and filmmaker Billy Martin has just started The Black Box's first residency by an acclaimed artist of other disciplines.