The Weeknd's After Hours Til Dawn Stadium Tour: A Wild Excursion Into the Unknown
NEWS | FEATURES | PREVIEWS | EVENTS
﻿
By Jennifer Petrics 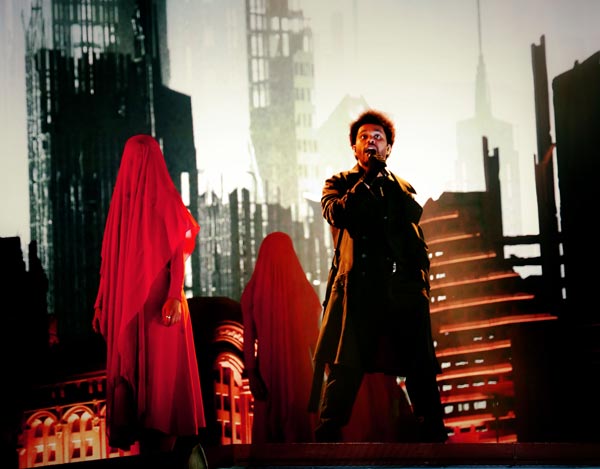 On July 16, 2022, The Weeknd performed at MetLife Stadium in East Rutherford, NJ.  The show was opened by Mike Dean and Kaytranada.  Jennifer Petrics was there to cover the show and take photos.

Swaths of fans in red coats splashed through the crowd… interspersed with “XO” shirts.  This was just the first indication, or testament, to the legions of fans which The Weeknd has spawned in his career.

This wasn’t just a concert; it was an art show, interlaced with an ecstasy-driven indulgence of sight and sound… or as Mike Dean said, who opened the show, a “Synth extravaganza!”  Among the set design/production (co-created by BINANCE in cutting-edge technology), there was a fully immersive cityscape—slightly reminiscent of Gotham City—bloodpumping bass, pyro, fog, and lights.  A choir of “red dancers” added to the dramatic effect, contrasting with the apocalyptic visuals and tenebristic feel.  Almost in a Bosch-like style, the city was set ablaze in hedonistic fashion… poised for the rapture takeover.  The production also had sort of taken on Noé-esque cinematic tones (Climax) and Frank Miller’s graphic stylization (Sin City). 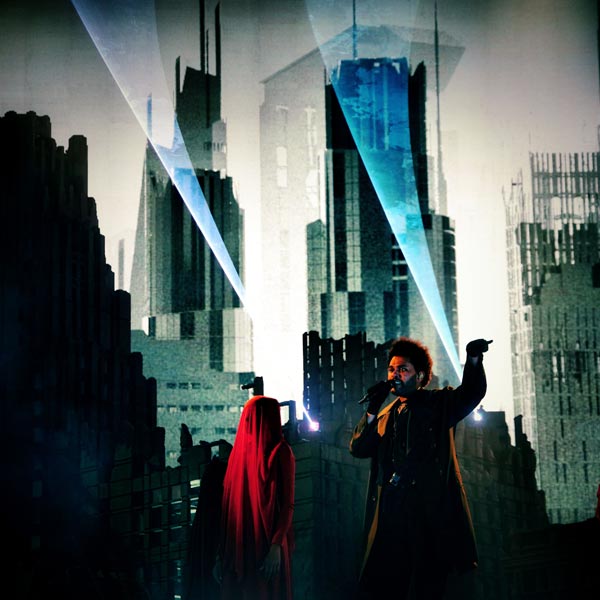 Indeed, it felt as though we entered into a cinematic universe which slowly crescendoed into a religious rave experience.  The Weeknd performed an anthology of hits; from the extended dramatic interlude of Alone Again to the brilliant solar climax of Blinding Lights… it was almost like the audience collectively entered a tunnel loop, vortex, or dimension… in which we were led out to bask in the warm afterglow.  A massive supermoon structure hung low over the set—perfect, because just a couple nights before, the super-bright Thunder Moon had risen.  Suffice it to say, The Weeknd brought the rain! 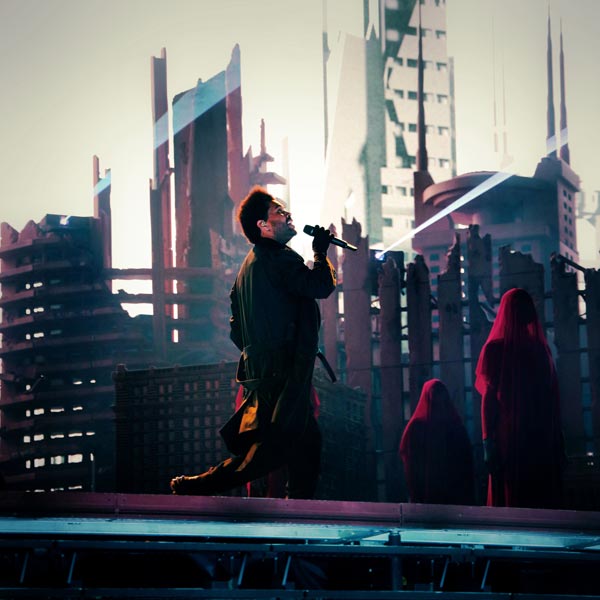 As many fans know, Prince’s Purple Rain is referenced a couple of times in The Weeknd’s music (in Faith and in Phantom Regret), and as if through some divine summoning, or ritualistic rain dance, the sky let out a heavenly light rain—just as Prince had conjured at Super Bowl 41… the spirits of legends were aligned.  Mirroring the lyrics exactly, fans were immersed in “the purple rain… all bathed in its grace.”  Life imitating, or demanding, art, in this case.  But, for The Weeknd, he brought all of the elements—fire and the rain—to a starlit stadium.  In a truly immersive experience, fans were given wristbands which brightly glowed at synchronized intervals of pulsing beats.  By the time Blinding Lights was performed, the stadium lit up like a celestial canopy, spliced with solid beams of light that stretched far into the night sky.  This vision was almost parallel to being transported through some sort of rapturous space travel. 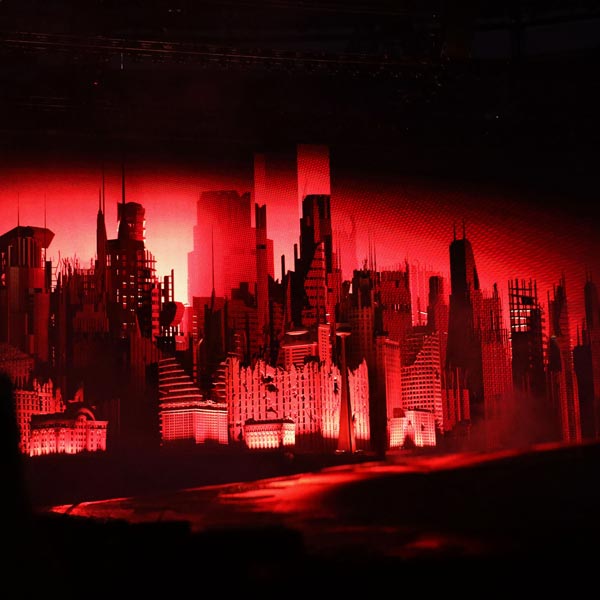 The Weeknd experience is like a requiem for the soul, morphing through this delightfully nightmarish transition—one which descends down a bleak path of spiritual dissolution in the After Hours, only to emerge with spiritual reawakening at Dawn.  One thing worth mentioning, too, is the new trailer of the HBO dramatic series, The Idol, which The Weeknd premiered at the beginning of the show and which has grown into an extension of his art.  It comes from the creator of Sam Levinson (Euphoria) and stars Lily-Rose Depp, The Weeknd, and more.

Throughout the After Hours Til Dawn Tour, The Weeknd is giving $1 from each ticket to the XO Humanitarian Fund to help feed millions of people on the brink of famine.  The U.S. and Canada tour continues in cities through September. 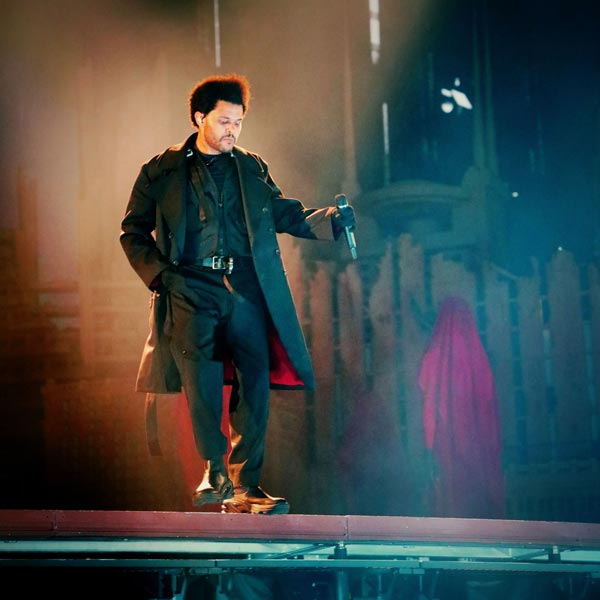 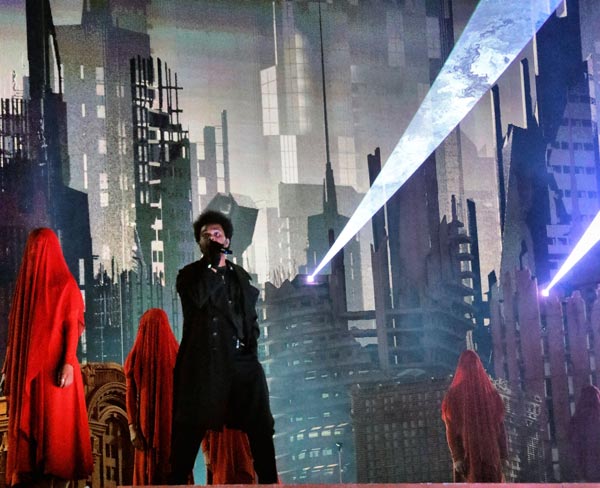 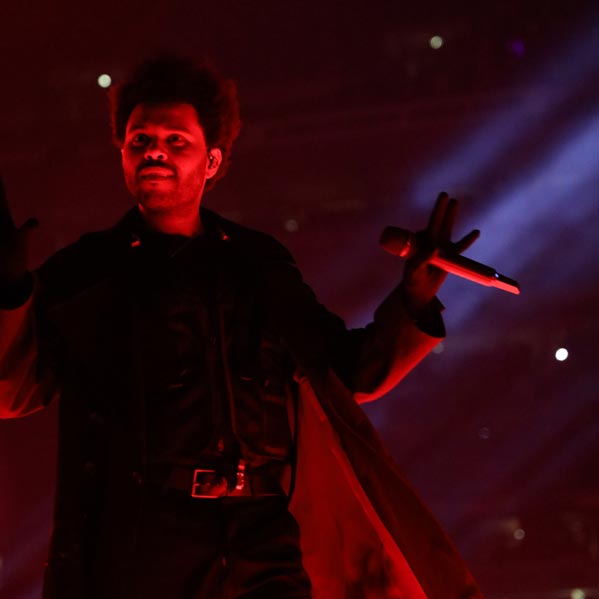 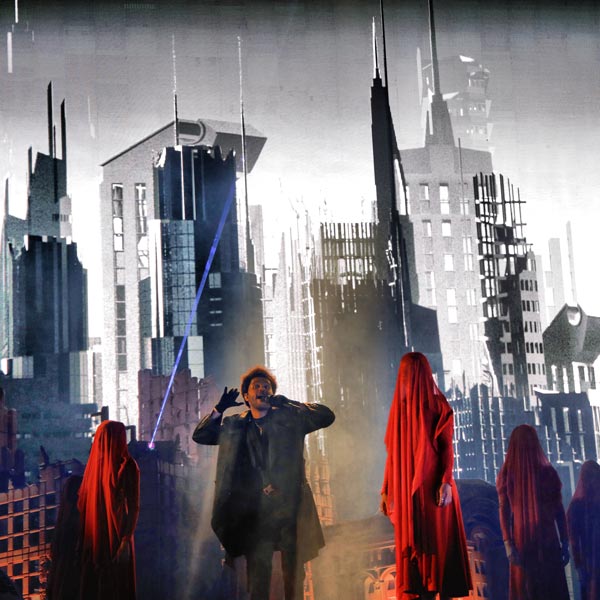 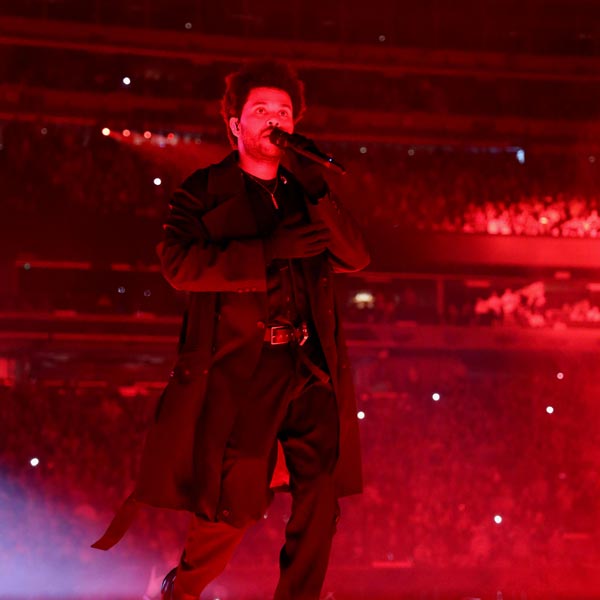 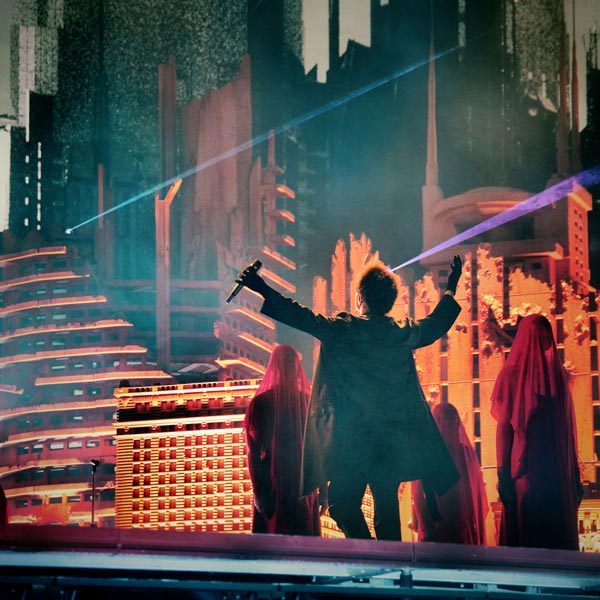 All photos by Jennifer Petrics