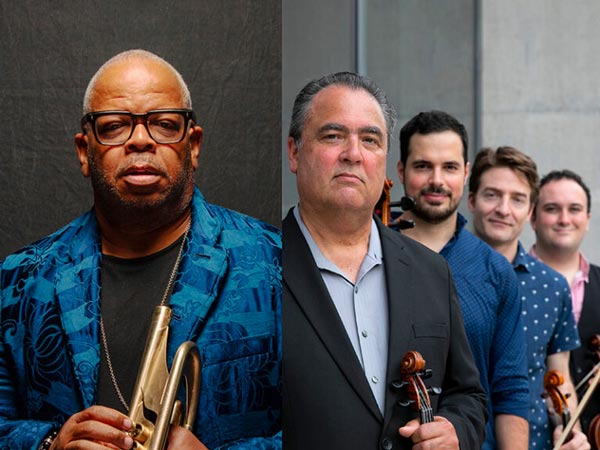 (NEWARK, NJ) -- On Thursday, November 10, 2022 @ 7:30pm, the 11th annual TD James Moody Jazz Festival will be kicked off at New Jersey Performing Arts Center (NJPAC) by trumpeter/composer Terence Blanchard and his electric ensemble The E-Collective and acclaimed neo-classical string ensemble Turtle Island Quartet with their 2021 Blue Note release Absence—a powerful tribute to the great Wayne Shorter. In this concert, two-time Oscar® nominee, and five-time GRAMMY®-winning trumpeter & composer Terence Blanchard celebrates both the brilliance of Shorter’s legacy and the inspiration he has given Blanchard, influencing his ever-expanding amalgam of music and storytelling.

Blanchard reimagines songs from across Shorter’s vast catalog and shares original music inspired by the legendary saxophonist—resulting in “a lush and dramatic soundscape that calls to mind Blanchard’s career as a successful film composer (The New Yorker)." The repertoire includes arrangements of Shorter’s original work, including “Diana” from Native Dancer and “When It Was Now” from Weather Report’s 1982 self-titled release. Blanchard’s compositions continue to expand on the reservoir of E-Collective tunes, utilizing a string quartet that is uniquely equipped for the full range of color and expression of the Blanchard sonic & stylistic sphere. A heart-stopping string quartet work titled “Second Wave,” written by Turtle Island’s own David Balakrishnan, perfectly rounds out the recording.

Since its inception in 1985, the Turtle Island Quartet has been a singular force in the creation of bold, new trends in chamber music for strings. Winner of the 2006 and 2008 Grammy Awards for Best Classical Crossover Album, Turtle Island fuses the classical quartet esthetic with contemporary American musical styles, and by devising a performance practice that honors both, the state of the art has inevitably been redefined. Cellist nonpareil Yo-Yo Ma has proclaimed TIQ to be “a unified voice that truly breaks new ground – authentic and passionate – a reflection of some of the most creative music-making today.”