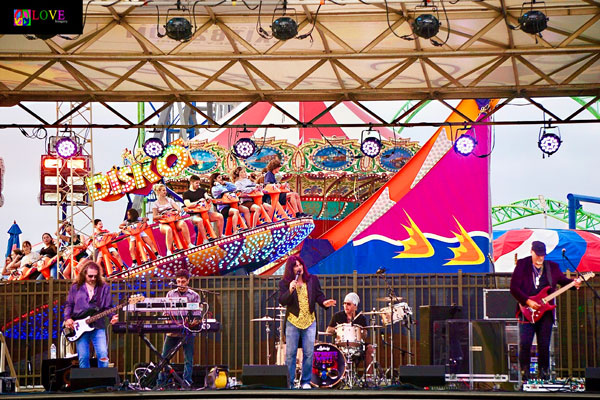 It’s somewhat misty on the beach in Seaside Heights, NJ this Thursday, July 7, 2022, as music lovers ready themselves for a concert by the Journey tribute artists, Separate Ways the Band. The group’s performance is part of the Jersey Shore resort’s 2022 line-up of free summer concerts scheduled on Monday and Thursday nights throughout the months of July and August.

Before tonight’s show begins, we chat with several music lovers in the crowd who tell us what brought them here tonight. Says Stan from Toms River, “We used to come to concerts in Seaside Heights when they had them at the North end of the boardwalk. We heard a Journey tribute band there, so when we saw this concert announced on the beach tonight, we decided to come.”

Adds Regina from Toms River, “It’s a nice atmosphere here at the beach stage, which is close to all of the boardwalk stands, rides, and restaurants.”

Continues Stan, “We saw the actual band, Journey, twice. Since we’re local, we checked the Seaside Heights calendar of events, and now we’re planning to come to even more shows,” before concluding, “How can you go wrong with a concert at the beach? How can you beat this setting?”

Recalls Mike from Ortley, “I’m here because I grew up at the height of Journey’s music during my high school days, and as far as I’m concerned, there’s not one bad Journey song.” Robyn from Ortley agrees, adding, “This is our first concert here this season. You can’t beat it here in Seaside — you have the beach to your right and the boardwalk to your left,” prior to concluding, “I really like the energy here. For me, it’s all about the energy.” 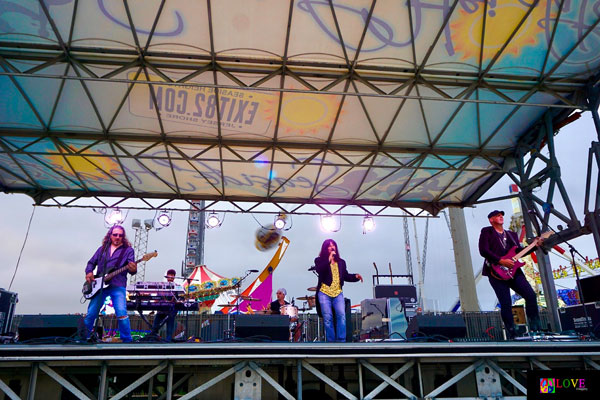 “How you guys doin’ out there” asks Gagliano, before he and the band launch into the tribute band’s namesake tune, “Separate Ways (Worlds Apart).” 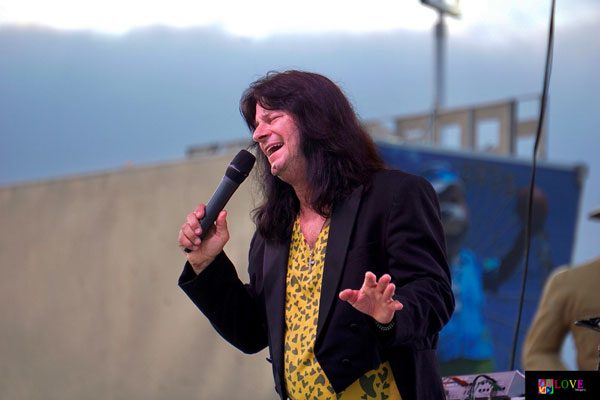 The driving beat energizes the music lovers in the crowd and audience members bop their heads as they sing along on the tune’s catchy chorus, “Someday, love will find you/Break those chains that bind you/One night will remind you/How we touched and went our separate ways.”

Following the band’s rendition of “Only the Young,” the crowd cheers and Gagliano jokes, “Seaside Heights, isn’t this humidity messing with your hair?”

Mike Corsaro starts off the next number, “Stone in Love” with an intricate guitar solo in which he incorporates the melody of the “Theme from Love Story.” 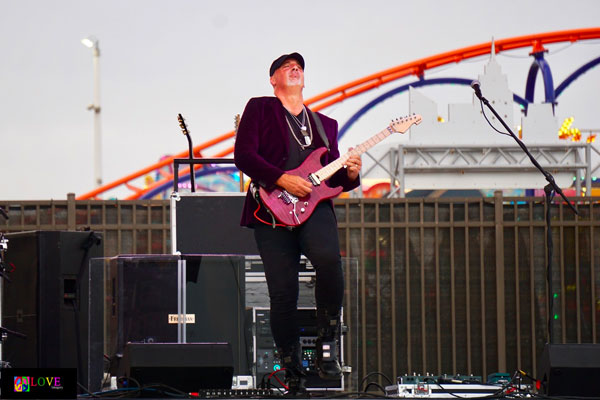 Fans cheer before swaying sway back and forth to the easy groove of “Send Her My Love” as Paul Vasa’s bass rocks. 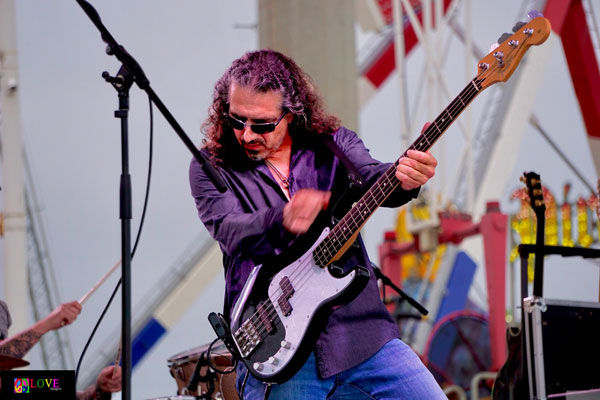 Gagliano acknowledges “Journey doesn’t write too many love songs” before he and his bandmates launch into the heartfelt power ballad, “When You Love a Woman,” an arrangement which features keyboardist Mick Loro playing a sweet piano solo.

A highlight of tonight’s set is Separate Ways the Band’s interpretation of “Open Arms” which has audience members singing out with gusto on the “So now I come to you with open arms” refrain before Corsaro plays a crying guitar solo.

Gagliano inquires, “Are there any Steve Perry fans out there?” When audience members cheer for the celebrated Journey vocalist, Gagliano jokes, “Do you want to hear his song, ‘Oh, Gertrude?’” before adding, “Please help us out, it’s in the key of ‘Z.’”

Launching into Perry’s solo effort, “Oh, Sherrie,” Gagliano croons the “Oh, Sherrie, our love/Holds on, holds on” chorus with ease as Tom Stewart rocks steady on the drums. 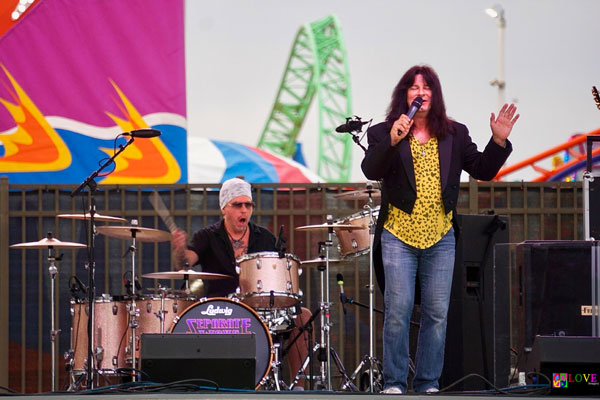 The band segues into “Who’s Crying Now” and the music floats out over the crowd as the audience sings along on the “One love, feeds the fire/One heart, burns desire/I wonder who’s crying now” refrain.

Gagliano says the next Journey song was “written about the city by the bay — San Francisco.” Entitled “Lights,” harmonies rule on the “When the lights go down in the city/And the sun shines on the bay” chorus as the lights of Casino Pier flash to the rhythm of the music. 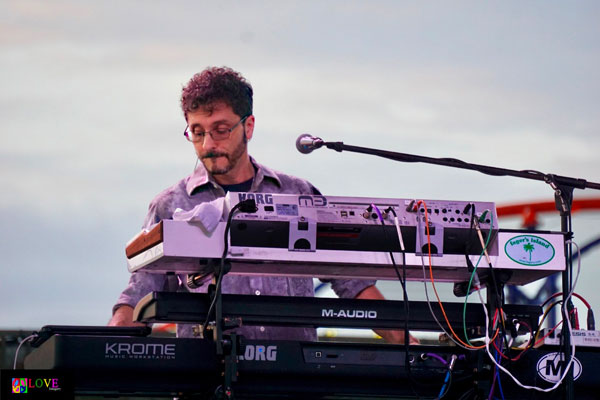 The audience applauds, and Gagliano says, “Give me something sexy on the drums, Tommy!” Drummer Tom Stewart responds by playing a funky beat to introduce the band’s next number, “Feeling That Way.” 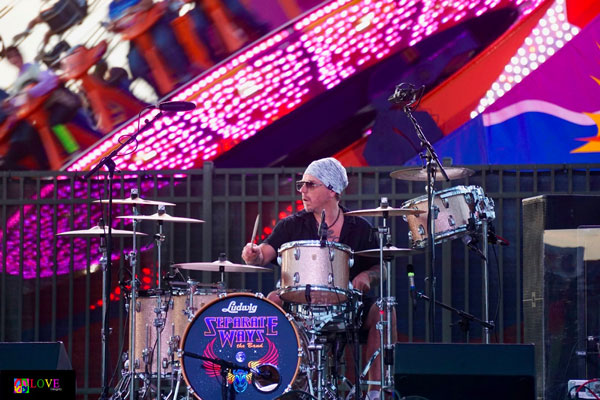 The crowd sways back and forth singing on the song’s “Na na-na na na” refrain, with some even waving flashlights in time to the music.

Audience members cheer for “Any Way You Want It,” a Journey song which many recognize from its use in commercials for State Farm and Southwest Airlines. The crowd energetically sings along on the infectious “Any way you want it/That’s the way you need it” chorus as music lovers dance to the music on the sand.

Following the power ballad “Faithfully,” the group concludes its set with Journey’s biggest hit, 1981’s “Don’t Stop Believin’” which has audience members dancing and singing on the ubiquitous “Don’t stop believin’/Hold on to that feelin’” refrain. 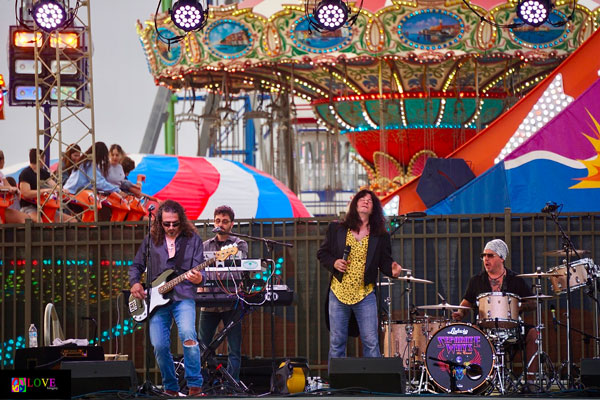 The crowd cheers and Gagliano thanks the audience by announcing, “We appreciate the love and support. You guys have a good night!”

As music lovers make their way off of the beach, we chat with several in the crowd who share their opinions of tonight’s concert by Separate Ways the Band. Whereas Gabby from Randolph declares, “This show was really good!” Dana from East Hanover exclaims, “It was spectacular — they sounded just like Journey!”

Nancy from Houston, Texas, acknowledges, “It was very cool. The music reminds me of my childhood, and I like how it brought everybody together,” before noting, “To be on the beach at night is a real summery thing.” Greg from Houston agrees, adding, “With all the rides in the background, this is classic Americana.” 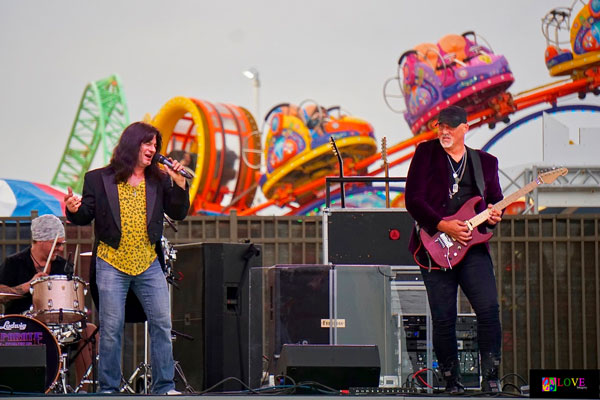 Lisa from Yonkers reveals, “I grew up on this music, and Separate Ways sounds very good.” Daughter Christina concurs, declaring, “They are really good! When we first got here today, we didn’t even know about the concert, but once we heard the music, we stayed.”

Lee from Long Valley acknowledges, “I’ve been a Journey fan since the 1980s and Separate Ways put on a good show — it was fun,” prior to noting, “It was cool just being here tonight. Now I can’t wait to come back again to see Air Supply on July 23.”

Lastly, we chat with Paula and Vicky, two friends from Brick. Whereas Paula asserts, “I love this band! This is my first time hearing them, and the lead singer sounds a lot like Steve Perry,” Vicky from Brick exclaims, “They’re great — the music was just gorgeous!” before concluding, “I got a list of shows for the rest of the summer. I’ll be back!” 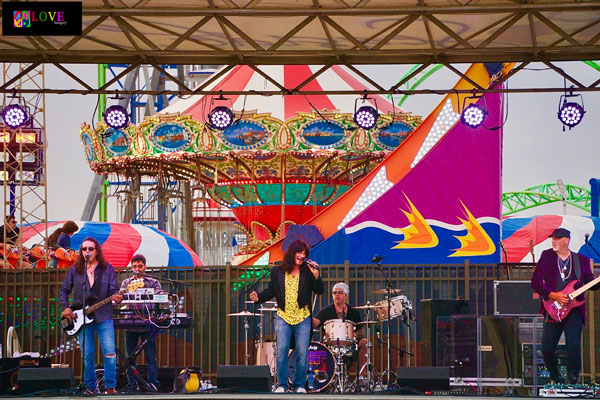 For info on free upcoming shows in Seaside Heights — including a Billy Joel tribute concert by Captain Jack on July 21, an AC/DC tribute by Dirty Deeds on July 28, October Rose on August 1, a Van Morrison tribute by Moondance on August 4, and Soul Shine, An Allman Brothers Concert Experience on August 25— please click on exit82.com.

For information on upcoming paid concert events in Seaside Heights — including Air Supply on July 23, America on Aug. 6, Greensky Bluegrass on August 13, George Benson on August 14, and the Seaside Summer Freestyle Fest on August 17, please click on seasideheightslive.com.