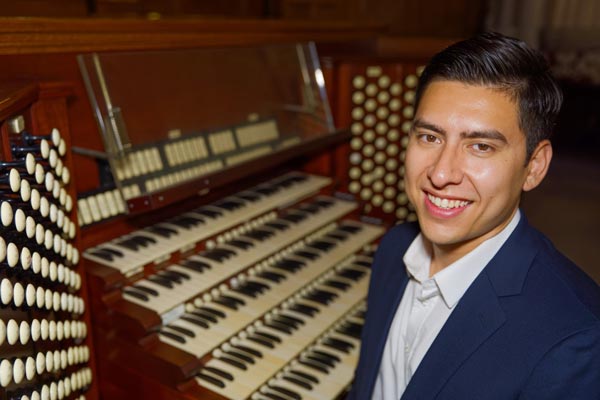 (OCEAN GROVE, NJ) -- As part of its ongoing organ recital series, the Ocean Grove Camp Meeting Association (OGCMA) will present concert organist Michael Hey, on Wednesday, July 27, 2002 at 7:30pm in the Great Auditorium.   This is a FREE concert.  The Great Auditorium is located at Pilgrim and Ocean Pathways in Ocean Grove, NJ.  All facilities are handicapped-accessible.

Described as "flashy" and "exciting" (The American Organist), concert organist Michael Hey has been increasingly visible on U.S. and international concert stages. Michael has performed solo organ recitals at Lincoln Center (New York), the Kimmel Center (Philadelphia), the Kennedy Center (Washington D.C.) and Davies Hall (San Francisco). He graduated in 2014 from The Juilliard School where he received both his Bachelor of Music and Master of Music degrees in organ performance under Paul Jacobs. Within one year of his graduation, he was appointed Associate Director of Music and Organist of St. Patrick’s Cathedral in New York City, where one of his first major tasks was to play organ for Vespers and Mass at St. Patrick’s Cathedral and Madison Square Garden for the first U.S. visit of Pope Francis.

In 2019, he performed solo recitals for the NYCAGO and two regional conventions for the American Guild of Organists.

Not exclusively a solo organist, Michael enjoys a varied career that includes collaborations with other musicians, solo piano recitals, improvising, and transcribing works. He has performed with renowned soloists including soprano Renée Fleming, tenor Matthew Polenzani, and mezzo-soprano Isabel Leonard. In 2016 he recorded an anthology with baritone Tim Krol entitled Robert Franz: Ordinary Man, Extraordinary Songs. Lately, he has been performing duos for organ or piano with violinist Christiana Liberis.

The Great Auditorium is located at Pilgrim and Ocean Pathways in Ocean Grove, New Jersey.

The origin of the present Great Auditorium organ was an instrument built by Robert Hope-Jones, an Englishman who immigrated to this country in 1903 and opened his own factory in Elmira, New York in 1907. The company received major financial support from Samuel Clemens (Mark Twain) who was a member of the board of directors and a great admirer of Hope-Jones.

This instrument was dedicated by a concert on the evening of July 3, 1908 by organist Mark Andrews, with over eight thousand persons in attendance. During the summer of 1908 the very famous concert organist Edwin H. Lemare gave a series of ten daily recitals in the Great Auditorium during the convention of the National Association of Organists. 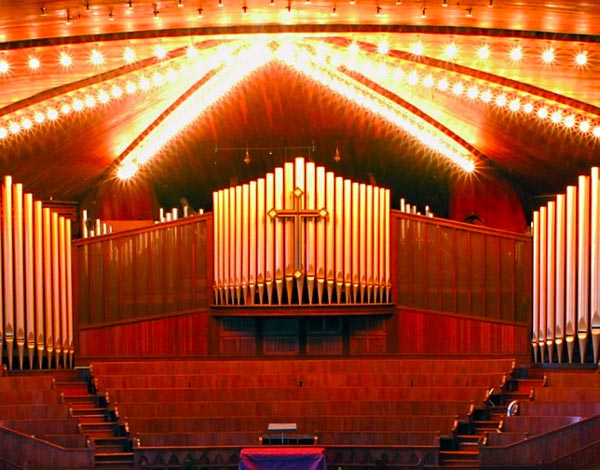 Since 1908 the organ has undergone several rebuilding projects. Beginning in 1974 and continuing through the present, a major expansion program was initiated under the leadership of Auditorium Organist, Dr. Gordon Turk and Organ Curator, John R. Shaw in an effort to create a more versatile instrument. In keeping with accepted standards of organ construction, full diapason, flute, and reed choruses were built for each of the major divisions. Currently the instrument consists of ten (10) divisions, totaling 207 ranks and 12,200 pipes, played from a console of five keyboards (manuals) and pedals. All of the restoration and expansion projects over the years have been funded through memorial contributions and generous gifts from benefactors. Several projects still await funding.

As the centerpiece of the Auditorium's music program the instrument is in constant use during the summer program, and it receives regular care and maintenance. It is used for the worship services, choral concerts, weekly organ recitals featuring the resident organist and numerous guest recitalists, and other concerts with instruments and orchestra.

Today the Great Auditorium organ is in the category of ‘the largest pipe organs of the world’, and has acquired and international reputation; it is celebrated for its musical expressiveness, versatility and powerful sonority. The versatile tonal capabilities of this instrument enables the organist to perform a broad range of repertoire, and it is heard by thousands of listeners each season.