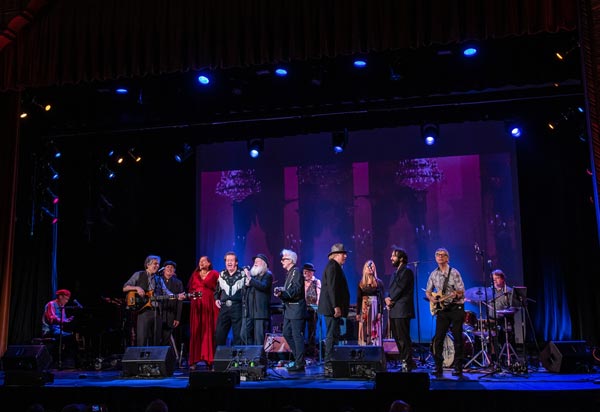 (NEWTON, NJ) -- The Newton Theatre presents The Last Waltz Celebration featuring The THE BAND Band with the TTBB Horns & special guests on Saturday, April 1, 2023.  Doors are at 7:00pm, the concert begins at 8:00pm.

From Woodstock to The Last Waltz, The Band has been at the center of rock and roll’s most esteemed happenings. They are regarded as one of the most popular and influential rock groups and are considered to be pioneers of Americana music. The Last Waltz, The Band's legendary Thanksgiving 1976 farewell concert that was immortalized in Martin Scorsese's 1978 music documentary of the same name, featured more than a dozen guest artists including Bob Dylan, Neil Young, Joni Mitchell, Van Morrison and Eric Clapton, and showcased The Band’s classic hits like "The Weight," "Up On Cripple Creek," "The Night They Drove Old Dixie Down," "Ophelia" and "It Makes No Difference," to name a few.

The THE BAND Band’s Last Waltz Celebration is a spectacular tribute revisiting that magical Thanksgiving evening. In addition to performing The Band's hits, reminiscent of The Last Waltz, The THE BAND Band also becomes the backing band for the guest artists representing many of the special guest performances from that night: Bob Dylan’s “Forever Young”, Ronnie Hawkins’ “Who Do You Love”, Van Morrison’s “Caravan” and so many more.

The THE BAND Band is the only nationally touring group dedicated exclusively to The Band’s music, bringing it to life with authentic, true-to-form renditions of their extraordinary repertoire. From hit songs as well as deep cuts from their classic albums to the historic collaborations with Bob Dylan, The THE BAND Band delivers with the passion and commitment for which The Band was renowned. Touring since 2007, they have earned critical acclaim for their musicality as well as for the incredible energy they create at their concerts. Gary Solomon (bass, vocals), Jack Kraft (keyboards, accordion, mandolin, vocals), Josh Radin (guitar, vocals), Loren Korevec (piano, vocals) and Matt Crawford (drums, vocals) bring a show not to be missed!

"The THE BAND Band really nails it! Their shows recapture the incredible vibe that was unique to The Band." - George Walsh, WCWP-FM, NY

The Newton Theatre is located at 234 Spring Street in Newton, New Jersey.