Makin Waves Song of the Week: "Give Yourself a Chance" by Jack Skuller
NEWS | FEATURES | PREVIEWS | EVENTS
By Bob Makin 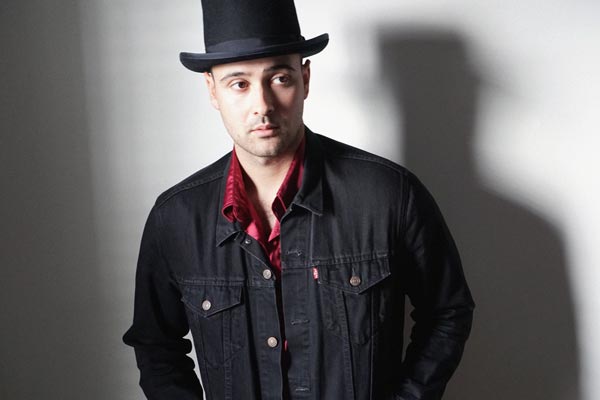 Singer-songwriter-guitarist Jack Skuller premieres at New Jersey Stage his video for the new single, “Give Yourself a Chance,” the Makin Waves Song of the Week. PHOTO BY ERIN O’COWEN

After 12 years of performing original music and releasing singles and EPs since the age of 14, North Jersey singer-songwriter-guitarist Jack Skuller will release his debut full-length album, “Draw the Lucky Card,” on Oct. 14.

The LP’s three singles include the uplifting “Give Yourself a Chance," the video for which premieres here at New Jersey Stage and is the Makin Waves Song of the Week.

As the Makin Waves Song of the Week, “Give Yourself a Chance” also can be heard between 6 and 8 p.m. on Sept. 16 on “Radio Jersey” at ThePenguinRocks.com. If you miss it, you also can tune in any time in the archives at The Penguin or MixCloud.

The music video for “Give Yourself a Chance” focuses on the classic fortune-telling Zoltar machine, featuring "The Living Zultar” played by impressionist Robert Nash.

“For a song about taking a leap -- with notes of encouragement and romance -- I wanted to create a music video about fortune,” said Jack, who produced and edited the clip. “Luckily, I came across Robert Nash’s ‘Living Zultar’ recently while on tour. He does a fantastic job, and you can see in the video that people are amazed and hypnotized by him. I also thought it would be visually interesting to play off of the dichotomy between Robert and an actual Zoltar machine on Jenkinson’s Boardwalk in Point Pleasant Beach, sparking the question: who gives the fortune teller a chance?”

Other singles from “Draw the Lucky Card” are the eccentrically danceable “Watercolor Rain” and the smoky power-pop track “Asking for a Friend,” co-written with art-pop singer-songwriter George Usher. The LP’s 10 tracks were written during the pandemic and recorded in the Poconos at Velvet Elk Studio with producer Don DiLego, plus drummer Scott Campbell, keyboardist Michael Hess, and bassist Don DiLego.

Known for a career of writing and performing blues-infused rockabilly and rock ‘n’ roll, Jack leans into a more Americana sound and reveals an intensely personal lyrical focus on “Draw the Lucky Card”. For more, visit www.jackskuller.com.