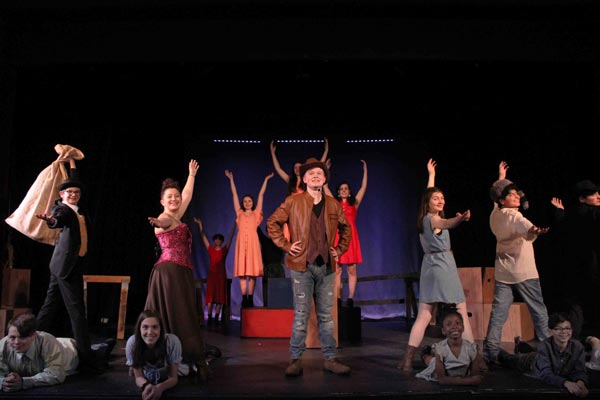 (HACKETTSTOWN, NJ) -- Centenary Stage Company’s Young Performers Workshop’s 2022 Summer Festival of Shows has just been announced and will feature performances of I Do! I Do! I Do! I Do!, A Coupla White Chicks Sitting Around Talking, and Two for Four. Performances will run August 5-14 in the Little Theatre located at 400 Jefferson St, Hackettstown, NJ.

I Do! I Do! I Do! I Do! Is a musical with book and lyrics by Tom Jones and music by Harvey Schmidt. The story of soul mates navigating life together, the show begins with Michael and Agnes on their wedding day. Their vows behind them, they look forward to spending the rest of their lives together. We watch as they go through their wedding night jitters, raise a family, and negotiate midlife crises. Michael eventually admits to his infidelity, and, although Agnes is angered by his actions, she forgives him, and the couple reconciles. They rediscover how much they really need each other. Then, after fifty years of marriage, the couple leaves their house to the next pair of newlyweds.

A Coupla White Chicks Sitting Around Talking is a comedy set in the suburban Westchester County kitchen of Maude Mix, who is having a tough day: her husband is off on a weekend spree with his secretary, and she can't get rid of the pesky neighbor who has just moved up from Texas. Hannah Mae Bindler badgers Maude into friendship and the two eventually join forces against their errant and erring husbands.

Two for Four is a series of one-act plays. A one-act play is a production that is shorter than a typical length play that features one act with no intermission.

Centenary Stage Company’s Young Performers Workshop is directed by Broadway, movie, and television alumnus Michael Blevins. Some of Blevins’ previous credits include director and choreographer of the National Tours of Babes in Toyland, Aladdin, and Tom Sawyer, and most recently he directed and choreographed the NYC revival of Seesaw. Blevins also directed and choreographed his original musical Count to Ten at the New York Musical Theatre Festival. He has worked with many Tony and Academy Award winning directors and choreographers including Sir Richard Attenborough, Woody Allen, and Bob Fosse. Michael Blevins has performed with many professionals including Michael Douglas, Victor Garber, Brooke Shields, Beth Leavel, and Robert Downey Jr. He has appeared in several Broadway productions including Bring Back Birdie, Neil Simon’s Little Me, and Tony winning Tap Dance Kid in which he created the role “Winslow”. He is most widely known for his portrayal of Mark in the movie A Chorus Line. Most recently, Blevins joined artists around the world to celebrate one of America’s greatest art forms and performed selections from Bob Fosse’s DANCIN’ at City Center in the Career Transition for Dancer’s Benefit Gala.