Bob Burger returns with the wonderful “The Domino Effect”

“I thought I was going to have to quit,” recalled Bob Burger.  “Because it was too painful to play.”

In June 2021, Burger had to leave the stage during an Elvis Costello tribute show in Red Bank.  Back stage, covered in sweat, Tony Pallagrosi assembled the EMT staff for the Count Basie Theatre.  That move likely saved his life as he soon learned from the EMTs that it was a heart attack. He was taken in an ambulance to Riverview Hospital and had a stent operation within the hour.

The heart attack slowed him down for a while, but paled in comparison to what came next - a diagnosis of spinal stenosis earlier this year.

“I had a really severe case,” explained Burger.  “I had a ton of pain - primarily in my legs - and I wasn’t able to stand or walk for very long.  When I would do a gig, I’d do it and would be in pain for the first 45 minutes before it would kind of settle down.  It was really bad.”

Burger tried all of the non-invasive treatments and physical therapy, but nothing helped. He knew he couldn’t sit down and play as it affected his singing.  Bob always believed he would hang it up if he couldn’t play the way he wanted to, so he decided to have spinal fusion surgery in March.  By June, he was already starting to play shows again.  Just in time for the release of The Domino Effect - his first solo album in a decade.

“I had the surgery and it was 100% successful,” he said. “Pain is completely gone and I feel fine.  It’s like I feel 5 years younger!”

Remembering that pain, Bob said, “I really couldn’t walk a block.  My wife and I would go for a walk in the morning and I’d go a block and then had to lie down on the curb and wait for the pain to subside.  Then I’d get up and try it again.  I had a rough year, but I think it’s behind me now.” 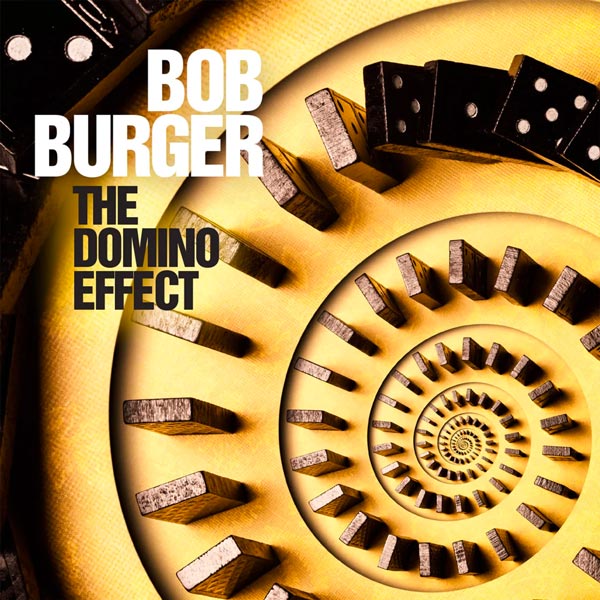 The Domino Effect is a tremendous album and it’s great to hear new Bob Burger songs again.  He has been releasing albums with The Weeklings since his last solo album, but always with the sixties/Beatles vibe that the band is known for.  This album gets back to his regular style of writing, which has a wide range of influences.  If you are a fan of classic rock, you’ll love this record.

Burger noted that some of the songs were written soon after his last album was released, but when The Weeklings started up the project was put on ice. The pandemic inspired him to finish it with the addition of 3-4 more recently written songs.

“I look at this as a continuation of my last solo record,” he explained.  “When I went to Plinky (Giglio) to start working on it, he figured that it would sound just like The Weeklings.  He was surprised that it doesn’t sound anything like them; it sounds just like a Bob Burger record, which it is.”

The album starts off with one of my favorite tracks - “Even If You Don’t.”  It’s a song that sounds like it could easily have been on his last record, The Day After, and includes lines that remind me of something John Lennon might have written.

and you can ask me to rewrite our story, but baby I won't…

Because I know how much you love me... even if you don’t.”

The tracks on this album show the freedom Bob has when he’s writing songs for himself.  They all sound very differently, yet he’s able to blend the various styles in the same way he does with his live shows.  They all carry the same vibe, energy, and memorable lyrics.  He’s such a great songwriter that it’s easy to know the lyrics to entire songs after hearing them just once.

Most of the tracks come straight from his imagination, but he does bring up health and how that changes someone on “The One Eyed Jack” with the line “Things kind of change with a heart attack / you can only move forward and never go back.”

Another one of my favorites is “Merely Beautiful” which has the kind of short, subtle, and melodic solo that one used to hear in songs by artists like Buddy Holly and The Beatles. It adds the type of layering that makes a three minute song so perfect.

“I want to ride your St. Catherine’s wheel and take every punch that you pull

I wanna know if your colors are real or are you just merely beautiful?”

The Domino Effect has one strong track after another.  With the myriad of sounds and styles, it’s the type of record you want to just play from start to finish.  Songs like “I’m Free,” “The Suicide King,” “Only A Way” and “Two Bodies” would be highlights for most songwriters.

On July 12th, Bob Burger and his band were at The Saint in Asbury Park to film a video for the song “Pain In The Ass” - one of the tracks he’s been playing live for many years.  He has been in many music videos with The Weeklings, but this was his first as a solo artist.

“We did the video thing first and you have to play the song about ten times,” he explained.  “We did it first before the audience was in the room and then we let them in.  The whole idea of the video was to have a lot of audience shots.  When I play ‘Pain In The Ass’ they tend to dance and point at each other and that was what we wanted to capture.  So we did that and then I did an hour set, most of the songs on the record and some old songs too.

“Glen (Burtnik) is really good at video conceptualization and all of The Weeklings videos are kind of Glen’s thoughts,” said Burger.  “Mark Laidlaw then helps to get it into something that’s real. Video concepts are not my wheelhouse, but this one is pretty simple - a performance video with the audience.  Mark had it all figured out in his head and he’s going to put it together.”

Beyond music, Bob’s other accomplishments extend to careers as a copyright and technology attorney and computer software consultant. At college age with an interest in recording and electronic music, Bob earned a degree in electrical engineering, graduating as valedictorian of the engineering class at Penn State University. He later continued his studies in the field of intellectual property law at Rutgers Law School. After earning a J.D. degree with honors, Bob joined the premier New Jersey firm, McCarter & English, LLP, where he continues to practice technology and entertainment law as Special Counsel.

Burger said the album title reflects how "Things happen to a person early in life that start the dominoes tumbling. I realized how certain experiences influenced my decisions that followed those experiences, and those decisions influenced later decisions. If not for meeting a particular person, or participating in an event, everything that followed would have been different. It takes a while to appreciate how far reaching those tentacles are.”

In the track “Rock and Roll Band,” Bob takes a look at his life. Even though he’s been successful professionally, he can’t imagine his life without music. It’s a track that hits harder when you think of how close that might have come for him.

“On July 12th, we played it for the first time,” said Burger.  “It’s kind of like the most autobiographical song and kind of sums up where my head is in terms of life.  I enjoy it and like what it says. I don’t know what I would have done without music.  I probably would have blown my brains out; it’s just something I have to do.”

Promoting a solo record is always difficult, but even more so while you are in multiple bands.  In addition to his solo shows, Burger has shows with The Weeklings and Max Weinberg’s Jukebox.  Keeping all of those songs in one’s head is a bit of a challenge.

“It can be confusing,” admits Burger.  “I needed to go over the Max stuff because I hadn’t played with him in a while.  I tend to refresh whatever I need to refresh before each gig.  After a while, it’s all part of the same Zen.  I just know a lot of songs.”

Due to the schedules for his other bands, there won’t be a pure Bob Burger tour but he does have shows coming up. On  Friday, August 5th, Bob will be playing with John Merjave at The Wonder Bar, opening for Steve Forbert.  Then comes some shows with The Weeklings and Max Weinberg including the Fest for Beatles Fans in Illinois on August 14th.  Bob will be back with John Merjave at Hailey’s Harp & Pub in Metuchen on Friday, August 19 and he will have his Everchanging Band perform on Sunday, August 28 at The Proving Ground in Highlands.

There are few songwriters anywhere as talented as Bob Burger and that talent runs through The Domino Effect.  Let’s just hope we don’t have to wait another decade for his next solo album.