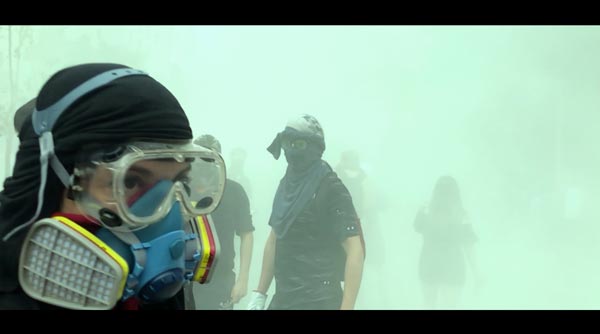 (JERSEY CITY, NJ) -- Jersey City Theater Center (JCTC) and Thomas Edison Film Festival (TEFF), together with Ukrainian JC and Ukrainian and Jersey City artists, present The Power of One on Friday, April 8 at 7:30pm. The screening takes place at JCTC Studios (165 Newark Avenue, Jersey City). The Power of One is a program of 7 unique documentary shorts from Belarus, Chile, and the United States, with proceeds supporting Ukraine.

Jane Steuerwald, TEFF Executive Director, will introduce the films and lead a discussion and Q&A. “The Thomas Edison Film Festival is glad to have the opportunity to present compelling short films that focus on the power of just one person to make positive change in the world. JCTC and TEFF have come together to do our part, in solidarity with our Ukrainian brothers and sisters and in honor of their bravery,” shares Steuerwald.

“This selection of documentary shorts is a powerful reminder of our collective obligation as global citizens to ensure everyone has a voice – and that voice can be heard loud and clear. JCTC remains committed to raising awareness of the plight of Ukrainians, and we are honored to partner with TEFF to play our role in making that happen,” adds Olga Levina, JCTC’s Executive Producer.

The evening will feature Return to Calais by Edith Goldenhar (Jackson Heights, NY, U.S.) - In May 1940, Edith Goldenhar’s late mother Paulette was a teenage refugee on the roads of northern France, after fleeing the Nazi invasion of Belgium.  In 2018, Edith followed her mother’s vivid wartime diary on a pilgrimage to honor Madame Ducatel, a stranger who harbored Paulette during the bombing of Calais; Generation 328 by Veranika Nikanava, (Belarus and New York, NY, U.S.) - A group of mothers defy Europe’s last dictatorship, fighting to free their children from draconian sentences in brutal Belarusian prisons; Utopia of the Outraged by Marcelo Lagreze (Santiago, Chile) - Chile woke up on October 18th, 2019. The streets were flooded with people demanding to be heard; My Brother is Deaf by Peter Hoffman Kimball (Bethesda, MD, U.S.) - A moving and personal film told through the heart and mind of a boy with a deaf younger brother; Guadalupe Maravilla & The Sound of Healing by Rafael Salazar and Ava Wiland (Brooklyn, NY, U.S.) - Sculptor, performer, cancer survivor and sound healer, Guadalupe Maravilla, combines his personal experiences with indigenous knowledge to create new rituals for healing; Hello Sunshine, by Joe Quint (Brooklyn, NY, U.S.) - Roz Pichardo is more than a domestic violence and gun violence survivor, she’s a warrior. She gives comfort to families of murder victims and has saved the lives of over 500 men and women in active opioid addiction; and Dawn by Timon Birkhofer (Pasadena, CA, U.S.) - Five unique individuals take us on a journey where their achievements shine beyond preconceived ideas of what is possible.

Find more information and reserve tickets ($25) at www.jctcenter.org and www.seetickets.us/jctcenter. Accessibility accommodations for these events are available upon request.

Following The Power of One, JCTC will screen Julia Blue on Thursday, April 14 at 7:30pm, also at JCTC Studios. Julia Blue is a moving feature-length film written and directed by Roxy Toporowych, a first-generation Ukrainian American. The film follows Julia (Polina Snisarenko), a bright university student, who is preparing for a life abroad when an unexpected romance sparks between her and English (Dima Yaroshenko), a damaged soldier returning from the war zone in eastern Ukraine. Toporowych will lead a discussion and Q&A following the film. This event ($25) will also be held at JCTC Studios and, similarly, all proceeds will provide direct support to the people of Ukraine.

For 41 years, the Thomas Edison Film Festival – an international juried film competition – has been advancing the unique creativity and power of the short form. TEFF advances and supports the work of diverse filmmakers who often represent an under-served constituency and who may not have the opportunity for live public exhibition. The Festival welcomes all genres including narrative, experimental, animation, documentary, screen dance and hybrids. We celebrate films which address the environment, race and class, immigration, the LGBTQ+ community, people with disabilities, and issues of social justice. TEFF films are artistic, empathetic and engaging works which simultaneously teach and entertain.

Since 2006, JCTC has provided a platform for all artistic voices to be heard. When we share stories through the arts, we spark meaningful dialogue that leads to greater understanding and respect. And, as a result, we build better communities together.