(RED BANK, NJ) -- The acclaimed HBO Max series, “The Gilded Age” has been renewed for a second season! The show first began streaming January 24, 2022, and features the character of T. Thomas Fortune, played by actor Sullivan Jones. The show takes place in New York in 1882 during the American Gilded Age, a time of economic change and conflict between the old and new worlds.

The popularity of the show has not only introduced millions of viewers to T. Thomas Fortune, but it has put a spotlight on the T. Thomas Fortune Cultural Center, the former home of the social justice crusader, located in Red Bank, NJ. This Black History month the Cultural Center has been in a whirlwind of media excitement, with the Cultural Center featured on the front pages of the Asbury Park Press and Two River Times on the same day. Executive Director Gilda Rogers has appeared on New Jersey Spotlight News, News 12 and on Valentine’s Day Rogers and the Cultural Center’s Chairman of the Board Kerwin Webb, were featured in a CBS news report.  Webb explained the importance of Fortune and the increasing awareness about his life and the contributions he made for Black people during his time.

When "The Gilded Age" first debuted, the Cultural Center hosted a sold-out watch party on Zoom with Jones. Eager participants learned from Jones about the set design, props, costumes, and his experience as an actor in the show. Most notably, he described the process of transforming into Fortune, which included learning how to work an authentic printing press. He said, “They flew in from L.A., this real printing press from the 1870s. Before we shot the scene, I met the guy and he quickly showed me how to use the machine. It’s mad complicated! There’s a wheel, there's a crank, you have to put ink down, there's all these moving parts.” Jones has agreed to visit Red Bank in May to thank the show’s watchful fans for their support. Stay Tuned. 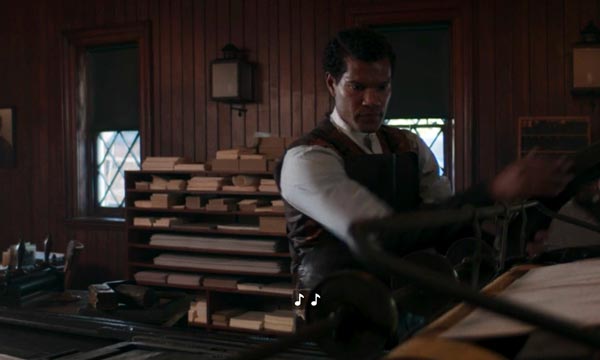 Fortune made a name for himself as a journalist and newspaper publisher, during the Gilded Age in New York, where his newspapers, the New York Globe, Freeman, and the New York Age, were published. Fortune was a dynamic orator, who spoke truth to power. He also started the first successful Black political organization in 1887, The National Afro-American League, a precursor to the NAACP. With a second season, there’s hope that the show will continue to develop Fortune’s character.

Rogers said, "This is an exciting time, when you think about this home, where T. Thomas Fortune lived, right here in Red Bank, and that it was going to be demolished. It's unbelievable what T. Thomas Fortune said, "I shall live again'" and it's happening."