Something truly wicked this way comes! East Coast metal is alive and well as the New Jersey-based quartet PIERCED have just released the first track/video "You Can't Play God With Me"  from their recently completed debut album, Cheers to Brutality, which will be released March 18th.

PIERCED embellishes the power and integrity of old school thrash metal adding their unique blend of thunderous vocals, riveting guitar mastery, brutal power bass, and a relentless drum assault. The result is a sonic experience perhaps best described as an amplified and rejuvenated interpretation of combat metal with groove. Working class ethics, pride in their roots, and a defiant demeanor personify the boys of PIERCED and their music conveys the essence of these values with a roar!

The band was formed in August 2017 with former members of NJ local bands Division 1.1, Lion-Hearted and Freak of the Day. The band was the brainchild of vocalist Rob Middleton and guitarist John Barone, who immediately began writing aggressive, groove style metal with blistering vocals and riffs. The two fortuitously found the perfect drummer in Joe D’Aqui, whose punishing drum attack and ability to change tempos from groove to all out chaos was just what they were looking for. Bassist Mike Thomas completed the lineup, and the band was off and running.

On the new video, bass player Pete Rizzi shares, "We wanted to introduce the band with an in-your-face video that accurately depicts the intensity of our live show and the aggression we bring to the stage. That is where we are most comfortable, interacting with a crowd and going fucking ballistic!"

Singer Rob Middleton adds “'You Can’t Play God with Me' basically describes your modern day power trippers, the people who seek control over the majority of us, whether it’s corporations, so-called experts or our own government, telling us what they think is best for us. They use the fear machine to force conformity which for a guy like me, immediately triggers resistance."

In mid-2018, the band recorded an 8-song offering with Eric Rachel of Trax East Studios in South River, NJ. It was recorded live with full takes, no digital wizardry or “punch-ins!” Seven of the songs on that album were re-recorded and are included on Cheers. In 2019, PIERCED opened for Ratt at the BergenPac Center and despite the polarity of the two bands, PIERCED received a standing ovation, earning the respect of the Ratt audience; a tribute to the power of their live show and their ability to win over crowds of all types.

In late 2020, PIERCED were approached by renowned guitarist/producer Mike Orlando, who had come to know PIERCED through mutual friends and members of the Old Bridge Metal Militia, with an invitation to work together. Orlando wanted to capture the high energy of PIERCED’s live show and give their sound some creative enhancements. Midway through the recording process bass player Mike Thomas left the band and was quickly replaced by Pete Rizzi of rock band Who on Earth. Pete brought a uncompromising low end presence to the band’s overall sound and a unique groove that was an additional contribution to an already unique sound.

Despite several Covid related delays, the energized band and their fearless producer forged on. Cheers to Brutality, coming March 18th, is a 13-song collection that is guaranteed to keep your horns in the air from start to finish with no filler and no ballads! It is metal, loud and proud, raw and powerful! 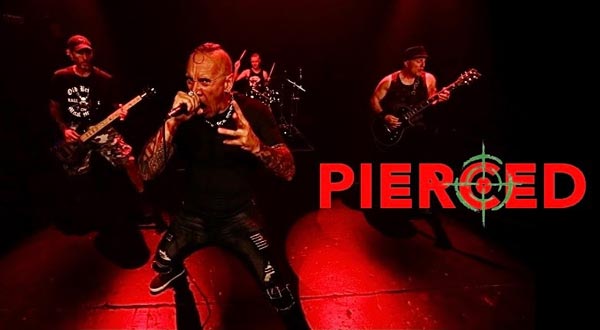 Photos by Sean Klein, Eye of the Beholder Photography