(NEW YORK, NY) -- The producers of Oh God, A Show About Abortion have announced that the limited engagement of Alison Leiby’s critically acclaimed comedy has been extended through June 30 at the Cherry Lane Theatre.

Alison Leiby's summer started with a bang and ended with a visit to Planned Parenthood. In between, she had two root canals, one very scary trip to the “Fertility” section of a Missouri CVS, and a dozen or so meltdowns about what to wear to an abortion, naturally. In her new show, described as “humane and deeply funny” by the New York Times, Alison walks through the stupid minutiae, the backwards practices, and the surprising perspective that comes with exercising your reproductive rights.

Presented by Ilana Glazer (“Broad City,” “The Afterparty”) and directed by Lila Neugebauer (The Wolves, The Waverly Gallery), Oh God, A Show About Abortion was hailed by the New York Times as the “Best Political Comedy of 2021.”

“While we’re alarmed at how timely and necessary Oh God has turned out to be, we’re humbled by the overwhelmingly positive response to the show,” said producers Mike Lavoie and Carlee Briglia. “We’re profoundly grateful that Alison will continue sharing her hilarity and insight with theatergoers into the summer.”

Oh God will take a hiatus June 5–12 before returning to its regular performance schedule June 13–3o: Monday through Saturday at 7:00pm, with Saturday matinees at 3:00pm. Tickets are on sale at OhGodShow.com.

After select performances, Bad Robot Productions will host talkbacks at the Cherry Lane Theatre to continue the conversation. Attendees will have an opportunity to donate to participating organizations Planned Parenthood, A is For, and the Center for Reproductive Rights, with Bad Robot Productions matching all resulting donations. 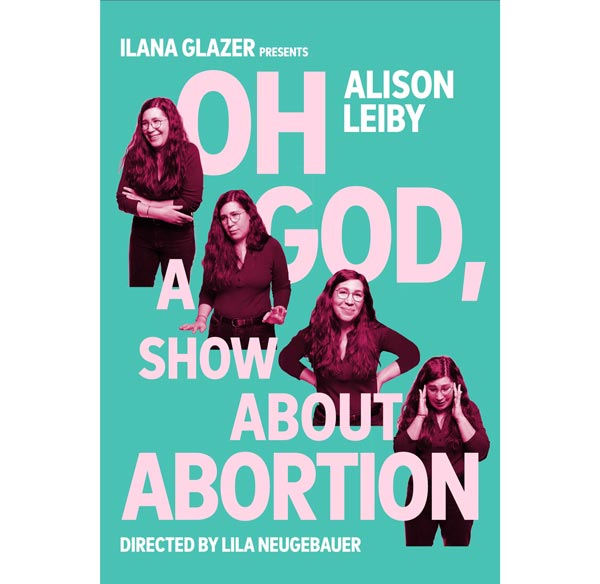 On Thursday, May 19, there will be a post-show conversation on “Advocacy Through Art.” This panel discussion will delve into the role that art plays in destigmatizing the conversation around abortion and other “taboo” women’s health issues. Speakers include Caren Spruch, National Director of Arts and Entertainment Engagement for Planned Parenthood Federation of America; Kellie Overbey, Co-Founder and Executive Director of A is For, a New York-based arts organization dedicated to ending the stigma against abortion care; award-winning playwright Sanaz Toossi; and acclaimed filmmaker Nia DaCosta. Additional speakers to be announced.

On Thursday, May 28, there will be a post-show conversation following the 3pm matinee with author and editor Shelly Oria. Her new book, I Know What’s Best for You, is an explosive, intersectional collection of essays, fiction, poems, plays, and more, which explores the universality of human reproductive experiences, as well as their distinct individuality. I Know What’s Best for You is a collaboration with the Brigid Alliance, a nationwide service that arranges and funds confidential and personal travel support to those seeking abortion care.

On Wednesday, June 1, the producers will host a post-show conversation with the Center for Reproductive Rights, a global human rights organization of lawyers and advocates who ensure reproductive rights are protected in law as fundamental human rights. Domestically, the Center argued Dobbs v. Jackson Women’s Health, the case likely to overturn Roe v. Wade this June, per the recently leaked draft Supreme Court decision.

The Cherry Lane Theatre is located at 38 Commerce St, New York, NY 10014. Tickets are $37-47 with premium tickets available at OhGodShow.com.