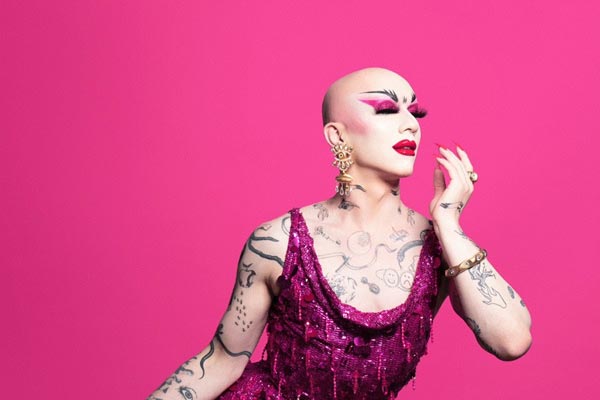 (NEWARK, NJ) -- All hail the queen! Sasha Velour: The Big Reveal Live Show makes it way to Newark on Thursday, April 20, 2023 at 8:00pm in NJPAC's intimate Victoria Theater. Sasha Velour is a gender-fluid drag queen. Her first book, The Big Reveal, An Illustrated Manifesto of Drag, will be published April 2023 with Harper.

Velour is the creator and star of the one-queen drag spectacular Smoke & Mirrors, which toured from 2019-2022 to over 80 theaters around the world including the Folies Bergère and the London Palladium. She founded the acclaimed New York City drag show NightGowns in 2015 and was featured on Season 9 of RuPaul’s Drag Race in 2017.

Sasha, the winner of RuPaul’s Drag Race presents an immersive evening of drag, storytelling and live art in celebration of her new book The Big Reveal: An Illustrated Manifesto of Drag coming April 4, 2023 (Harper). This book is a quilt, piecing together memoir, history, and theory into a living portrait of an artist and an art. From an iconoclastic drag queen comes an equally singular, thought-provoking book that brings necessary and sparkling substance to our understanding of drag, queerness, beauty, and liberation!

The book documents the histories and controversies surrounding drag alongside Sasha’s own personal story. The live show includes iconic new performances, an in-person conversation with a special guest star, and an audience Q&A. Book signing to follow, with books available for purchase in the lobby. Upgrade to VIP tickets for a pre-show meet & greet / photo op and an exclusive art print.