(LOVELADIES, NJ) -- Looking for a way to show its support for the people of Ukraine? The Lighthouse International Film Society is hosting a benefit for World Central Kitchen and their life-giving work feeding the citizens of that war-torn country.  They will be screening Olga, which tells the 2014 story of a teenage Ukrainian gymnast exiled in Switzerland while training for the Olympics, on Wednesday, May 11th at 7:30pm. The screening takes place at Long Beach Island Foundation of the Arts & Sciences, 120 Long Beach Blvd, Loveladies, NJ.

As she prepares for competition, back home her friends and neighbors rise up to overturn the brutal dictatorship of Viktor Yanukovych, leaving Olga distant from the land she loves and powerless to help her struggling family.

“We chose this film because it offers a glimpse into the life of a Ukrainian girl forced to make difficult choices during a dangerous time of great uncertainty,” says Natalie Caricato, Director of Lighthouse International Film Society. “And we hope her story will bring the LBI community together for a common cause.”

Admission is $10 online / $12 at the door. Proceeds of ticket sales to benefit World Central Kitchen.  Click here to purchase tickets online. Olga will be presented In multiple languages with English subtitles.

While the film is not a documentary, it does star Ukrainian gymnast Anastasia Budiashkina in the role of Olga, and features other members of Swiss and Ukrainian national teams. The film’s French director,  Elie Grappe, explains his strategy this way, “This film is about being exiled—a heroine torn by her loyalties to her country and career in a geopolitical situation beyond her control. I did not want to work with professional actors. I had to try and capture the truth using gymnasts. Which is why I chose these elite young athletes to explore the difficulties reconciling personal desires with the course of history.”

“Lighthouse International Film Society chose to benefit World Central Kitchen with our ticket sales because they have been on the ground feeding the hungry since the day after the initial invasion,” explains Ms. Caricato. “Our hearts go out to the Ukrainian people and we believe this film will bring awareness to their present struggle and great need.” 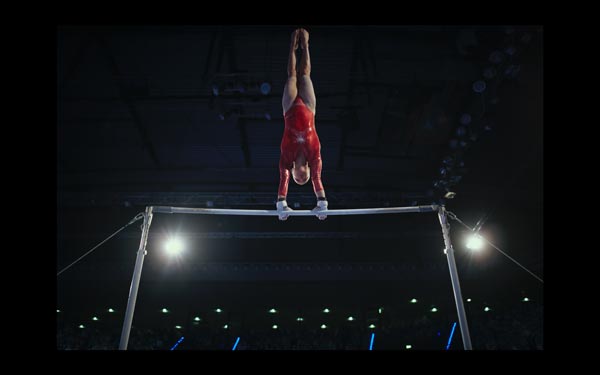