NBCU LAUNCH and the New Jersey Motion Picture & TV Commission present an in-depth conversation about breaking into television via ZOOM on August 17, 2022 at 7:00pm. Eric Anthony Glover (Tom Swift), an alumnus of the NBC TV Writers Program, and Afia Nathanial (Chicago Med), an alumna of the NBCU LAUNCH Female Forward directors initiative, will share their personal stories about getting their start in television, provide insight on how the programs helped in their career journey and offer practical advice on navigating the television industry.

The conversation will be moderated by Michael Pogarian, Manager at NBCU LAUNCH & TV DEI, with opening remarks by Elizabeth Parchment, Director of Marketing and Chief Diversity Office with the NJ Motion Picture & TV Commission.

Eric, Afia and Michael will be answering questions on the spot, so be sure to drop a question below and tune-in for the first LAUNCH TALKS in New Jersey! Click here to register. 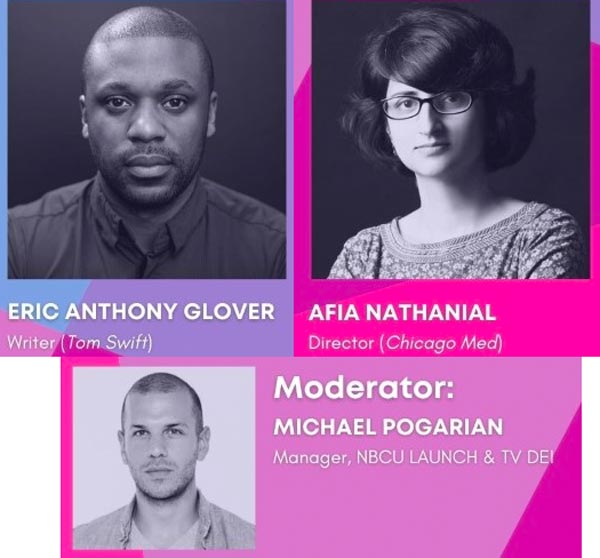 Eric Anthony Glover (panelist) is a feature writer, TV writer, and graphic novelist. Most recently, he wrote as a Staff Writer and Story Editor on The CW’s TOM SWIFT. Eric studied screenwriting at Sarah Lawrence College. After his sci-fi feature script earned him a fellowship through Final Draft’s 2016 Big Break Screenwriting Contest, Eric went on to write his first drama pilot, which earned him representation. Additionally, Eric was selected for the 2020 Humanitas Prize New Voices award, NBC’s Writers on the Verge 2020-21 fellowship, the 2021 Sony Pictures Television Diverse Writers Program, and the 2021 WarnerMedia Access Writers Program. As a writer for the arts and entertainment company Meow Wolf, Eric developed storylines and wrote scripts for immersive science fiction exhibits across the country. His graphic novel, BLACK STAR, was published in 2021 as a title in Abrams ComicArts’ imprint, Megascope. He is managed Echo Lake Entertainment and represented by the Culture Creative Entertainment agency.

Afia Nathaniel (panelist) has roots in Pakistan and Afghanistan. Her debut feature film “Dukhtar” (Daughter) premiered at Toronto (2014) becoming Pakistan’s Official Submission for Foreign Language Film at the 87th Academy Awards®. The film played to critical acclaim in over 20 countries, became the Critics’ Pick (Village Voice) and the People Magazine’s Pick of the Week, and won several awards. “Dukhtar” was nominated for a Gotham award and the Women Film Critics Circle award for the “Best Foreign Film by or About Women." The screenplay for “Dukhtar” has been invited to the Library of the Academy of Motion Picture Arts & Sciences as part of their Permanent Core Collection. Afia graduated from Columbia University with an MFA in Film Directing (Dean’s Fellow). Most recently, Afia directed her first episode of television on Season 7 of the NBC and Wolf Entertainment hit series “Chicago Med” as part of the NBCU LAUNCH Female Forward directors initiative and will return for the show's eighth season.

Michael Pogarian (Moderator) is an award-winning producer and the Manager of TV Programming DEI at NBCUniversal where he helps oversee creative development programs for emerging TV writers, directors, and below-the-line talent. He also works with external industry partners to enhance DEI across the company’s entertainment networks TV studio group. Prior to this role, Michael was an Assoc. Creative Producer at Fullscreen where he co-created and led the AT&T Hello Lab Mentorship Program, that brought together entertainment industry leaders including Common, Lena Waithe, and Taika Waititi with filmmakers from diverse backgrounds. He developed, produced and distributed 10 short films that premiered on DirecTV Now. At Fullscreen he also developed award-winning interactive digital content and social media series. Michael has also worked in unscripted development and production at Magical Elves (Project Runway, Top Chef). He graduated from Boston University with a BA in Film and TV Production.

When Thomas Edison and his team invented the movie camera in West Orange, the inextricable link between New Jersey and motion pictures was born. Beginning in the early days of the silent era and continuing in the present day when an historic amount of production is taking place here, the film industry is essential to New Jersey’s past, present and future.

The New Jersey Motion Picture & Television Commission has supported and nurtured this creatively vibrant and economically vital industry for over 45 years. The Commission’s knowledgeable and experienced staff assists filmmakers with all their needs -- financial incentives, permits, regulations, production services, site selection and clearance. The Commission, part of the Business Action Center within the Department of State, attracts and supports production work and promotes infrastructure growth for the economic and image benefits the state derives.