After the pandemic subsided early this year, veteran tenor saxophonist Lance Bryant was trying to think of ways to create live performances resulting in gigs for many of the musicians who had lacked work during the shutdown. “I had been arranging for other bands for years,” he said. “In April of 2022, I started working on arrangements and various music I had, and I decided to create my own big band. I contacted many musicians I had worked with to see who might be available and who might be interested in working with me on the project. Once I had the musicians, I needed a venue to present the music.”

So, he contacted Wayne Winborne, Executive Director of Rutgers-Newark’s Institute of Jazz Studies. Winborne was amenable to the idea and made IJS’ Clements Place jazz club available for Bryant’s big band. “I chose Monday nights,” Bryant said, “because I knew most musicians would be available. And, I chose musicians from New Jersey because of camaraderie and their familiarity with each other. A sense of community is what happens when that many musicians get together to play, and Clements was the right place to do that.”

Clements Place is a small comfortable club on the grounds of the Rutgers University campus in Newark. It was opened in 2018 as a venue for jazz and other music events in Rutgers’ Graduate Residence Building at 15 Washington St.

Bryant’s arranging talents were honed while he was a student at Boston’s Berklee College of Music.  “I attended Berklee in the Composing & Arranging curriculum,” he said. Classmates included saxophonist Branford Marsalis and trumpeter Wallace Roney. “I came to New York, Brooklyn, in 1985, he added.  “I joined Lionel Hampton’s Big Band in 1990. My first professional arrangement was the jazz classic, ‘Where or When’, for Lionel Hampton’s band. Hampton liked my work and asked me to do other arrangements. That began a 30-year career as an arranger. Also, in 2001, I was commissioned to do eight charts for Grammy nominated vocalist Carla Cook to perform with the NDR Big Band in Hamburg, Germany.

“This current band,” he continued, “features several good arrangers in their own right.” On Monday night, November 7, the band played trumpeter Bill Mobley’s arrangement of “Farewell to Dogma” a Mulgrew Miller piece. “At a previous performance (the first performance by the Big Band, in September),” Bryant said, “we did my arrangement of a piece by Donald Brown entitled ‘Waltz For Monk’. There is a deep connection between Bill Mobley, Mulgrew Miller, (pianist) Donald Brown and James Williams, all from Memphis. I worked with James Williams in 2003. He was a mentor to all of us.”  Also arranging for the band is trumpeter Eddie Allen. On the 7th, the band played Allen’s arrangement of a James Williams piece “Alter Ego” 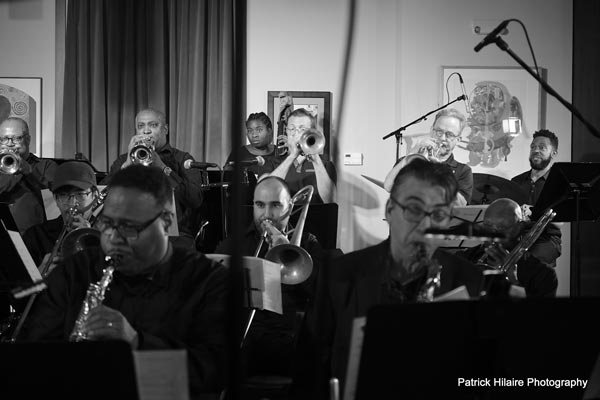 Mobley moved to New York from Memphis in 1987. As a sideman, he has played with the Mingus Dynasty Band, the Maria Schneider Orchestra, and the Toshiko Akiyoshi Orchestra, among others. The late James Williams also moved from Memphis to NYC in the 1980s and is probably best known for the four years he spent with Art Blakey and the Jazz Messengers. He played with Dizzy Gillespie, Freddie Hubbard, and Kenny Burrell and was Director of Jazz Studies at William Paterson University from 1999 until his death in 2004. Allen, originally from Wisconsin, has also played with Blakey and Gillespie as well as tenor saxophonist Billy Harper and trumpeter Jon Faddis.

The future of jazz, in Bryant’s opinion, is “in good hands. We see a lot of jazz studies programs in this area. NJPAC Jazz for Teens is a strong program. The New Jersey Youth Symphony Orchestra has a jazz program. Several people in this band are mentors to young people in the Jazz House Kids Program. Julius Tolentino has a wonderful program at Newark Academy in Livingston.” Baritone saxophonist Dave Schumacher, a member of Bryant’s big band, was co-founder of the NJYSJO and is now its Director of Jazz Workshops.

Bryant’s daughter, Caylen, is the bassist in the big band and is currently studying at Juilliard. “There are many young people (in the band) who are quite talented,” Bryant said. “I think also that the young people studying today have a more academic approach to the music than prior generations. They embrace the technical aspects of the music. But I’m seeing some young players that are really digging into the tradition and bringing it forward – alto saxophonist Emmanuel Wilkins and trumpeter Bruce Harris, to name just a couple.”

With regard to attracting young audiences to jazz, Bryant was asked if there is a role for rap and hip hop in jazz. His response: “I think jazz has a role in hip hop and rap. I see the genre as similar to bebop,” he said. “The tempo of the music, the rapid-fire delivery of the music. Both have their roots in jazz and are extensions of jazz. Both genres were created by young minds exploring a different form of the music. Both were incredibly creative offshoots of the art form”.