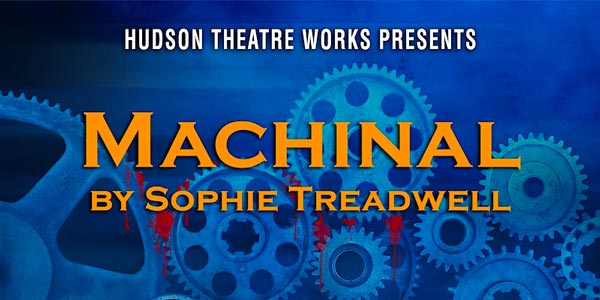 (WEEHAWKEN, NJ) -- Hudson Theatre Works' “Theatre On The Edge” presents Machinal by Sophie Treadwell from October 20 to November 6, 2022 at the Theatre at the Wilson School in Weehawken.  In this 1928 feminist tour-de-force, a young woman struggles to find her place in a society that was not made for her. Treadwell uses theatrical expressionism to portray a world that has become impersonal and unfeeling; a world that only has room for those who are willing to submit and conform.

Throughout the play, the young woman repeatedly finds herself in opposition to the mechanization and materialization of the modern world. When she refuses to submit to society’s demands, she disrupts the rhythm and intention of the modern “machine.” The machine was not designed to accommodate disruptions. It was not designed for women to thrive. The young woman’s inability to submit to the demands and expectations of a society that values conformity over individuality is what ultimately leads to her fate.

Despite having been written nearly a century ago, Machinal shows us a world that is strikingly similar to our own.  It’s the men in the young woman’s life who have the power to determine her fate. How, then, can a woman fight back? How can she resist and also survive? Is she destined, as one character states, to “submit—right to the end”? In a society that holds no space for her, she must find a way to make a space for herself.

Inspired by the infamous 1927 Snyder/Gray murder trial, this rarely-performed masterpiece  portrays the hardened soul of America in the Machine Age.  Machinal follows the life of Young Woman who is constrained by a society that favors men and money.

The show is directed by Frank Licato with stage design by Gregory Erbach, lighting by Luck Pearto, Costumes by Ann Lowe, Sound Design by Donald Stark, props by Beatriz Esteban-Messina and stage Managed by Dawn D’Arrigo.

The play kicks off their 10th season of plays by women playwrights.

Performances take place Thursday - Saturday at 8:00pm and Sunday at 3:00pm. (Thursdays are pay what you can!) Tickets are $25; $15 for students/seniors. Tickets are available for purchase online. They are requiring that all audience members wear masks. Theatre at the Wilson School is located at 80 Hauxhurst Avenue in Weehawken, New Jersey.

Their ticket prices are low because that’s the way we want them to be and we are committed to making our theatre affordable to all.  It’s a conscious decision, not spur of the moment. Broadway ticket prices are unaffordable for far too many people. They want to see people from all economic levels in our audience, from all different backgrounds. HTW is built on the idea of community and shared conversation. Attending a play sparks ideas, examines the experience of our common humanity. In these difficult times, who doesn’t need to be reminded of that?

Hudson Theatre Works boasts a growing and adventurous community genuinely hungry for challenging performance. We honor and advance that appetite by choosing material that is aesthetically diverse and rooted in authenticity. From highly theatrical world premieres to distilled re-imaginings of modern classics, our plays inspire reflection, spark discussion, and get the blood pumping. Our low-price tickets prices make it possible for everyone to experience first rate live performance on a regular basis. Our PlayWorks readings of new plays engages both the playwright and the audience in the creation of a new work and our in house group, The Forge, is a creative playground for writers, actors and directors to develop fresh work and perfect their craft. Our children’s theatre has sold out audiences asking for more. We are proud that the critics refer to us as “A Theatre On The Edge!”