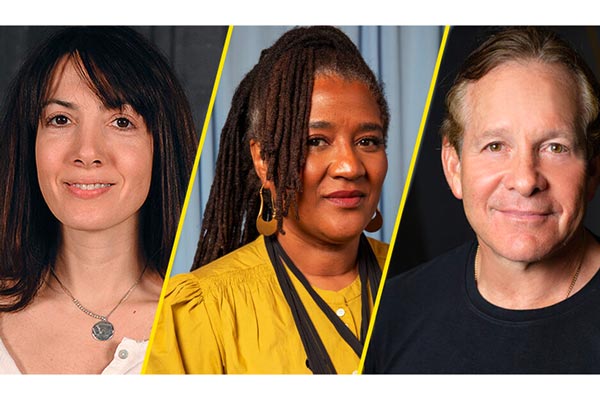 Artistic Director David Saint says about the season, “It’s time to come back! We have assembled a rich and diverse group of shows to entice our audiences to return to live theatre for entertaining and fulfilling celebrations of the human spirit.”

Following a successful return to live performances this past season, George Street Playhouse’s 5-show, 2022/23 season will begin in October and run through May.

George Street Playhouse will start its 2022/23 season with the highly anticipated and accoladed drama by award-winning playwright Mfoniso Udofia, Her Portmanteau. This stunning and moving play about a Nigerian family in America centers around reconciliation, reinvention, and at its heart, the relationship between mothers and their daughters. Making her directorial debut on this production is George Street Playhouse’s Artistic Associate Laiona Michelle, who wowed audiences in Little Girl Blue both at George Street Playhouse and off-Broadway.

The fourth installment in Udofia’s epic nine-play Ufot family cycle about the Nigerian American identity and the universality of a family’s unconditional love is not one to be missed. Mfoniso Udofia’s Her Portmanteau will run October 11-30.

This holiday season, George Street Playhouse is producing the World Premiere of Joy, a heartwarming and powerful biographical musical based on the life of Joy Mangano—the entrepreneur, inventor, best-selling author, and self-made millionaire whose journey epitomizes the real American Dream.

This uplifting true story is about one woman’s triumphant climb, from divorce to single motherhood and bankruptcy, to becoming a wildly successful dynamo that all started with the invention of a mop – her Miracle Mop!

Joy is a feel-good musical about finding yourself through determination, imagination, and reinvention with a twist, and is sure to inspire audiences long after they leave the theatre. This is a one-of-a-kind, moving and empowerment-charged musical theatre event that is not to be missed!

"We're so thrilled to welcome back Ken Davenport, as well as the dynamic music team of AnnMarie Milazzo and Andy Einhorn (A Walk on the Moon), with the world premiere adaptation of Joy. This new show features perhaps the most exciting new musical score I have heard in years! We are proud to premiere this wonderful show!" says Artistic Director, David Saint.

Says Joy Mangano, “Some of my happiest childhood memories are of seeing musicals - I have to pinch myself that this incredible show is based on my life! Joy, the musical, is exactly the inspiring and uplifting show that makes musicals magical – everyone will walk out filled with Joy!’”

The George Street Playhouse World Premiere production is presented in association with Sandi Moran and Ken Davenport. Joy, book by Ken Davenport, music and lyrics by AnnMarie Milazzo, choreographed by Joshua Bergasse, directed by Casey Hushion, will run from December 7-30.

Next, George Street Playhouse is thrilled to bring two-time Pulitzer Prize winning playwright Lynn Nottage to its stage for the first time ever with her lightning-charged comedy Clyde’s, which she says is about “the healing power of food!”

Centering around the formerly incarcerated kitchen staff at a truck stop sandwich shop, Clyde’s is a story about living with and through your mistakes – and the importance of a shared dream in bringing people together; like the quest for creating the perfect sandwich. Don’t miss your chance to revel in this tale of reinvention and redemption, nominated for 5 TONY Awards – including Best Play!  Clyde’s will be onstage January 31 and continue through February 19, 2023.

This Spring’s musical event is the 2005 Broadway and Off-Broadway hit, The 25th Annual Putnam County Spelling Bee! This charming musical comedy tells the tale of six middle school “misfits” in Putnam County, NY finding themselves through one of the most competitive and brave journeys adolescents can embark on – a Spelling Bee! With a book by Rachel Sheinkin, music & lyrics by William Finn, conceived by Rebecca Feldman, and helmed by returning director Colin Hanlon, this Tony Award-winning timeless and hilarious story about self-discovery proves that W-I-N-N-I-N-G (and losing) isn’t everything.

The 25th Annual Putnam County Spelling Bee will run from March 14 through April 9, 2023.

This “Guttenberg Bible” is funnier than the original! Rounding out George Street Playhouse’s 2022/23 Season is Tales From the Guttenberg Bible, a charming new autobiographical comedy from veteran screen actor Steve Guttenberg (Three Men and a Baby, Police Academy, Cocoon). Strap in for this rollercoaster ride from the Guttenberg’s family home on Long Island to the glamor of Hollywood as Guttenberg himself tells-all – like how he broke into the Paramount Lot and – well, you’ve got to buy a ticket to hear more! Directed by George Street’s own Artistic Director David Saint, this surefire hit, featuring run-ins with everyone from Tom Selleck to Gregory Peck, will entertain from the South Shore to the Silver Screen.

Tales From the Guttenberg Bible will run in a limited engagement April 25 and continue through May 21, 2023.

ubscriptions are now on-sale to secure tickets to this sure to sell quickly must-see event of the season!

Patrons who subscribe to all 5 plays save 20-percent on regular ticket prices and enjoy access to exclusive subscriber benefits, like hassle-free ticket exchanges and discounts on additional seats. To subscribe, call our Patron Services office at (732) 246-7717 or email us at PatronServices@GeorgeStPlayhouse.org.

Under the leadership of Artistic Director David Saint since 1997, and Managing Director Kelly Ryman since 2013, George Street Playhouse produces groundbreaking new works, inspiring productions of the classics, and hit Broadway plays and musicals that speak to the heart and mind, with an unwavering commitment to producing new work.  As New Brunswick’s first producing theatre, George Street Playhouse became the cornerstone of the revitalization of the City’s arts and cultural landscape.  With its 45-year history of producing nationally renowned theatre, the Playhouse continues to fill a unique theatre and arts education role in the city, state and greater metropolitan region.

The Playhouse has been well represented by numerous productions both on and off-Broadway. In 2018, George Street Playhouse was represented on Broadway with Gettin’ the Band Back Together which premiered on the Playhouse mainstage in 2013.  American Son, produced by George Street Playhouse in 2017, opened on Broadway in 2018 starring Kerry Washington and Stephen Pasquale, and will appear on Netflix.  Other productions include the Outer Critics’ Circle Best Musical Award-winner The Toxic Avenger.  In 2015, It Shoulda Been You opened on Broadway and Joe DiPietro’s Clever Little Lies opened off-Broadway.  Both shows received their premieres at the Playhouse. Others include the Outer Critics Circle, Drama Desk and Drama League nominated production of The Spitfire Grill; and the Broadway hit and Tony and Pulitzer Prize winning play Proof by David Auburn, which was developed at the Playhouse during the 1999 Next Stage Series of new plays.

Inspired by the platforms of Arts EDNJ and New Jersey Department of Education's 2020 Visual and Performing Arts Learning standards and research on culturally responsive learning, George Street Playhouse has reimagined and designed new educational programs beginning in the 22-23 Season.  Programs will set priority on teacher professional development and student learning experience and align academic work with theatre arts teaching methods. The programs will emphasize social and emotional learning competencies and prioritize the importance of equity, diversity and inclusion.

George Street Playhouse programming is made possible in part by funds from the New Jersey State Council on the Arts/Department of State, a partner agency of the National Endowment for the Arts.  Grant funding has been provided by the Middlesex County Board of County Commissioners through a grant award from the Middlesex County Cultural and Arts Trust Fund.