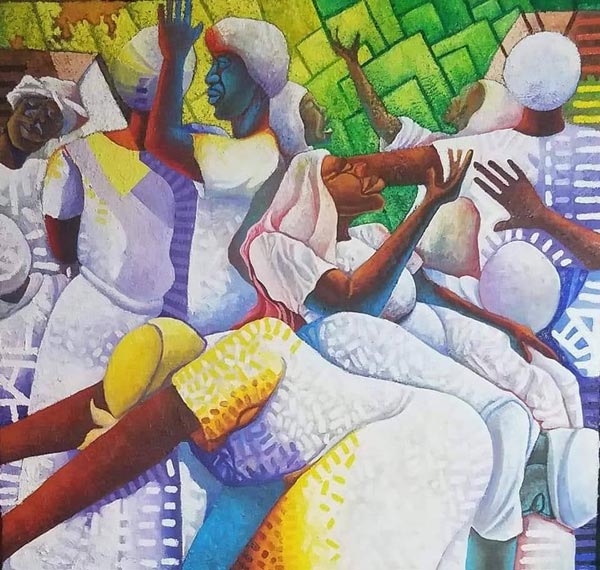 (NEWARK, NJ) -- Akwaaba Gallery in Newark presents “Color and Identity,’’ Stanwyck Cromwell’s collection of paintings and mixed media work, which explore the pleasures and perception of color and reflect Cromwell’s memories of his childhood in Guyana. The show will run from June 25 through July 23.

Cromwell, who is based in Bloomfield, Connecticut, creates work that is often dreamlike and playful,  incorporating elements of expressionism, surrealism and cubism. His paintings include images of spiritual celebrations in his homeland of Guyana, along with symbols, folkloric elements and multi-colored abstract portraits featuring faces of the African diaspora.

“Wide noses and thick lips are frequent in most of my work. I use these features not as cultural stereotypes, but to emphasize the natural beauty of African features,’’ said Cromwell. “I find them sculpturally strong, ruggedly handsome and spiritually connected to my work.” 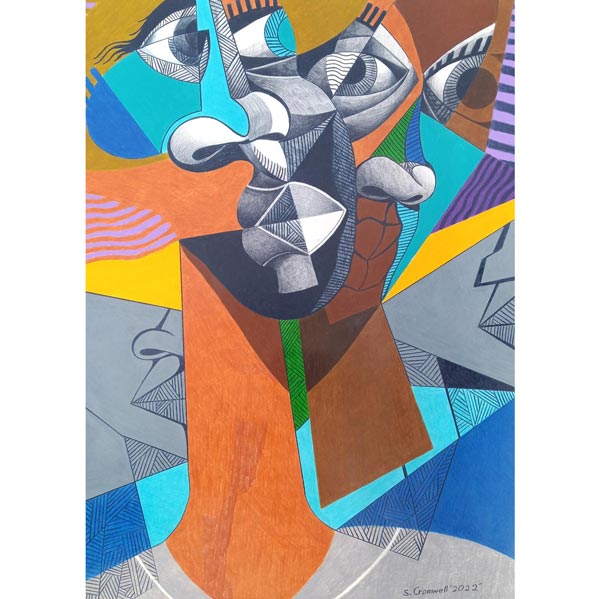 The pieces in “Color and Identity” represent the way color can be used to express mood, represent the natural world, culture, gender and race, said Cromwell.

“I grew up in a country where color is used to identify people,” he explained. “They might not know who Tracy is, but they would say, ‘she’s the red-skinned girl who lives in a blue house and her father drives a red car.’’

As a Black man in the U.S., Cromwell’s identity is inseparable from his color.

Cromwell immigrated to the US as a young adult in 1970 and lived in Brooklyn before moving to Connecticut. A second-generation artist, he has an MFA from the University of Hartford and has been an artist-in-residence at the University of Connecticut, in addition to serving as an adjunct professor at Capital Community College in Hartford.

Much of Cromwell’s work is inspired by the multi-cultural people and history of his native land. “Guyana is in South America, but we’re the only English-speaking country there. We’re categorized as West Indians because of past colonial ties to British colonialism. You have a potpourri of religion and cultures mixed together. There are different spiritual practices and beliefs, including some that have their roots in Africa.’’ 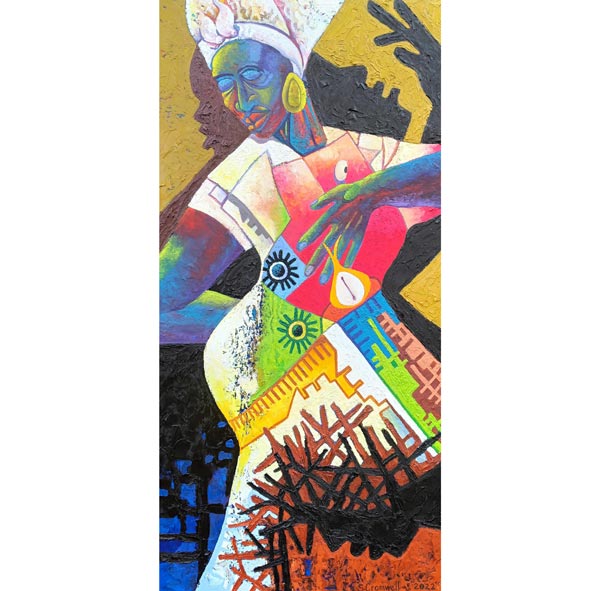 Other pieces reflect his identity as an American and the ways in which African culture is a defining presence in countries where Black people are the minority.

“I often use images of black-eyed peas in my work, it’s like a calling card. Black-eyed peas are popular in every country Black people have inhabited and it has duel meaning to me,’’ said Cromwell. “It reminds me of the racial make-up of America in terms of minority and majority -- we as Black people, we were surrounded by a race considered a majority. But if you remove the nucleus, the Black eye, it loses its identity. It’s what gives the pea it’s beauty.’’

Akwaaba Gallery is located at 509 S. Orange Avenue in Newark, New Jersey. The gallery will host a June 25 opening for “Color and Identity’’ from 5:00pm to 9:00pm.