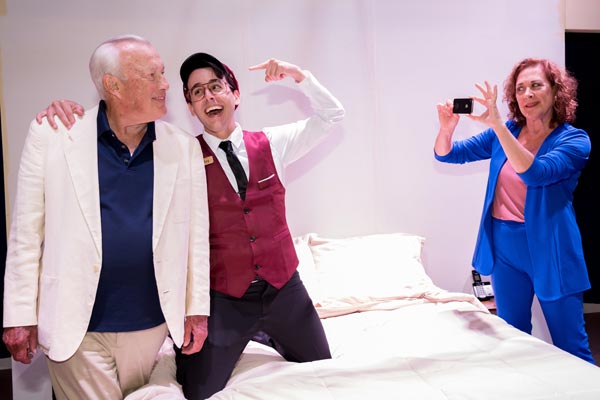 (CAPE MAY, NJ) -- America’s Sexiest Couple the second play of Cape May Stage’s 2022 season, runs Tuesday to Sunday evenings from July 14 until August 14. The laugh-out-loud comedy is the work of Ken Levine, the three-time Emmy Award–winning writer who has been honored for his work on classic comedies such as “Everybody Loves Raymond,” “The Simpsons,” “Cheers,” and more. Levine brings his surefire one-liners and eye for comedic plotting to America’s Sexiest Couple, a raucous new play which Cape May Stage is honored to premiere.

Of the play, Cape May Stage’s Producing Artistic Director Roy Steinberg comments: “Romance and comedy are the main ingredients in Ken Levine’s America’s Sexiest Couple — mixed with some very current issues to create a perfect night of theater.”

Tony Award–winner Karen Ziemba and her real-life husband, actor Bill Tatum, will star in the roles of Susan and Craig, with actor and stand-up comedian Remy Germinario in a supporting role.

General Admission tickets are available for $45. The show officially opens on July 14, 2022 at 8:00pm, following a Preview Night on July 13. The show runs Tuesday to Sunday evenings until August 14. To find more information or to purchase tickets, visit www.capemaystage.org or call the box office at (609) 770-8311.