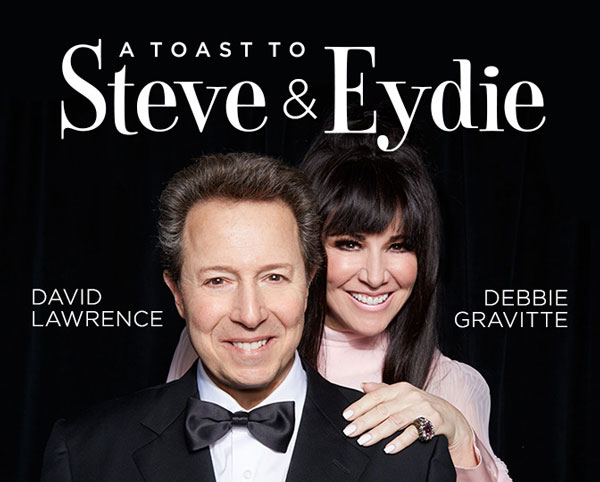 (OCEAN TOWNSHIP, NJ) -- Axelrod Performing Arts Center presents A Toast to Steve & Eydie, featuring one of Broadway’s favorite leading ladies, Tony Award winner Debbie Gravitte alongside David Lawrence, the son of Steve Lawrence and Eydie Gormé, two of the music industry’s most celebrated recording artists and performers.  A Toast to Steve & Eydie takes place on Saturday, May 21 at 8:00pm and Sunday, May 22 at 3:00pm at the Vogel Auditorium at the Axelrod Performing Arts Center. Music director Russ Kassoff will be conducting a 20-piece swing band live on stage for this elegant tribute to the First Couple of Entertainment.

For this East Coast premiere of the new show, Lawrence says, “I am so honored to be continuing the legacy of my mother and father and their music. I am equally honored to share the stage with my friend Debbie Gravitte. The show we’ve put together embodies all their craft, their humor and their elegance.”

David Lawrence is an Emmy-nominated composer, songwriter and producer, known for scores such as the High School Musical trilogy, Disney’s Descendants and the American Pie franchise, among many others.

Steve and Eydie’s careers spanned over five decades and included television, Las Vegas and Broadway. The Grammy and Emmy-winning artists are remembered for such hits as: “We Got Us,” “I’ve Got to Be Me,” “This Could Be the Start of Something Big” “The Ballad of the Sad Young Men,” “Too Close for Comfort,” “Blame it on the Bossa Nova” and “If He Walked into My Life” (from Jerry Herman’s musical Mame).

In 1990, Steve Lawrence and Eydie Gormé toured the world with Frank Sinatra for his Diamond Jubilee World Tour. Sinatra said, “Steve and Eydie represent all that is good about performers and the interpretation of a song...they’re the best.”

Tickets for A Toast to Steve & Eydie are available at www.axelrodartscenter.com or by calling the box office at 732-531-9106, ext. 14. Group discounts available for parties of 10 or more.  Visit the website to review the theater’s current COVID policy.