Luna Stage presents "The Giant Void In My Soul" 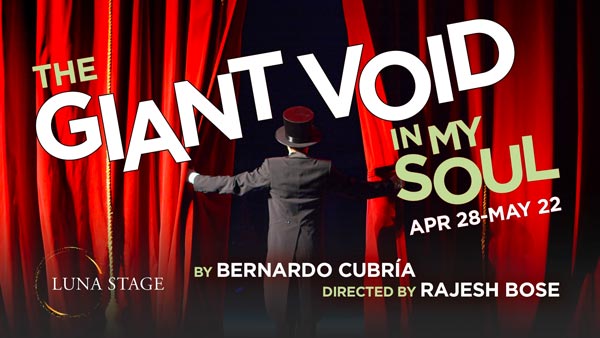 (WEST ORANGE, NJ) -- Luna Stage will reopen its MainStage with Bernardo Cubría’s comedy The Giant Void In My Soul, directed by Rajesh Bose and starring Jesse Castellanos, Darin F. Earl II, John P. Keller and Valerie Terranova. The production will run April 28-May 22. Inspired by Don Quixote and Waiting for Godot, with a good dose of Abbott and Costello thrown in for good measure, The Giant Void In My Soul invites audiences to celebrate the return of live theatre with an existential adventure.

According to the theatre’s website, “When Fool 1 discovers the Giant Void in their soul, they and their loyal best friend Fool 2 set out on a Quixotic quest to fill it. The Giant Void In My Soul is an existential adventure that explores how the joy is found in the journey.”

Although the play was written prior to the pandemic, “It is the perfect response to the ambivalence so many of us are feeling in this moment,” said Luna’s Artistic Director Ari Laura Kreith. “We want to embrace the joy of human connection, but these past two years have been so painful and complicated. How do we return to the world perhaps sadder and wiser but also with a sense of joy and hope?”

As part of Luna’s ongoing commitment to equity and access, all tickets for The Giant Void In My Soul are pay-what-you-choose. Performances are Thursdays at 7:30pm, Fridays and Saturdays at 8:00pm, and Sundays at 3:00pm. To ensure actor and audience safety, proof of vaccination is required and medical-grade masks must be worn throughout the building.

Tickets and more information are available at www.lunastage.org/void. 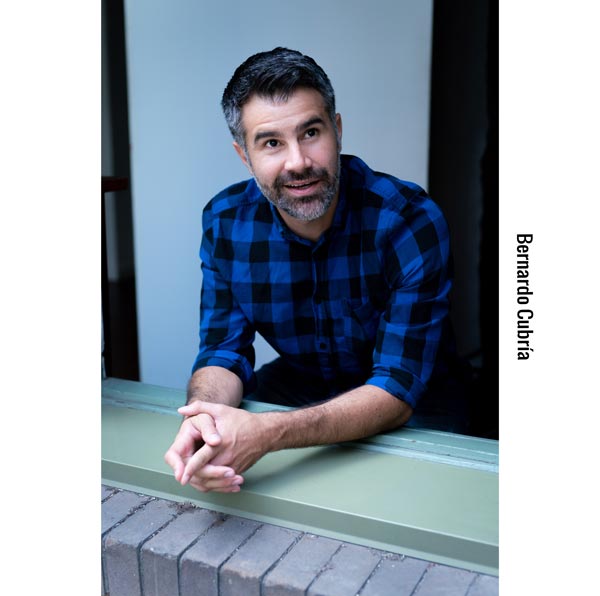 Bernardo Cubría is a Mexican screenwriter/playwright who recently sold his screenplay Like It Used To Be; that will star Gina Rodriguez and Karla Souza. He is also writing the Untitled Ryan Garcia Project that will be directed by Gina Rodriguez and star lightweight boxer Ryan Garcia, it is being produced by Endeavor Content. He was the winner of the NNPN Playwright Award for Political Theatre in 2021. He was also the co-writer of the short film Spanish Class, which won Best Comedy at The NBC Universal Shorts Awards in 2018. His play The Play You Want was awarded the Generation Award by Boulder Ensemble Theatre Company in 2020. The play was also awarded the Ingenio 2020 Award for new play by a Latinx Playwright by The Milagro Theatre in Portland, Oregon. It received its world premiere at The Road Theatre in Los Angeles in 2022. He was also recently nominated for best playwright at The Ovation Awards, Stage Raw Awards, and The Los Angeles Drama Critics Circle Awards for his play The Giant Void In My Soul. The play is receiving its Regional Premiere at Luna Stage in 2022, and its International Premiere at Foro Shakespeare in Mexico City in 2022. The play received a reading at Circle in the Square on Broadway in 2019. His play Neighbors: A Fair Trade Agreement was a Semifinalist for the O'Neill Playwrights Conference in 2016, and was produced Off-Broadway at INTAR in fall of 2017. It has since received a regional premiere at The Studio Theatre in Florida.

Luna Stage develops and produces vibrant plays about local and global experiences. Firmly rooted in New Jersey's Valley Arts District — a crossroads of cultures — Luna brings our communities together for artistic events that spark conversations and create understanding and change.

The recipient of JerseyArts People’s Choice Award for Favorite Small Theatre in NJ in 2019 & 2020, Luna celebrates 10 years in its West Orange location this year. In addition to professional theatre productions on its MainStage and Luna 2, Luna offers classes for children and adults, opportunities for early-career and established theatre artists to develop new work, and pivoted during the pandemic to offer a wide variety of virtual and outdoor programming.

As part of Luna's ongoing commitment to equity and access, all programs including productions, community events, classes and summer camps are Pay-What-You-Choose.