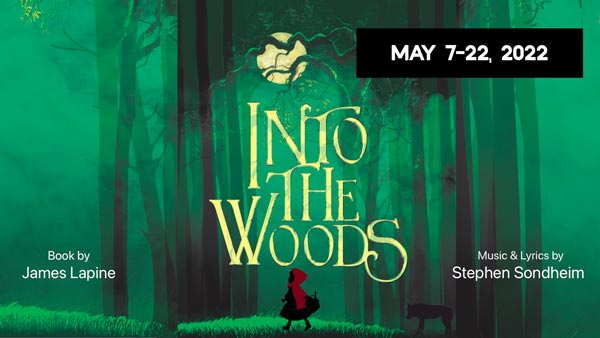 This Tony Award-winning musical follows the classic tales of Little Red Riding Hood, Cinderella, Jack and the Beanstalk, Rapunzel and two princes - all tied together by the baker and his wife, their wish to begin a family and the witch who has put a curse on them. Into The Woods has a book by James Lapine with music and lyrics by Stephen Sondheim.

Tickets range from $25-$42 and may be purchased at www.algonquinarts.org, by calling 732-528-9211 or by visiting the Algonquin Arts Theatre box office on Wednesdays, Thursdays & Fridays, 10AM-3PM located at 60 Abe Voorhees Drive, Manasquan, New Jersey.

The cast for Into The Woods includes:

BRE CADE (The Baker's Wife) is enjoying her fourth trip Into the Woods, having previously played the Witch & Baker’s Wife. She performed in her first musical on this stage 21 years ago. Some favorite roles include: Eva Peron (Evita), Diana (Next to Normal), Sally Bowles (Cabaret), Yitzhak (Hedwig & the Angry Inch).

DAVID FUSCO (The Baker) is excited to be returning to the Algonquin stage after over 2 years! Last seen in Annie (Warbucks), other favorite credits include Beauty & the Beast (Gaston), Evita (Peron), Mamma Mia! (Bill Austin), & The Sound of Music (Captain von Trapp).

JENNIFER NELSON (The Witch) is excited to be back on the Algonquin stage.  Previous roles here include Hattie (Kiss Me, Kate), Mazeppa (Gypsy), Dragon (Shrek).

WILLIE NAESS (Jack) is over the moooooon to be in this production of Into the Woods. Previous Algonquin credits include Godspell, The Buddy Holly Story, and South Pacific.

MAGGIE BLAISE (Little Red) is looking forward to frolicking through the woods while singing, skipping, and scarfing down sweets. She is equally excited to portray these skills on the Algonquin stage! She was recently seen at the Algonquin in Godspell. Other favorite roles include Judy in A Chorus Line, Reno Sweeny in Anything Goes and Janet in The Drowsey Chaperone (Basie award winner).

CASSIDY TERRACCIANO (Rapunzel) is beyond thrilled to be returning to the Algonquin stage! She is an EMC actor and alumni of AMDA in NYC.

JEFF BODNER (The Narrator) is making his Algonquin debut. Professionally, he toured nationally and internationally as Tony in West Side, Danny in Grease, and Che in Evita with Audra McDonald. Most recently he’s played Sam in Mamma Mia and King Triton in The Little Mermaid.

MICHAEL MORCH (Cinderella's Prince) is thrilled to be playing his second Prince in a row at the Algonquin. You may have recently seen him on the Algonquin stage in Amadeus and Cinderella. Previous shows include Starting Here, Starting Now, A Chorus Line, Noises Off, and The Producers.

TYLER CICARDO (Rapunzel's Prince) is excited to be back onstage at the Algonquin. Favorite Algonquin credits: Shrek the Musical (Donkey), Hairspray (Edna Turnblad), The Little Mermaid (Chef Louis), and a teaching artist for the Performing Arts Academy.

KYLE JAVON (The Wolf) studied musical theater at New Jersey City University. A favorite role at NJCU was Voice of Audrey II in Little Shop of Horrors. Kyle has performed at Feinstein’s 54 Below: 54 Sings Memphis (Ensemble) and in summer stock: The Little Mermaid (Sebastian) and Rock of Ages (Mayor/Ja’Keith). Other favorite roles include CATS (Rum Tum Tugger), Rent (Collins), and A Raisin in the Sun (Joseph Asagai).

DOUGLAS MOORE (The Mysterious Man) is also known as Father Christmas, Saint Nicholas, Saint Nick, Kris Kringle, or simply Santa, is a legendary character originating in Western Christian culture who is said to bring children gifts on Christmas Eve of toys and candy or coal or nothing, depending on whether they are "naughty or nice".

AMY CARR SKALECKI (Jack's Mother) is thrilled to be performing alongside such a talented cast—and especially her daughter, Maggie Blaise. Favorite past roles include Reno (Anything Goes) Morales (A Chorus Line) Anita (West Side) Grandma (Addams Family) and Mother Superior (Nunsense).

CHRISTINE DESIMAS (Cinderella's Stepmother) is thrilled to perform in her first Algonquin Arts Theatre production! She was most recently in Xanadu at Playhouse 22 and Shrek with the MAC players.

LINDSEY "LA" MONACO (Lucinda) is happy to be back at AAT for another show! She recently played Deb in Elf the Musical this past December. Some favorite roles include; Reno Sweeney (Anything Goes), Miss Hannigan (Annie), Mrs. Fezziwig (A Christmas Carol), Kitty (Drowsy Chaperone), and Mazeppa (Gypsy).

DANIELLA MACOLINO (Florinda) is making her debut on the Algonquin stage in her dream show! She was last seen as Gingy/Fairy Godmother in the MAC Players production of Shrek the Musical. Daniella developed a passion for acting at a young age and pursues it as a career.

SEAN MCLAUGHLIN (The Steward) is excited to return to the Algonquin stage for the first time in nearly 20 years! He began his acting journey as a member of a youth acting camp many summers ago. Recent local credits include Cornelius Hackl in Hello Dolly!, Chef Louis in The Little Mermaid, and Bob Cratchit in Scrooge.

DAVID FRETZ (Cinderella's Father) is a regular at Algonquin Arts Theatre. Into the Woods was the first show I ever saw on Broadway, and when I went to see it, Stephen Sondheim himself introduced the performance because they were recording it for PBS, and they brought back the original cast to do so. He started my lifelong love of Theatre.

KAITLYN HULME (Sleeping Beauty) is very pleased to be playing a role so true to herself, as sleeping comes so naturally to her that she could do it with her eyes closed.

EMILY DAVIS (Snow White) is elated to be performing again at the Algonquin with such a great cast & crew! She was last seen on this stage as the Pretzel in The Producers! Other favorite roles here include a Jet Girl, a 5 year old's 'favorite fish' in The Little Mermaid, and a dancing citizen of River City in The Music Man 10 years ago.

Algonquin Arts Theatre recently announced an Into the Wood’s Scavenger Hunt throughout the borough of Manasquan, NJ during the month of April. The promotion celebrating the theatre’s musical will incorporate ingredients “The Witch” needs in Into the Woods to make her young again.

Participants who can find: a cow as white as milk, a cape as red as blood, hair as yellow as corn and a slipper as pure as gold will win a myriad of prizes. One lucky participant who completes the challenge will win a prize pack with a value of over $1,000. The four show props can be found in certain businesses throughout Manasquan. Once an item is located, participants need to scan the QR Code attached to that item to get credit for finding the ingredient. The contest will run from April 1 through May 2.

ALGONQUIN ARTS THEATRE (AAT) is a 501c(3) non-profit center for performing arts, providing cultural enrichment and arts education for residents and visitors of Central New Jersey and the Jersey Shore through high quality performances and programs in theatre, music, dance and film.

Located in Manasquan, N.J., AAT is an integral part of the Shore region, offering broad access to arts experiences across multiple disciplines. Deeply committed to education, AAT serves students of all ages not only through art and music instruction, but also through the unique communal conversation that exists between audience member and performer. A journeyman house, AAT features the work of young and emerging artists, designers and directors working alongside seasoned professionals.