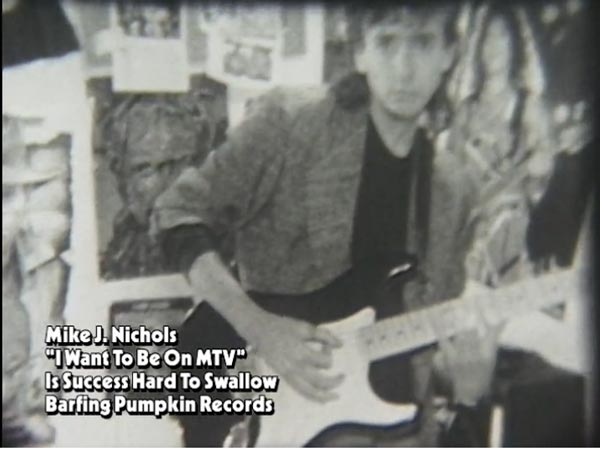 (NEW BRUNSWICK, NJ) -- Like many budding young filmmakers, Mike J. Nichols grew up shooting Super-8 films with his friends.  One of his projects was a music video which forms the premise of World Premiere Video... - a short film that not only includes the music video, but the story behind how he got Dweezil Zappa to be make a cameo, how the film was lost in a fire, and how it somehow re-emerged thirty years later.  The film is part of three to be available for screening virtually during United States Super 8 Film and Digital Video Festival Day 1-Part 2 on Saturday, February 20th.

"I think what brought this together is that I had written a letter to Dweezil Zappa when he was on MTV with some art work and some stories," recalled Nichols.  "About three days later, he called me and we sort of ended up being friends."

Nichols was inspired to learn how to play guitar and began writing songs each weekend.  The first song he ever wrote was called "I Want To Be On MTV" which was really just an excuse to make a music video.  Nichols asked if Dweezil would make a cameo in the video and he said yes. Amazingly, Nichols sent his camera to Dweezil with some storyboards about what to shoot.  The footage was created and sent back to Nichols.

Unfortunately the video was lost when a fire destroyed all of the footage.  But Nichols, who was an editor on last year's Zappa documentary, had some free time during COVID and found an old VHS tape of the Super-8 footage.  He turned the footage into a mini-documentary which tells his story of being interested in filmmaking and music, and attempted to make a music video spoofing MTV favorites like Bon Jovi, Van Halen, and even the New Kids On The Block.  Ultimately he carved out what things would have looked like if Martha Quinn had provided the video's World Premiere on MTV.

It's a very enjoyable short with a music video that will look familiar in design and sound to those who spent long nights watching MTV in the late 80s.  The video will be available on February 20th along with the full-length film, Goodbye Seventies and a very short film called "Can't Answer You Any More (On Faces)."  Click here to rent the films to watch from home.  The cost is $13.25.

Now in its 33rd year, the United States Super 8mm Film & Digital Video Festival is the largest and longest running juried festival of its kind in North America. The festival encourages any genre (including animation, documentary, personal, narrative, and experimental) made on Super 8mm/8mm film, Hi 8mm/8mm, or digital video. We invite you to discover cutting-edge works created by passionate filmmakers with these small-gauge media formats. The 33rd annual United States Super 8mm Film & Digital Video Festival will be held virtually February 20+21, 2021. The Festival will include a different program each evening.