"Who Am I: A Christmas Lullaby" Packs The House at UCPAC Loft Theater
NEWS | FEATURES | PREVIEWS | EVENTS 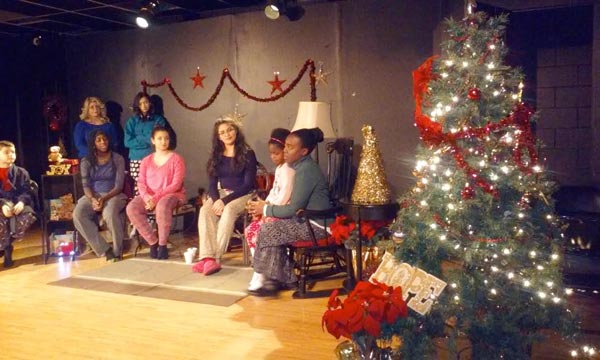 (RAHWAY, NJ) -- From the eyes of a child, the true meaning of Christmas was expressed, in the uplifting original musical “Who Am I: A Christmas Lullaby”. Despite the snow fall that blanketed New Jersey on Saturday December 17, the musical debuted to a full house, at the Union County Performing Arts Center LOFT theater.
Audience members where entertained by a diverse cast of children, portraying a group of vivacious foster care kids; that expressed their ideals of Christmas through dance, song, and poetry.
"I enjoyed this program so much! The talent was unbelievable! Everything was just fine, despite the weather, because those kids brought the sunshine inside," said Bernice Young, of Rahway, New Jersey.
"This was an outstanding production! It deserves to be on a larger stage next year," said Celeste Cafasso, a guest of actress Ruth Rocky, who portrayed the role of Ms. Lillian.
Centered around the character, Abegail Heart, who unexpectedly became a foster child on Christmas Eve, the musical shed light on the realities of life as a foster child. Moments of laughter, singing, and dancing proved that there is always room for hope. The cast of children ranged from age 8 to 16-year's-old and consisted of aspiring performing artists from New Jersey.
"The venue was awesome, the setting was perfect; and most of all, I believe the characters were hand picked from God. From the very beginning, when the character Abegail enters the stage, we felt her hurt, we saw her pain in her eyes.  It was so heart felt, that the person in front of me cried all throughout the performance; and I cried right along with her.  The icing on the cake was when we were serenaded by the cast at the end. AWESOME!  Can't wait for the second season," said Minister Crystal McDaniel, mother of Adora McDaniel who portrayed the role of Abegail Heart.
At the conclusion of the musical, world-renowned opera singer, Darren Stokes, delivered a powerful motivational speech, followed by a stirring vocal performance of "Dream the Impossible Dream". Stokes has performed in the Chicago Opera Theater, the New York City Opera, Carnegie Hall, the Washington National Opera, and the San Francisco Opera; and many more.
"I was encouraged by what these kids did today. To all parents, I want you to know, that it is possible, to be successful as a musician, a poet, a writer. And to continue to encourage your kids in whatever arts they may be in. It does so much for the kids, the community, and their cognitive thinking. I remember what it was like for me; as a kid, seeing my first opera singer. I was so proud to do this for them," said Stokes, who recently returned from performing in Dubai.
A portion of the proceeds from the show will be donated to New Jersey foster care children. Minister Zakkiyah Green, founder/executive director of Beauty In Spirit, Inc.; collaborated with Reynolds-Clarke to identify specific foster care homes in Central New Jersey. The donation will be made along with a special mini-performance of the musical for the foster families.
"The show was inspiring and impactful; and delivered a positive understanding of why Foster care is an important, and selfless act of love, kindness, and compassion to children in need. I'm delighted I could help in giving real foster children hope by identifying homes that have given children the love they need. This donation will be an even bigger blessing to the children," said Minister Green.
A key sponsor of the musical, Vicel Guzman of JAFRA Cosmetics, donated goody bags to each guest, as well as, beauty product giveaways. Guzman will also make holiday gift bags to accompany the donation to the foster care children.
"I participated as a sponsor to this musical, because JAFRA believes that 'love springs out of benevolence'. This production was an amazing opportunity to uplift and encourage children in the arts. As well as, celebrate the holiday season for all. I'm so impressed that real foster children will benefit this holiday from this musical," said Guzman, district manager of JAFRA New Jersey division.
Pictures of the musical can be found on the company's website and facebook page.
Plans are already underway for the 2017 season performance of "Who Am I: A Christmas Lullaby". The organization is actively seeking new aspiring young actors in New Jersey to join the cast. To request more information contact them at: justbeyou.contact@gmail.com.