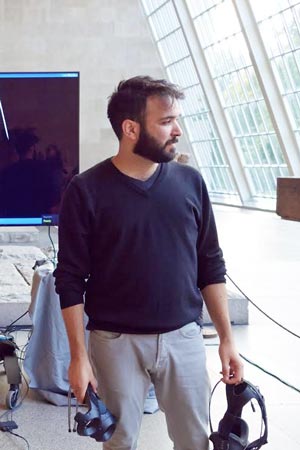 (PRINCETON JUNCTION, NJ) -- Say the word “hacking” and images of compromised international cyber-security may come to mind, however hackers - the term used to describe computer programmers and systems designers, are also motivated to use their skills for good. Locally, the all volunteer group Code for Princeton has organized hack nights, workshops, and talks to provide forums for civic-minded “techies” to engage and innovate in collaborative computer programming using publicly available data to benefit the community. So, what kind of projects could be developed when you add in the creative minds of artists?

That is the over-arching question that the Data and Art Hackathon will explore on October 23rd during the first local event co-hosted with a non-profit arts organization, the West Windsor Arts Council. The day-long event will be held at the West Windsor Arts Center and include the development of civically beneficial projects as well as free workshops on how to make circuits on paper and 3D printing demonstrations. A keynote speaker, researching artist at the Metropolitan Museum of Art's Digital Media Lab, Steven Fragale will speak at 5:00pm on the intersection of technology and art and at the end of the day a distinguished panel of community representatives will review the projects and offer feedback. This event is made possible in part by a sponsorship from PNC Wealth Management.

This summer and fall the West Windsor Arts Council’s programs have been organized to explore a variety of topics related to the growing, national and educational emphasis on STEAM (Science, Technology, Engineering, Arts, and Math) including an exhibition, a play, and classes and camps. “When I heard about Code for Princeton and their Hackathons, I was immediately excited and intrigued by the idea of introducing art into the mix. The visualization of data is a key component for the communication of ideas and problem solving, and this is an area to which artists can contribute significantly.” says West Windsor Arts Council’s Executive Director, Aylin Green. After a few meetings with the folks at Code for Princeton, it was plain that this was an experiment that was intriguing for all. “Code for Princeton essentially is about the community and the coming together of diverse skills, individuals and perspectives. At the art hackathon, where we #hackforart, we will recognize the importance of art in building strong and balanced communities as well as a balance between both left and right sides of the brain.” says Hema Malini Waghray, Director and UX Researcher for Code for Princeton.

The day will include pre-selected projects, each with a coder and an artist team leader. These leaders will discuss their projects in advance in order to set some basic parameters in which to work. Then, during the event, pre-registered and walk-in artists, coders, or enthusiasts of all ages are invited to join them to move the project forward. A few of the projects are ongoing from previous Code for Princeton Hackathons, however new topics have also been proposed.

The projects include: “Water Toxicity” - Create visuals based on water toxicity levels in the VR 360 environment; “Arts in the Everyday” - Using data from "A Survey of Arts in Everyday Life (2002)" examine involvements of individuals in informal art activities like community theatre, church choir, or painting portraits in a home studio; “GIS Self Segregation” - Visualize the self segregation patterns in West Windsor neighborhoods; “Data-Mining from Online Forums” – Using a data crawl on breaking news or twitter news to understand how and by what means news is actually "created"; “Bike Path Visualization” -  Create heat maps for the most user-friendly bike paths for West Windsor; “Uncrash” - Visualize NJDOT road accident and driver data to help uncover patterns of drunk driving, cell phone usage and more; “Greengraph” - Visualize electricity and natural gas usage in the town of Princeton to make information accessible, tangible, and relatable to everyone so they might think about their own personal energy consumption.

For more information about the event including a schedule of events, info about artists, coders, projects and registration, please visit the West Windsor Arts Council’s website at www.westwindsorarts.org.