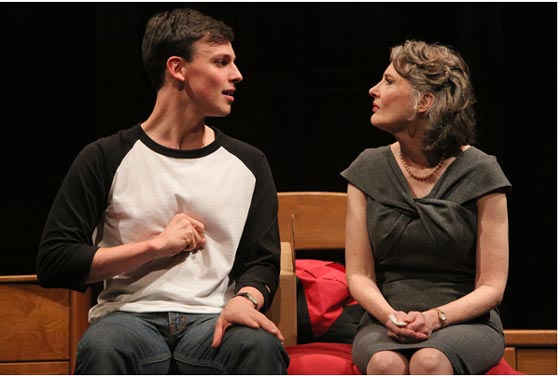 In the late sixties, Laurie Jameson began her work as a college professor at an elite, New England liberal arts college. As the Vietnam War raged on, Jameson was a rebel, fighting the establishment and its traditional views. Well known throughout academia for her work, she's challenged thirty years later by a student that is able make coherent and sometimes brilliant arguments against the values she holds deeply. In short, she has become the establishment and the student, Woodson Bull III, is the new rebel.

In a classic "get off my yard" like senior moment, Jameson strikes back in the only way she knows how — charging Woodson, or "Third" as he is nicknamed, with plagiarism.

That's the basis for "Third", the final play written by the great Wendy Wasserstein who received the Tony Award and Pulitizer Prize for "The Heidi Chronicles" in 1989. Two River Theater Company is presenting "Third" now through June 22 and it is a production not to be missed. Crisply directed by Michael Cumpsty, "Third" is an intellectually stimulating and challenging look at how political views and stereotypes can shape our worlds and our lives. It's also very, very funny.

Annette O'Toole stars as Laurie Jameson, portraying her as a stern but confident college professor. As Woodson Bull III, Christopher Sears shines as her intellectual equal, but one the finds as much goodness in the world as Jameson sees problems. Amy Hohn does a wonderful job as Nancy, a friend and colleague of Laurie's who is battling cancer for the second time. Emily Walton plays Laurie's daughter, an apple that doesn't exactly fall close to the tree. Rounding out the cast is J.R. Horne as Jack Jameson, the lovable father of Laurie whose memory is failing more and more by the day. 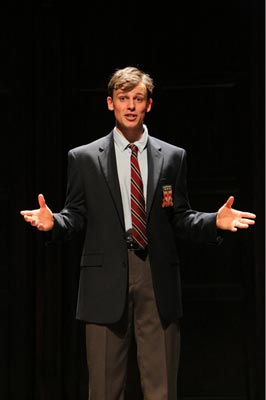 "I want you to speak up, don't be afraid to contradict me or challenge the norms of the dominant culture," says Laurie Jameson on the first day of class and she believes those words; unfortunately, her words ring hollow when she's challenged by Third.

Third wonders why her analysis of "King Lear" is so radically different from what he learned in high school and asks if he can reschedule a mandatory viewing of the film because he will be busy with the wrestling team on the day it is scheduled. She instantly sizes him up as a young Republican from a wealthy family who's a jock — obviously someone who will never see things from her perspective. The problem is that her judgement is wrong on all accounts.

"Are you a Republican?" Jameson asks, treating the word as an admittance of original sin.

"I'm pro choice and I recycle", he replies with a smile.

Regardless, she suggests that he consider transferring because she doesn't believe he will fit in at the school. The truth is that Third purposely chooses challenges for himself. He enjoys putting himself in situations that others cannot understand what he's doing there such as the feminist classes on his class schedule. In fact, it's his love for challenges that led him to take Laurie's class.

Meanwhile, outside the college, the world is following the impending Iraq War vote and Laurie Jameson is obsessed with the possibility of war. She's glued to the news at every opportunity. Nancy's breast cancer has returned, Laurie is beginning to feel hot flashes, her father is losing his mind and disappearing each day, and her marriage is stuck in an image of the past when her husband was a rising star in academia. All of these factors combine to make her refuse to believe that the brilliantly constructed work submitted by Third could actually be his own creation.

She disagrees with the paper, of course, but recognizes its brilliance. She feels threatened by her life's work being challenged by someone she deems inferior. The war, her hot flashes, and Nancy's cancer has Laurie sensing her own mortality. In an effort to take back the world as she knows it (or at least within the safe confines of the college), she accuses Third with plagiarism.

Deep down, I think Laurie knows that she's met her match and simply cannot handle it. Third is challenging the establishment the way Laurie did when she first entered the system. Unfortunately, she has become the system and doesn't have a shred of proof to go along with the plagiarism charge. She also doesn't have a clue as to how her actions will affect his life or her own.

"When someone like me, a Midwesterner, and athlete, on the fence politically, comes looking to you for answers, I am dismissed, even before I ask the goddamn question. And from my point of view, that's how you lost this country," says Third.

The dialogue is wonderful, the pace is perfect, and the acting is superb. This is a very good revival of a play that may resonate even more now in our heated political climate than when it was written. It offers a nice reminder that people are not always who we think they are and dismissing them outright can sometimes lead to our own downfall. 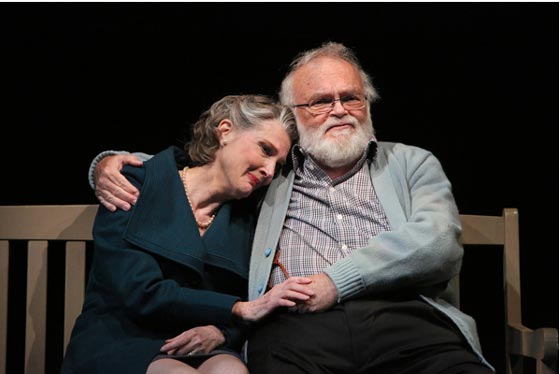 Photos by Michal Daniel
Gary Wien has been covering the arts since 2001 and has had work published with Jersey Arts, Elmore Magazine, Princeton Magazine, Backstreets and other publications. He is a three-time winner of the Asbury Music Award for Top Music Journalist and the author of Beyond the Palace (the first book on the history of rock and roll in Asbury Park) and Are You Listening? The Top 100 Albums of 2001-2010 by New Jersey Artists. In addition, he runs New Jersey Stage and the online radio station The Penguin Rocks. He can be contacted at gary@newjerseystage.com.