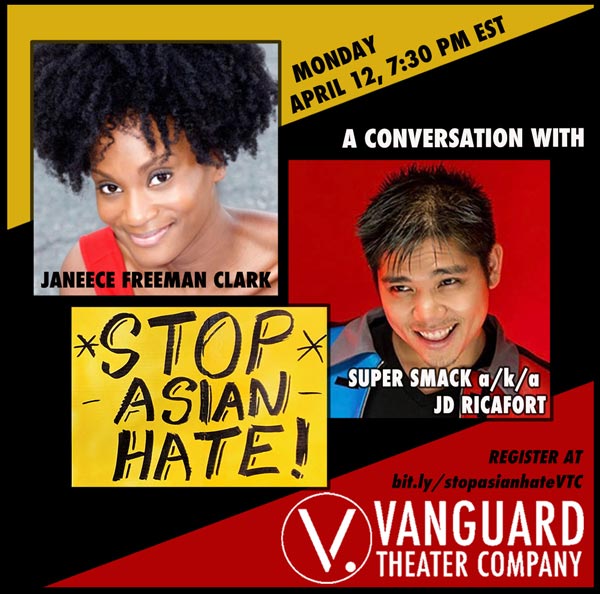 (MONTCLAIR, NJ) -- On Monday, April 12, at 7:30pmEST, Vanguard Theater Company’s Founding Artistic Director Janeece Freeman Clark will speak with rapper and actor Super Smack a/k/a JD Ricafort, to explore the history of Asian Americans and their roles in shaping US identity. The conversation will touch on the rise in anti-Asian hate crimes, the intersection of #StopAsianHate and #BlackLivesMatter, and the role of artists in allyship.

The event is free with a suggested donation to the Immigrant History Initiative. Registration is required at bit.ly/stopasianhateVTC

Janeece Freeman Clark is a Producer, Director, and Educator residing in the NYC region. Under her direction, the New York productions of Everything is Fine Until It’s Not, and A Portrait of Ray, won numerous awards and critical acclaim. Her production of Showtime with Shakespeare premiered at Georgestreet Playhouse and NJPAC, followed by two successful national tours. In 2015, Janeece co-founded Vanguard Theater Company to address the lack of diversity in theater casting and training. There she serves as Artistic Director as well as serving as Adjunct Professor of Theater at Seton Hall University.

Super Smack (JD Ricafort) is a multi-hyphenate pop musician, actor, activist, and government product manager. A proud Asian-American, Smack makes high-energy melodic rap music that uplifts and inspires people with a message of love, representation, and immutable joy. Before developing his career as a recording artist, Smack performed Off-Broadway (#BARS at The Public Theater) as well as in multiple productions of Lin-Manuel Miranda's IN THE HEIGHTS. His dream-come-true role was playing Harold Hill in THE MUSIC MAN at Vanguard Theater Company in 2017, where he returned as a Broadway Buddy Mentor the following year. He's a resident of Queens, New York and loves taking friends to his favorite Filipino restaurants.

Co-founded in 2015 by two Black artists/educators, and with over a 50% BIPOC Board,  Staff, and participants, Vanguard Theater Company is a unique 501(c)(3) committed to changing the narrative through theater dedicated to DREAM: Diversity, Reciprocity, Education, Activism & Mentorship.