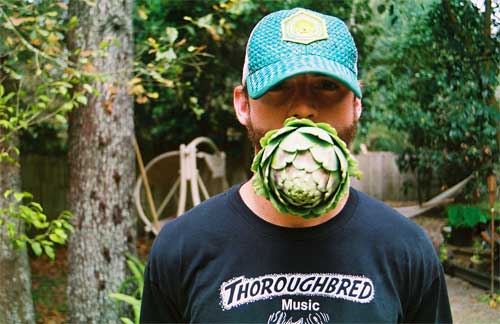 Imagine your band is just about to release their first album on a major record label. You're driving back home to Florida after a successful showcase at New York's legendary C.B.G.B. club when your van has a tire blow out on Inter-state 95 somewhere in Georgia. The next thing you know the van has overturned and you're looking at two of your best friends and your tour manager now dead. It may seem like the script for a movie of the week, but that's what happened to the mid-90s band For Squirrels.

Less than a month before For Squirrels released their debut album, a tragic car accident took the lives of the band's lead singer (Jack Vigliatura), bassist (Bill White), and their tour manager (Tim Bender). Guitarist Travis Tooke and drummer Jack Griego survived with various injuries and kept the band going as the single "Mighty K.C." received solid airplay on modern rock stations across the country. The two went on to form Subrosa, which would release one more album and then fade from memory.

One fan who never forgot about Travis and his former bands was Dave Kosciolek who founded the label Indigo Planet Records several years ago. That label worked with many local and regional artists and is probably best known for releasing the debut record by April Smith. The label had been inactive for well over a year, but after Kosciolek was able to find Travis Tooke he convinced him to have his next record relaunch the record label.

"Speaking both as a fan, and a label, I cannot begin to say how excited I am to be working with Travis," said Kosciolek. "Many people, myself included, have been wondering about Travis the last eight years. I'm happy to say that he has never stopped writing music, and we are anxious for the world to hear it."

There are a lot of reasons why Tooke stopped making music. In addition to losing his friends and having to live through the car accident over and over in his mind, Tooke also became very cynical of the music industry after problems with the record label and his manager led to a lawsuit that wiped out his bank account.

As they approached the band's second record, Tooke changed the band name to Subrosa. The label wanted the band to remain as For Squirrels. When it was clear the band was going to change its name, the label wanted to place stickers on the CDs to tell people that this was the new evolution of For Squirrels, but Tooke didn't agree because he felt the music was headed in a different
direction. This led to friction between the label and the band, which ultimately led to the label dropping Subrosa.

Around this time, Tooke's manager started pushing Travis in ways he didn't like. Eventually, Tooke told him that he no longer wanted to work with him.

"I just wanted to go hibernate and do my own thing and he sued me falsely," said Tooke. "He came over here and garnished $60,000 or something - basically all of the money I had. The courts let him take it away from me because they said I didn't defend myself. At the time, I thought it was just a bunch of nonsense. I was like, he can't just say I owe him money when I don't. I'm not going to even deal with this, which turned out to be the wrong idea. The people I had originally trusted were all turning on me."

The accident took place on September 8, 1995. This time of the year makes the memories a bit stronger and getting back into music will mean having to talk about the accident again. Ironically, that's not really a bad thing for Tooke.

"In some ways it seems like it's rough dealing with it because it doesn't really come up that much," he said. "It seems like the band has kind of faded away in some eyes. I just wish we had gotten more of a chance than we did. I wish those guys had a shot to still be part of it and bring whatever light we could with music."

The release of his upcoming CD, "Artichoke", contains titles like "Lonely and Not Alone", "Would You Burn", "Broken Record" and "Wrongsong" - titles that Travis admits are deeply personal songs. One song called "Two Arm Army" has Travis wondering about his musical future.

"That song came about from the feeling that I really haven't gone anywhere and just because it seems like it's wrong doesn't necessarily make it wrong," he explained. "I was practicing one night and feeling the sort of draining feeling about where have I been? Where am I going? Why is my music still stuck in my room with me?"

His music might have remained hidden if Indigo Planet Records hadn't found him. Tooke is putting his faith into Dave Kosciolek. After being burned in the past, trust wasn't something immediately easy for Tooke, but Kosciolek's passion for the project clearly showed.

"At first I was like are you serious? Why me?" recalled Tooke. "And he was like why not you? He told me how I had inspired him and had this great impact on him with my music. I believed him because I was touched by his honesty and the way he arranged his thoughts were very much like a fan and a music lover. I never thought I could do it on my own again. I never thought that I would be able to get my music out and actually tour and try to get back into it, but he installed new confidence and hope in me again."

"Artichoke" is expected to be released sometime before the end of the year and his next record is already being mastered. There are plans for Travis to do a tour including dates in the New York / New Jersey area. For updates on the CD, go to www.indigoplanetrecords.com