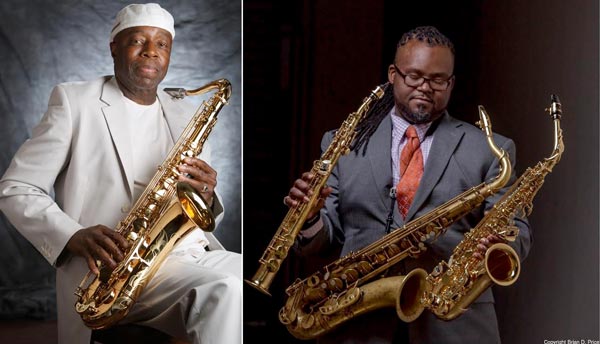 (NEWARK, NJ) -- In tribute to the late Dr. Clement Alexander Price, founder and director of the Rutgers Institute on Ethnicity, Culture, and the Modern Experience, Newark’s city historian, and a devoted fan of jazz, Newark Celebration 350 (NC 350) is launching a new, original jazz concert series, NC 350 Live at Clement’s Place in the heart of Newark’s downtown district. The series, curated by Newark Celebration 350 in partnership with the Institute of Jazz Studies at Rutgers-Newark, features live music performances by local and internationally renowned artists every second Friday of the month commencing August 12th and concluding December 9th. In the spirit of honoring the great jazz tradition of Newark and celebrating the City’s 350th anniversary of its founding, these select performances will be free to the public to enjoy.

The series kicks off August 12th with "The Sax Summit," featuring saxophone and multi-instrumentalist impresarios, Leo Johnson and Anthony Nelson. Johnson is regarded as one of the primary leaders and proponents of Jazz in Newark in the 21st century, performing with the likes of Regina Carter, the O’jays and Faith Evans. Nelson credits Johnson as a strong force in his development and accomplishments as a professional musician and has played with Jimmy McGriff, Chico Mendoza and more.

Located on the first floor of a historic, neo-classical skyscraper that was once the headquarters of American Insurance Co. and the home of Rutgers-Newark’s law school, Clement’s Place, aka “Fifteen Wash,” will be the place to be for jazz music that carries on Clem’s legacy in celebrating Newark as a cultural arts destination.

“We are excited to launch ’NC 350 Live’ with the Institute of Jazz Studies-Rutgers which represents NC 350’s mission to champion the very best of our city’s talented artists and great traditions,” states Junius Williams, NC 350 Chair and Director of the Abbot Leadership Institute. “These programs echo Dr. Clement Price’s vision of celebrating Newark through the arts during this milestone year and we look forward to witnessing some unforgettable jazz performances in the months ahead.”

“Newark has always been the home of jazz—as the headquarters of an internationally renowned jazz radio station WBGO and Rutgers’ Institute of Jazz Studies —and the birthplace of many jazz greats from Sarah Vaughan to our local artists of today who will be gracing our stage each month at Fifteen Wash,” says Wayne Winborne, Executive Director of the Institute of Jazz Studies-Rutgers. “It is our hope that ‘NC 350 Live at Clement’s Place’ will attract not only local residents but jazz lovers from around the world who will discover that Newark is THE place to be for a world class jazz scene.”

The dates and lineup for “NC 350 Live at Clement’s Place" are respectively as follows:

Carrie Jackson and Her Jazzin’ All Stars
September 9, 6-8pm

Native Newarker Carrie Jackson and Her Jazzin’ All Stars brings her signature soulful sound back to her hometown.

Return To the Source reunion with Junius Williams
November 11, 6-8pm

Return to the Source reunites for an unforgettable night of exploring the African-American experience through music. RTS’s repertoire of, blues, rhythm and blues, and jazz, is led by NC 350 ‘s very own Junius Williams and includes some of Newark’s preeminent musicians and artists, such as Anthony Jackson, Janet Van Kline, Wincey Terry, Jeff Motley and Jackie Jones.

About Newark Celebration 350
Newark Celebration 350 (NC 350) is a year-long jubilee of unique events and festivities commemorating the 350th anniversary of the city of Newark’s founding. Over 150 marquee programs will highlight the city’s rich history, remarkable achievements, diverse communities and extraordinary culture presented by a unique coalition of citizens, educational institutions, cultural organizations and community groups. This spectacular “festival of festivals” aims to inspire and excite locals and visitors from around the world by showcasing the best of this great American city. For more information visit www.nc350.org #newark350.

About the Institute of Jazz Studies-Rutgers
The Institute of Jazz Studies is the world's foremost jazz archive and research facility. It was founded in 1952 by Marshall Stearns (1908-1966), a pioneer jazz scholar. In 1966, Rutgers was chosen as the collection's permanent academic home. IJS is part of the Rutgers University Libraries, and in 1994 moved to spacious new quarters on the fourth floor of the John Cotton Dana Library on the Newark Campus. The Institute is used by students from Rutgers (especially those in the new Master's Program in Jazz History and Research) and other institutions, teachers, scholars, authors, independent researchers, musicians, the media, record companies, libraries and other archives, and arts agencies. The Institute of Jazz Studies has been designated as a literary landmark by the New Jersey Center for the Book in the National Registry of the Library of Congress, October 2013.