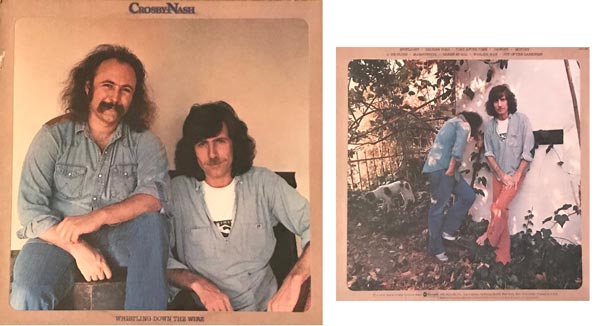 A few years ago, my long-time postal worker retired.  Knowing that I wrote about music and had an online radio station, he surprised me one day by giving me a few hundred albums from his vinyl collection. It was a mix of releases from the late sixties, seventies, and early eighties - generally classic rock and folk music. After Hurricane Sandy he was downsizing and I was one to benefit.

This column is called "The Postal Project" - a live take on each album as I play it for the first time while burning the album to mp3s on my MAC. Nearly all of the artists in the collection are names familiar to me, but many of the albums are long out of print. My goal is to see if I can discover lost tracks - songs that I would have played on the radio if I had been a disc jockey at the time. It's less of being a reviewer and more of being a DJ or a Program Director at a radio station seeking songs for airplay.

Today’s record is “Whistling Down The Wire” by Crosby & Nash. This is a record I’ve never heard of before.  As a fan of Crosby, Stills, Nash & Young, along with their work in The Byrds (David Crosby) & The Hollies (Graham Nash), I was interested to see what they would sound like on this album.

Released in 1976, the needle drops and opens with “Spotlight” - a song by Graham Nash and Danny Kootch, which is very much a seventies tune.  In fact, the bouncy rock song reminds me of something that could have been a theme song for a tv sitcom.  Not the start I was hoping for.  Apparently it was released as a single, but failed to make the charts. "How come you ask me what I'm doing here / With my guitar in hand / I'm at the microphone stand / I think the reason should be very clear / You see the spotlight it's for a good night / Something happens to you / And the same thing happens to me."

The second song, “Broken Bird,” fares much better and is the track that gives the album its name.  The slow, quiet intro sounds nice and the harmonies remind me of something they might have written for CSN.  Both Nash and Graham share songwriting credits on this one. Lyrically, the song reminds me of how CSN songs often were rather simple, but beautiful.  This song is like that as well.  “Sending them back over the lines / Whistling down the wire / From pole to pole / Bending them over the times / Trying to burn the diamonds from the holy coal”

“Time After Time” by David Crosby is the third song; a nice ballad that feels like something I would have played on the radio during rainy Sunday afternoons.  It’s got that kind of vibe.  It’s not great, but definitely not a throw away track either.  Has some nice, sad piano riffs.  "Day after day when I wake up / I look in your eyes / At the smile in your eyes / And time after time / When I look there / We're running in rhyme / In a slow easy climb / Up the road that we'll run together."

The fourth track is a unique take on an instrumental tune.  Entitled, “Dancer,” the song  by David Crosby contains no lyrics but features something akin to scatting - just vocal noises that range from humming to growling spread out throughout the song.  I honestly can’t think of anything to compare it to. I guess that’s a good thing.

The first side closes out with “Mutiny” by Graham Nash.  This is a cool song that reminds me of something Paul McCartney might have written with Wings.  The calm, meandering tune is full of strange imagery, it’s almost as if it was a transcript of a weird dream or LSD trip. It's got some killer guitar licks and has to be the only song I’ve ever heard to include cannibals and monkeys in its lyrics.  I would definitely spin this one on the radio as a deep track and wait for the phones to ring.  “And the cannibals are waiting on the edge to eat the meat that they can smell / And the monkeys standing in line can do the two step very well / On the gang plank at a time a story for the waves to tell / Mutiny / On Sailboat Bay.”

Side two opens with “J. B’s Blues” by Graham Nash.  This is another track that sounds like something CSN might have done.  The lyrics hint that this might be a song about a friend of his.  “Watching over all the years I’ve known you now / You’ve been looking through the glass at shooting stars / And all you ever wanted was for them to see / Who they are, it’s not ‘so far’”

“Marguerita” by Graham Nash follows and is one of my favorites of the album.  It’s a wonderful, mystic-like song about a man and a woman ordering drinks.  This is one I would absolutely play on the radio at night.  “Order me a drink / I’ll have a glass of red wine / If you don’t know what you want / Take your time / She looked at me and ordered a Marguerita / With no salt / In her eyes / She held me and never asked me why” - The song reminds me of a painting that lets you fill in the details.  Are these people lovers? Strangers? Hooking up? This would have been a good deep track on FM radio.

Another song written by Nash and Crosby follows and it’s a terrific one.  “Taken At All” is a song about choices made and opportunities pondered.  “Can you see by your lonely light of day / Is this road really the only way / Can this road be taken, taken at all.”

“Foolish Man” by David Crosby comes up next.  This is a rather interesting track.  I’m not a big fan of it on the record, but I think it could be one of those songs to completely come alive on stage.  If I was an FM DJ at the time, I’d put this one on in the late night shifts after midnight - the period of time where deep, mellow tunes can thrive.  “I keep expecting things that don’t happen / Should but they don’t / Could but they won’t / And I don’t see / No I don’t see / Just don’t understand / I must be such a foolish man.”

The closing track, “Out of the Darkness” might be the album’s best.  This was the first single of the album (one of the few times I think a record company might have gotten things right) and it did crack the Billboard Hot 100, but peaked at 89.  It was written by Nash, Crosby and Craig Degree. The song’s piano opening grabs me from the beginning.  The song kind of reminds me of what I’d imagine a mid 1970s Billy Joel might have done if he was part of a duo. It’s a great way to close this one out. “Be the light or love will fade away / Be the light or love will fade away / Out of the darkness / Suddenly my body can take a breath / I’m coming out of the darkness / Finally my soul can take a rest”

I think any time you have great songwriters you should be able to find a gem or two on any album. This record definitely has some interesting songs.  They don’t reach the level of previous work by these artists, but are songs I’ll play again from time to time. It's all about the journey...