The Life Of Tom Richards To Be Celebrated On Saturday, November 17 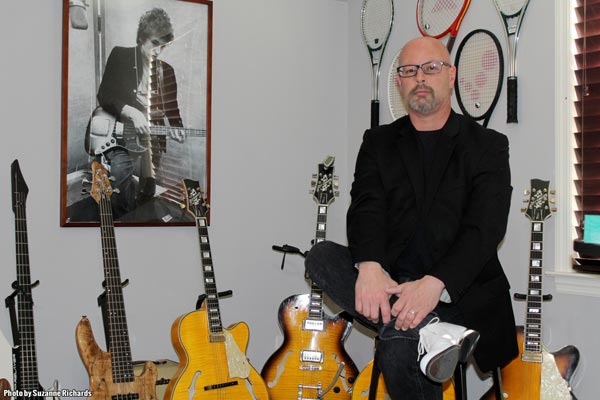 (WALL TOWNSHIP, NJ) -- The cover story of New Jersey Stage magazine Issue 44 was on Tom Richards, a musician born and raised in New Jersey, and his battle with an aggressive and incurable form of cancer.  At the time, Tom believed he had a year or two left and was fighting to complete an album in that time.  Sadly, Tom lost his battle on October 2, 2018.  A  celebration of his life will take place at the O'Brien Funeral Home in Wall Township on Saturday, November 17 from noon to 4:00pm.

A few years ago, Tom Richards and his wife Suzanne had moved to Pulaski, Tennessee to be closer to the Nashville music scene. Tom was a longtime member of the Nashville musicians Association AFM local 257 and he had been getting more work in Nashville than along the Jersey Shore, so the move made sense. Unfortunately, it was not long after the move that he received his diagnosis and his battle began.  A personal friend of New Jersey Stage, we were all deeply saddened by the news of his passing. He fought a good fight and we know he fought until the very end.  The Nashville Musicians Association celebrated his life on October 14th.

Tom was a life long resident of Wall Township, graduating from from Wall High School in 1980 and going on to college at Rutgers University.  He graduated from Rutgers in 1984 with a degree in Ceramic Engineering and worked for the US Army for many years as a Project Manager. His most recent jobs were working with NS Design as their Social Media Director, working with Floyd Rose as their National Sales Director, and as US Sales Director for NBE Corp. with Clover Bass, Esh Bass, Stromberg guitars. Tom's musical career included playing bass with the The Slices, The Baby Seal Club, and many other bands throughout his lifetime.

Tom is survived by his wife Suzanne, daughter Jessica, son David and by five brothers and sisters, Nancy, Stanley, Grace, John, and Judy.

The O'Brien Funeral Home is located at 2028 NJ-35 in Wall Township, New Jersey.