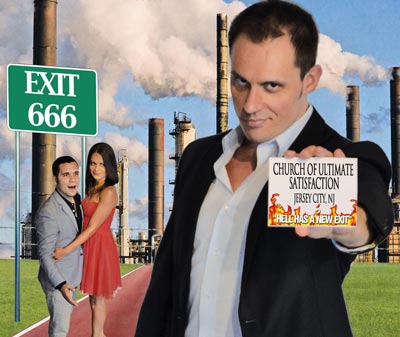 If you’re the type who likes to watch late night comedies on cable television that feature memorable lines that you know by heart, The Jersey Devil is your type of film.  Full of one-liners that poke fun at pop culture, rock and roll, and religion, it tells the tale of a leadership change in hell.  When term limits force Lucifer to hand over the reigns to James Burnett, he expects things to stay as they have been for thousands of years. Needless to say, he was wrong.

James Burnett, his successor, thinks hell needs a new identity along with a new location. After looking at places like Las Vegas (which looks too much like hell - including the heat - for his taste), Georgia (he’s still upset about the last time the Devil went down to Georgia), and Hollywood (says it looks like hell with a conscience), New Jersey makes his short list.  He decides to visit and get a closer look.

“Take a deep breath, what’s that smell like?” he asks his advocate, Richard Cooper, and Tori (the girl Richard is in love with).  “That’s the smell of evil… the Garden State - home of Springsteen and the Prince of Darkness!”

They settle in Jersey City, but find that the locals aren’t interested in selling their souls. In fact, they generally shut their doors before the pitch is even finished.  It’s clear that a completely new identity is needed, one that avoids all mention of hell.  The three come up with the idea to start a new religion based on sex called The Church of Ultimate Satisfaction.

The film became available on Amazon, Best Buy, Barnes & Noble, and several other outlets earlier in the year.  According to Joseph Pepitone (who also served as director), the festival led to a distribution deal but his work still continues.

“Making the film turns out to be the easiest part,” said Pepitone.  “The hardest parts are getting the money upfront and then getting distribution.  I just like making the film. That’s the least stress part of the whole project.  People think once you’ve made a film that now you can just get it out there, but you have to have the means.  You need a company that can get it into places where people can find it.  That’s very tough for indie films.”

Pepitone grew up in Brooklyn, but has spent the last 20 years or so in New Jersey so choosing that as the setting was a natural fit.  And as someone who grew up in Catholic schools from elementary to college, the religious aspect was second nature to him.  He admits he likes to stir things up a bit and knows that religion has a tendency to do that.  Not only does the film involve the battle between good and evil, but Lucifer is married to Eve and his advocate is Judas.  Even God himself makes an appearance and his character is a bit different then you probably would expect.

“To get people to laugh and to have some people agitated would be the goal,” he said.  “A lot of the humor comes from simply knowing that stuff. The religion (Church of Ultimate Satisfaction) was just made up.  The idea came mostly from being around religion my whole life and knowing that if you actually step back and look at things you can easily say, ‘Well, this doesn’t make sense’ or ‘That sounds like someone made it up.’  We were trying to find something people like and make a religion out of it, and see who would follow it.”

As with most indie films, The Jersey Devil had a small budget.  They were fortunate to get a couple of producers from Jersey City (where the entire film was shot) on board that helped bring in additional people.  If money wasn’t an object, Pepitone said he would have been able to spread out the shooting more.  As it was, the entire film was shot in less than a month.  During that period of time they were hit with two blizzards in one week.  Ironically, the shots with snow on the ground actually worked for the story because one of the reasons the new devil wanted to move was to be able to experience a change of seasons.

The film is full of lines that will hit home with the Jersey audience from Shore traffic and E-Z Pass problems to jokes about Steinbrenner, Springsteen, and Sinatra.  There are tons of one-liners for fans of classic rock as well. 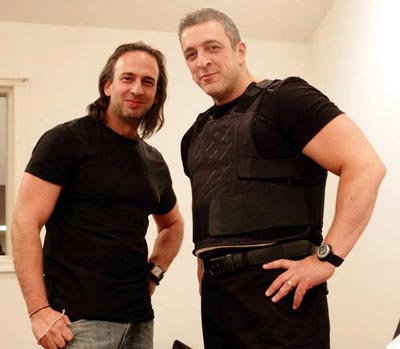 “A lot of the references are just stuff I talk about with my friends and with my brother who wrote the script with me,” added Pepitone.  “But it’s just stuff we find funny.  I like hearing those lines where you’re like, ‘That’s funny.  That would be funny in every day conversation.’ And that’s where the writing of those one-liners come from.  This is something people would say to each other and it would get a laugh from me and my friends.”

So, if you’ve ever been frustrated with life in the Garden State and think any place has got to be better than here, this film will prove otherwise. Things may get bad here, but not eternal damnation bad. But considering we have casinos, strip clubs, and organized crime, maybe we’ve been living in hell all along.