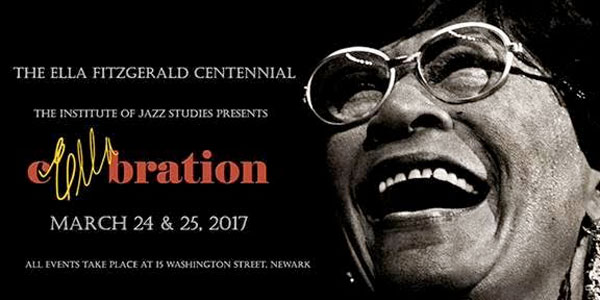 (NEWARK, NJ) -- Ella! Few figures in the world of entertainment reach a level of fame where their first names alone spark joy and recognition even among those unfamiliar with their work. Ella Fitzgerald is among that rarified few.

But even serious Ella fans might not know that 2017 marks the centennial of the birth of the jazz singer acclaimed as the International First Lady of Song for an incredible career that lasted nearly 60 years and touched so many lives.

From March 24-25 the Institute of Jazz Studies (IJS) at Rutgers University will present CELLABRATION, a two-day FREE symposium of panels, films, music and more to celebrate the most influential vocalist in jazz history. The event will bring together musicians, historians, authors, record producers, critics and fans to honor Ella and her lasting impact. Symposium partners include Rutgers University Libraries; Office of the Chancellor, Rutgers University-Newark; the Ella Fitzgerald Charitable Foundation, which provided grant support; and WBGO FM, the nation’s foremost jazz radio station.

Speakers and topics include:

Performances by artists inspired by Ella will close each day at Clement’s Place, Rutgers-Newark’s own jazz performance space.

Everything takes place at 15 Washington St., Newark, New Jersey (short walk from the Newark Museum and the Newark Library).