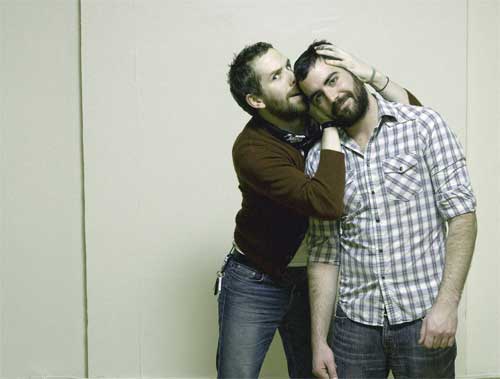 The Gay Blades, based in Jersey City, released Ghosts last month. Upstage Magazine takes you inside one of the state's best indie music bands. The band consists of Puppy Mills (aka The Snitch) and Clark Westfield (aka The Aristocrat of Crime). Last year they were nominated for 4 Asbury Park Music Awards including Top Male Vocalist, Top Live Performance, Top Indie Band, and Top Drummer. We were able to interview them via email shortly before the record officially was released.

Ok, we'll start with an easy and obvious one... Tell me about the band's name. How did that come about and what is the story between Hello Lovely and The Gay Blades?
The Gay Blades got their name in the usual way. We climbed up a mountain, and after many days of fasting and talking to burning shrubbery, we descended from the mountain, band name in hand. And yes, it was written on stone.. in diamonds.

Regarding the Hello Lovely, that was a former project of ours. While performing with HL, we started to hear from people about a band called "The Gay Blades" that was talking all sorts of junk about us everywhere; online, at shows, and even at the Subway Restaurant where they worked! So just as any pacifist would do, we came right back at them with the most caustic, offensive things we could dig up on them, which wasn't very hard. As fate would have it, both bands wound up at the same bar one night and a traditional east-coast rival stand-off began. After many bloody rounds of that game where you throw knives at the other person's feet without hitting them, a draw was called when it was realized that both sides were just throwing the knives right into the other's feet, ignoring the rules. Drinks were shared, bread was broken and the past indiscretions were buried. Each band agreed to take up the cause of keeping the music of the other band alive if one were to perish. Of course, The Gay Blades died in a fiery car crash that evening. At that moment, Clark Westfield and Puppy Mills adopted their fallen brothers names as aka's and became The Gay Blades ( R.I.P.). The R.I.P. portion of the band name is not printed today, but is implied every time.

What's the deal with only having two in the band? What do you have against bass players?
Of course we love bass players. It shows in our misprinted BUCK FASS pins, which were supposted to read "BUCK FASSTER BY PLAYING BASS" meaning, 'if you really want to make money in the music world, you gotta play bass, because that's the moneymaker'. We are often misunderstood.

What is trash pop and did the Gay Blades invent it? If not, who did?? It sounds better than "anxious spazz pop" like someone once wrote about the band.
"Trash Pop" is known as such because it's "sonically terrible" and yet still palatable to the ears. And of course we invented it, just like we invented sand, those pictures that are made up of a bunch of smaller pictures, and that thing where you are walking and someone is walking toward you, and you both go to step out of the way, but wind up stepping back in each others' way over and over again.

What's the strangest thing someone has ever said about your music? Was there ever a description that just made you laugh out loud?
We were once told that we were "nothing special." Tell us something, would you describe two guys who get on stage and perform an engaging live set while at the same time doing their taxes and shooting fireballs out of their eyes at all the bloggers in the crowd as "nothing special"? You would think not... So yes, we laughed out loud - right before we put the guy in a cab and gave the driver a 50 spot and told him to drive into the East River.

SXSW (South by Southwest Music Festival) - You guys were all over the place and judging from the blogs I've seen you really picked up a lot of fans that week. What was it like being thrown in front of nearly every music writer in the world and in front of crowds who probably never heard of the band?
Well firstly, no one has never heard of The Gay Blades, they only don't know they have. Like when you're driving and you're thinking about something and then you realize you don't remember driving for the last 5 minutes.. We're the roller skating rink and burned out Dunkin' Donuts you don't remember driving past. Second, it was the most natural thing ever. It's like being two fish that have spent their whole lives in the same fishbowl, and then all of a sudden, they're transplanted into a fishbowl full of gasoline, and they turn into magical golden fish. Down in Texas, we WERE those magical golden fish, and nothing else has ever felt so natural to us. Except for beating up weight-lifter guys and ice-cream men.

One thing that people seem to always talk about when they review your shows is how there's no separation between the band and the audience. From the stories and jokes told on stage to simply the interaction, it seems like you bridge the gap more than most bands. People only need to check out one of your youtube vids to see that. Is that something you really try to do?
To be honest, we don't really try to do anything other than have fun. If people in the audience wind up being assimilated into the experience that is The Gay Blades, and then they have a heart attack because their body can't handle the sheer euphoria the experience produces, we are not responsible for their medical bills. You know?

Tell me about the new record. It sounds pretty radio friendly, are you guys going to do a radio campaign to get on college stations or anything?
TGB is already being played on 103.9 "The Edge", an alternative music station based in Phoenix, AZ, who had the foresight to play TGB tunes before they are played everywhere else. As a result of that, we receive many myspace friend requests and bomb threats from the Phoenix area every day!! Also, we have a very strong DIY radio promotion compaign focusing on both college stations and all those other stations that play the songs that your mom listens to at work all day long.

Finally, If you've ever Googled "Gay Blades" (and I'm betting you have) you've probably come across some pretty interesting results. What's the weirdest thing you've seen?
The weirdest thing we've seen is the fact that we aren't the only search results that come back. Granted, there are many pages on the internet that contain the words "The" "Gay" and "Blades", but wouldn't you think that Google would realize that the relevance of any page, when compared to any TGB related page or article, would decrease to zero? You would think so...

Actually there are some rather interesting results... You should check them out !

For more information on The Gay Blades visit
http://www.thegayblades.com
http://www.myspace.com/gayblades