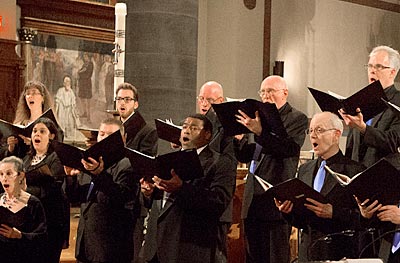 The Ember Ensemble of Schola Cantorum on Hudson is not your usual choir.  This eclectic group does not shy from tackling important issues of the day with their programs. In previous seasons, they have examined themes as diverse as energy and the environment to immigration.  This year’s theme focuses on military conflicts and the aftermath of such conflicts.  The season begins on Sunday, November 12 in Montclair when the Ember Ensemble presents the East Coast Premiere of a dramatic oratorio by John Muehleisen called “But Who Shall Return Us Our Children? A Kipling Passion.”

This piece tells the story of Rudyard Kipling and his wife as his son, John, goes off to World War I and is killed.  The tragedy is compounded by the fact that his son was originally denied acceptance into the military due to poor eyesight, but ultimately was able to fight after his father pulled some strings. It was a decision that would haunt Kipling for the rest of his life.

At the time of World War I, Rudyard Kipling was arguably the most popular poet in England.  History remembers him best as the author of “The Jungle Book” but he was a journalist, poet, novelist, and Nobel Prize winner as well.  He was also very much a big supporter of England’s role in World War I – so much so that his career later suffered from his war-time fever.  This was a period of time in which war was still thought of as something grand – an event seen as a crucial step in the lives of boys on their way to becoming men.  England, along with the rest of the world and Kipling himself, would soon learn the horrors of war in ways they never imagined thanks to the evolution of modern warfare.

John Kipling was killed at the Battle of Loos, but his body was never found.  The fascinating story of the Kiplings and the sacrifice made by soldiers – and their families – is revealed in “But Who Shall Return Us Our Children?”  The piece is scored for soprano, tenor, and bass soloists with a choir and chamber orchestra.  It made its World Premiere at the World War I Museum in Kansas last April, but one movement in the Ember Ensemble concert will be heard the very first time.  The Ember Ensemble is unique in that the company often performs works by living composers and they seek to create music that has the power to affect the human heart and soul.  The Kipling Passion does just that.

“There’s not much known about a lot of the young people who lost their lives,” said Deborah Simpkin King, PhD, Artistic Director and Founder of Schola Cantorum on Hudson.  “Not only in this conflict, but in every conflict that we engage.  It’s a large human issue that I think warrants a real focus.”

The Ember Ensemble will provide that focus throughout the entire season entitled “When The War Is Over.”  The season begins with “But Who Shall Return Us Our Children?” and continues with “Where Poppies Grow” a concert in March that deals with the music and poetry from all of the nations involved in World War I.  The series concludes in May with “Safe For Democracy” – a performance that turns the spotlight on the disenfranchised soldier.

“But Who Shall Return Us Our Children?” takes place in six parts.  The first part is when John Kiplinger was born.  In the second, war is being discussed and Rudyard is playing a role in trying to convince the public that war is inevitable.  We then move on to the battlefield itself in the third part, in which John Kipling goes missing.  Rudyard and his wife begin the search for their son in the fourth part and they receive confirmation that their son is dead in the next part.  The final part of the oratorio examines how families and nations deal with the loss of their soldiers.

“In part 6, John Muehleisen, the composer, circles around to the question of how do we deal with this as a human species?” said King  “The enormous loss on an individual basis within families: how do we as a country deal with knowing that we send our young people off to war; and how do we deal with it politically?”

All of the words spoken and sung throughout the performance come from actual history.  Muehleisen used the diaries of Rudyard and his wife; letters to home written by John Kipling; and poetry from the World War I period.  He even included a Carl Sandburg poem about a war from a different era because its message rings true here as well.

In honor of the season’s theme, the choir will perform the entire season dressed in black with a red poppy on their label.  This is a stark difference from the group’s normal variety of colors and clothes, but it is just one in a serious of decisions to pay tribute to the fallen soldiers.  Veterans will be recognized at every performance and  the entire season leads up to “Listen To Our Stories” in November 2018.  That event is tied to both the centennial of the Armistice and the ensemble’s 2018 season entitled “Coming of Age” which focuses on the issue of aging.  The Ember Ensemble will tie stories of veterans in their later years into concerts for next season.

“We’re trying to focus on things we believe we need to be thinking about as a society and that maybe we need to think about a little differently,” added King.  “We never try to expouse a viewpoint – we stay away from that – but try to bring attention to things that maybe haven’t been considered.   We’re not just saying ‘I believe we went into this conflict because of these reasons and therefore it was justified or therefore it wasn’t.  We want to bypass all of that and get to the guts of the human impact.  That’s where I believe the arts can have a powerful impact in the world and that’s why I do what I do with my life.”

King continued, “It’s a very different organization in that we don’t sing pieces for our own gratification, although it always enhances our lives.  We sing because we believe there is a message that is needed.  It’s a group that very much believes in the power of music (and specifically singing) to move hearts and souls.  When you come to an Ember Ensemble concert expect the unexpected… you will not be disappointed.”

“But Who Shall Return Us Our Children? A Kipling Passion”

Church of the Immaculate Conception