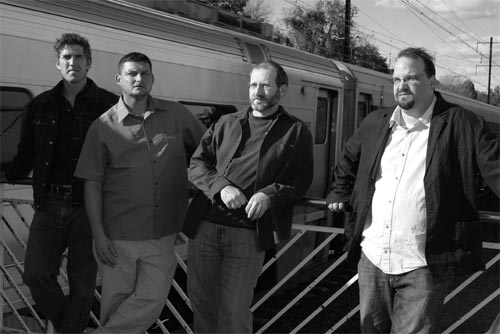 Some bands never make it out of the garage while others last a lifetime. Thanks to recordings, fans never really have to say goodbye but the musicians almost always are faced with the difficult decision of moving on or becoming stagnant. For The Commons, they decided they'd rather make the decision to move on rather than wait a year too long.

Led by Keith Monacchio, one of the best songwriters in the state, they've been a fixture on the Trenton scene for nearly a decade. The band made the decision to record one final record and do one final tour before going their separate ways. That record is called American Ghost. It will be officially released on August 17th with a CD Release party at The Saint in Asbury Park, New Jersey. This will not only be the band's last CD, but it just might be their best release to date.

Monacchio describes American Ghost as a story or character driven record. This is a far different theme than the band's last CD, Dirt Waffle (which was a pop record) and the previous one before that, Come On Get Gone (which was a deeply personal record dealing with a troubled relationship).

"I think I kind of got tired of writing about myself," explained Keith Monachio. "There's only so much personal stuff you can lay on people. After a while it's like 'I'm tired of listening to this guy talk about his problems.' So I started writing these story songs. I got into it a little on Come On Get Gone with "Jesus Had A Brother". I said I would love to make a record of just all character driven stories. So I started these little writing exercises where I would write down titles or do little character sketches about what I wanted the characters to be and started writing around that. I almost put myself in a box, which is a weird place to be but it gives you structure to do some different things.

"I was living above this barber shop in Hamilton where there's two bars on each corner and at night people would always be coming and going out of the bars. I would just sit on the porch like a fly on the wall and watch the people and develop stories out of that. A lot of the stories came that way. Obviously there are little references to myself in the songs or through the characters, but I hadn't heard a good story record or a character driven record in a long time and I wanted to do that."

Between the four guys in the band (Sean Glonek, Tom Kale, Tom McDonald, and Keith), The Commons have been through a lot in the past 9 years. According to Monacchio, it's been a good run for the band. They're all still great friends, it's just time to move on. They've survived one marriage, have one marriage pending, had one broken engagement, and one divorce. Somehow, through it all the band has remained a constant in their lives, but each year makes it a little bit harder to keep going. The guys now have jobs, families, even mortages to worry about. Things like that make setting up tour schedules a little more complicated.

"I don't know if it's really the end of anything," said Monacchio. "Who knows? In a couple of years, I might say let's make another record, but for now - for me as an artist, it's a little easier for me to go at things on my own and not have to juggle everybody's schedule. When you think about it you're not really just juggling four people's schedule, you're in essence juggling eight people's schedules because you have wives and girlfriends and things like that to worry about."

Earlier this year, Monacchio booked a solo tour of 8 shows in 10 days down south. He's always done solo performances in addition to band shows, but the solo shows have been coming more frequently in recent years and now take on a greater meaning - especially since he's played with some of his bandmates for nearly half of his life.

"I've been playing with Tommy McDonald for 16 years," said Monacchio. "It's gotten to the point where I'll bring in a song and I'll be like the part goes like this and then he's like 'oh yeah, and then it does this, this, and this.' So he just knows my changes and where things are going to go. That's not a bad thing, but it's not a great thing either because it's almost to be expected. It means there aren't any curve balls anymore. People know what's coming and maybe it's not as challenging as it was before."

The challenge of keeping things fresh for American Ghost was aided by Sean Glonek, who produced this record as well as the last three by the band. Monacchio said Sean pushed the band harder on this record than ever before and they brought in instruments like violin and saxophone for the first time. The additional instruments give an added layer - an almost Beatlesque flavor - to the songs.

The guys in the band all used to kid that things were going to happen just when the band was about to break up. Ironically, that's pretty much the way the story went. Their last record had songs picked up by MTV for the show "8th & Ocean" and TV Land just picked up a song from Dirt Waffle for the season finale of "High School Reunion".

If nothing else, it's nice to see people appreciate the work of a bunch of hard-working from a city where it isn't easy to be a rock musician. It's nice to see that good lyrics and good songwriting eventually does get noticed. It's a shame that it had to take so long before people starting paying attention, but it's better late than never. The band is ready to take their final ride. If you love great music, pick up a copy of American Ghost and see how a band can truly go out in style.