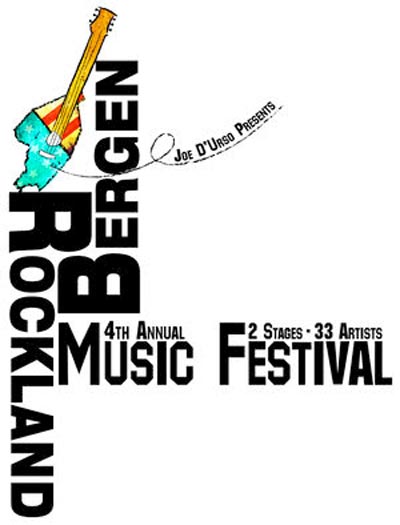 (TAPPAN, NY) -- On June 24 and 25, New Jersey/New York fixture Joe D'Urso will present the fourth annual Rockland-Bergen Music Festival on the borders of Rockland and Bergen counties in Tappan, New York. The festival, which has now become an anticipated event in area, will feature over 33 artists on two stages as well as 15 non-profit organizations to realize D'Urso's vision of a musical event that combines great music and important causes.

Early bird tickets are now on sale at the price of $45 or $51 for a two day pass. Visit www.rocklandmusicfestival.com for pricing and details. As in years past, anyone born in the calendar year of 1967 can enter the festival for FREE in celebration of their 50th birthday.

"As we enter our fourth year, fans can expect a lot of the same things that we have been doing the past few years. Festival fans have said that this is their favorite small music festival as it feels like a family BBQ with famous and talented people walking around and performing. I personally love that line as that is exactly what I was going for when I started 4 years ago. The RBMF is a true labor of love as I wanted to bring fantastic music to the border area of Rockland and Bergen counties as we have never had anything like this in our area. Now, we have had various Grammy winners and Rock and Roll Hall of Fame members. Not bad for a family BBQ!" said D'Urso about the fourth installment of this annual event.

Rockland-Bergen Music Festival's mission is to bring great music to the beautiful areas of Rockland and Bergen counties area while raising awareness and consciousness of many organizations that are doing great work in various fields of health and humanity and have them be discovered and supported by music fans.

"As we have had in the past, there will be 15 or so not for profit/501C3/charities on site each day from the local community and region. My goal is to have every person who attends to discover an organization and maybe get involved with those folks. Enriching lives along the way, both the festival go’er and the organization. It's not your normal 'festival fare' when walking around but it has been a wonderful 'adventure' and I have to thank my friend Joe Allen and Active International for helping me create "Active’s Circle of Hope" which donates funds to each organization on site.  The organizations also receive donations from folks at the festival, but more so, relationships start," said D'Urso about the charitable organizations on site.

Tailgating is not allowed in the German Masonic Park parking lots

Hours of Event: Parking lot opens at 9:30am

A limited amount of 10x10 tents allowed into the festival.

These tents would be set up on the "back third" section of the main field.

4th Floor across from Levity Live and 5 Wits

There are tables and chairs so you can sit, listen and be comfortable!

Charitable Organizations on site during the RBM Festival 2017:

Blankets and chairs are welcome; Hats, sunglasses and bandannas for shade; Personal identification & medical documentation, in case of emergency; Cash is good to bring. There is an ATM on site as well and the town of Tappan is close by; Rain gear, just in case; Clothing with a hood; Extra pair of shoes/sneakers; Sunscreen.

Please do NOT bring:

No Illegal Substances, No Pets (Service animals, trained to assist an individual with a disability, are allowed)