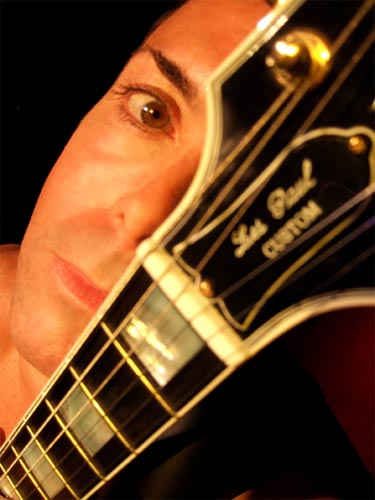 Richard Barone, former lead singer of the legendary band The Bongos, recently released his first book, FRONTMAN: Surviving the Rock Star Myth, a book based on his own experience and those of other rock and roll frontmen. His old band actually reunited at the Hoboken Fall Arts & Music Festival to help promote the release of Drums Along The Hudson - Special Edition finally released the way it was always intended to sound. While the band was back in Hoboken, the city took the chance to honor the band with a proclamation calling September 30th "Bongos Day" - a fitting tribute to the band which pretty much led to the creation of Maxwell's as an original music venue. In doing so, Richard Barone and his bandmates put Hoboken back on the forefront of New Jersey's musical map for the first time since maybe the days when a young Frank Sinatra still walked the streets.

Tell me about Frontman.
The original title of the book was How To Be Richard Barone and was to be like a how-to book. It was kind of funny and autobiographical. Although this book still has a lot of the same elements it focuses on the front man aspect of my life and how that defines me now as a producer. It's also not just about me but about all front men and front women of bands and the kinds of pressures that they are under.

Did you spend a lot of time checking out other frontmen throughout history?
Yeah, what happened was that I was having a conversation one night with my manager about front men. It wasn't something I was consciously aware of - that I was the front man of the band. Only in hindsight did I realize it and I would never have used that phrase when I was in The Bongos.

At some point in the writing I did a Google search for "frontman suicides" and that opened up a whole train of thought for me about the survival of the frontman character and what happens to so many of them. The book has references to front men who have not survived either by burning out or death or various fates that were terrible. Some of them even overcame those things. Someone like Brian Wilson of The Beach Boys who wasn't really the front man but was the spiritual front man and the creative front man of the group. He turned things around and survived but it was still quite a struggle for him. And there's people like Syd Barrett of Pink Floyd.

It was an interesting evening when that struck me - front man suicides and front man deaths. That's when the book became Surviving The Rock Star Myth. I started thinking about the myth of a rock star and what it meant to me even as a child; who that person has to be and what you have to live up to. And the hardest part is if you're a front man of a band. Then you are really responsible for the stardom of the whole band. You're the one that they look to for the focal point and if you fail they fail.

Can being a front man change a person?
Yes, it can. I think sometimes a front man may get into drugs or another outlet. It's usually a way to deal with being the frontman and dealing with the pressure. It's not always a headonistic kind of drive to be spaced out all of the time. In a way, it's just to get your mind off of the fact that you're responsible for a whole entourage and responsible for the success of the recordings that the label is putting millions and millions of dollars in to market. So, there's a lot of pressure on the front man. The other band members can take it easy. The bass player can kind of be out of it in a hedonistic way and just hang out. Ultimately, the front man has to be the one to bring home the bacon. That's the train of thought and that's what is on a front man's mind so much.

Is survival the best someone can do?
All I can say is that first you have to survive. This book tells the story of someone - me, in this case - who was on the verge of not surviving.
This book is about learning to collaborate with other people and not always putting yourself in the front man position. I think the people who have survived - and when I say survived I mean thrived - are those who diversified their work.

You can thrive but I think everyone has their own way of thriving. For me, it was producing other artists and collaborating.

Does the living on the edge go side by side with creativity and pressure?
I think so. I think one feeds the other. Things can be amazingly creative but they can also crash and burn.

Are there any plans for a possible movie based on the book?
Yes, there were talks even before I finished the book.

Did the release of Front Man: Surviving The Rock Star Myth have anything to do with The Bongos getting back together?
Actually the reason was really the restoration of Drums Along The Hudson which came out in July. It was a long process of reassembling the album because I wanted to do it from the original master tapes. We had to restore them meticulously because they had gotten damaged over time, but I knew it would sound the best if I could pull this album from the original tapes and it did. It sounds amazing!

Several years ago I had obtained the master tapes from England. It was made on a 1/4 tape and the damage occurred not on the tape itself, but the leader between the songs. So you have to carefully get it to be playable and the way to do it was to let it be in an oven over night. And you can only play it once or twice after that. We got it right though.

There was an article on the restoration of Drums Along The Hudson in EQ Magazine, which is a technical magazine for recording artists, producers and engineers.

The record sounds pumping and for the first time sounds the way it was intended to sound. We were never able to capture it on vinyl with the intensity that it was recorded. When we cut that album for vinyl, the drums on Drums Along The Hudson were so deep and fat that they had to reduce them to cut grooves that wouldn't skip. To do that they had to take a lot of the bass out of the record. But now we were able to put everything back in from the original tapes and it sounds just like the way it did in the studio in England when we recorded it.

What's the status on the record you've been working on with Tony Visconti?
I'm so excited about it! It's songs that have been collected over the last two years. We record whenever we each have the availability to go into the studio and record something new. We never write any songs before we meet. We just go in with the idea for a song and create it in the studio. This is my first recording done this way. Usually everything is written and demo-ed and scored before I go in the studio and then we recreate it there.

I had heard of other artists doing this and always loved the idea of going in and just creating from the situation that you're in that day. It's so spontaneous. Every song is done that way and I'm thrilled.

I've heard you're planning on releasing a couple of tracks as singles in the near future.
Yes, there are plans to release them on iTunes as an EP. I've always loved singles. When I was a kid playing records on the radio it was all about singles. And when we started The Bongos all we ever wanted to do was make singles. We loved them.

Keep an eye out for Barone's new releases on iTunes and pick up his book in stores everywhere as well as online stores like Amazon.com and BarnesandNoble.com.