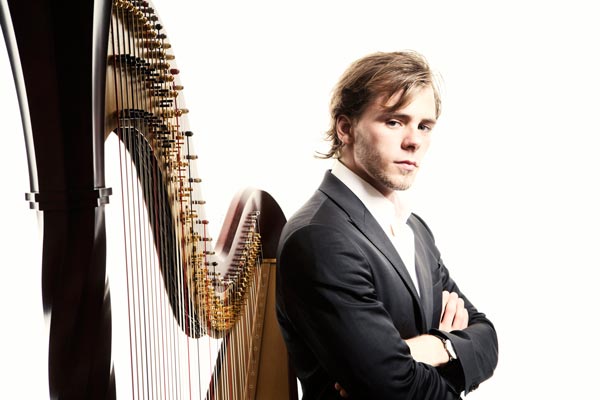 Respighi’s Ancient Airs and Dances harkens back to melodies and rhythms of baroque guitar and lute pieces, with expressive intimacy in the third suite created through the use of only string instruments. Puccini’s I Crisantemi references chrysanthemums, the traditional flower of mourning in Italy; the work was composed in a single night in response to the death of Puccini’s friend, Prince Amedeo, Duke of Aosta.

Harpist Alexander Boldachev gives virtuosic performances of Smetana’s The Moldau, arranged for harp by Hanuš Trneček, and Boldachev’s own arrangement of Piazzolla’s Libertango. Also on the program are his 2018 work Triomphe de la Musique, dedicated to Marc Chagall and based on his mural hanging at the Metropolitan Opera House in New York, and a new improvisational work inspired by Princeton University’s motto, Dei sub numine viget (Under God’s Power She Flourishes).

ALEXANDER BOLDACHEV has been breaking the mold of the 21st-century harpist with unprecedented virtuosity. He is the official artist for Salvi Harps, guest artist of Bolshoi Theater, and founder of the Harp Festival Zurich. Following his solo debut at age eight, Alexander began his international career as a soloist, chamber musician, and composer. He has brought the harp to new audiences throughout 35 countries and five continents. As an arranger, his extensive compositional activity concentrates on expanding the harp repertoire by means of transcriptions of major orchestral works, popular hits (by Queen, The Beatles, Nirvana, Adele), and excerpts of movie music (Star Wars, Pirates of the Caribbean, Spirited Away, and James Bond films). Alexander's unique compositions include programmatic works for harp and orchestra, theatrical works featuring harp, choir works, and film music collaborations. He has led masterclasses at The Juilliard School, Royal Academy of Music, Toronto Royal Conservatory, and other music schools around the world.

This concert is part of the PSO’s “Your Orchestra, Your Home” series. Access to the virtual concert is $15 per unique device access link and includes the ability to participate in a live chat while watching with an online community of music lovers. Following the broadcast at 4:00pm, viewers receive on-demand access to the concert for one week. To purchase, call 609-497-0020 or visit princetonsymphony.org.

The Princeton Symphony Orchestra (PSO) is a cultural centerpiece of the Princeton community and one of New Jersey’s finest music organizations, a position established through performances of beloved masterworks, innovative music by living composers, and an extensive network of educational programs offered to area students free of charge. Led by Edward T. Cone Music Director Rossen Milanov, the PSO presents orchestral, pops, and chamber music programs of the highest artistic quality, supported by lectures and related events that supplement the concert experience. Through PSO BRAVO!, the orchestra produces wide-reaching and impactful education programs in partnership with local schools and arts organizations that culminate in students attending a live orchestral performance.

The PSO receives considerable support from the Princeton community and the New Jersey State Council on the Arts, regularly garnering NJSCA’s highest honor. Recognition of engaging residencies and concerts has come from the National Endowment for the Arts, and the PSO’s commitment to new music has been acknowledged with an ASCAP Award for Adventurous Programming and a Copland Fund Award. The only independent, professional orchestra to make its home in Princeton, the PSO performs at historic Richardson Auditorium on the campus of Princeton University.