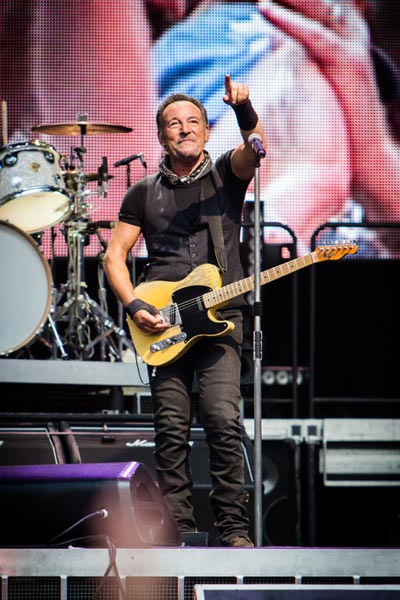 (FREEHOLD, NJ) — Fans of Bruce Springsteen from around the world are sending him a special birthday present this year — they’re following his lead and raising money for The Foodbank of Monmouth and Ocean Counties.  The fundraiser runs from Springsteen’s birthday on Friday, September 23 until Monday afternoon.

The idea comes from BRUCEBOOK a group on Facebook that has nearly 7,000 fans.  Their goal is to raise $6,700 in honor of Springsteen’s 67th birthday.  As of 8:00pm on Friday, they had raised over $3,000.  Since Springsteen has been a long-time supporter of community food banks (and has performed benefits for the Monmouth and Ocean Food Bank itself) this was the perfect cause.

Donating online or via phone is easy, but the group asks you to add a dedication to let the organization know this is part of the BRUCEBOOK fundraiser.

To donate, just go to foodbankmoc.org

you can donate by credit card, debit card, or paypal.

Make sure that in the box below 'I want my donation to be dedicated’  that you include your name, BRUCEBOOK, and Happy Birthday Bruce Springsteen.

Donations may also be done by phone by calling 732-918-2600, Extension 5856.  Once again, Please tell the operator your name, BRUCEBOOK, and Happy Birthday Bruce Springsteen.

BRUCEBOOK is a closed group, but fans of Bruce Springsteen can request to join.  The group is always pleased to welcome new members and see its community grow.

About the Foodbank of Monmouth and Ocean County

The FoodBank began in 1984 when a small group of people saw hunger at the Jersey Shore and decided to make a difference. They purchased a dilapidated warehouse in Spring Lake. Carpenters, masons and other members of the community donated work, office furniture and supplies. Food streamed in from hundreds of donors. After one year, the FoodBank was serving 25 charities with 100,000 pounds of food.

Ten years later, nearly two million pounds of food was being distributed annually from the same small warehouse. Bursting at the seams, the FoodBank undertook a capital campaign in 1998 to construct a new facility in Neptune. Three years later, the current 40,000 sq. ft facility became a reality.