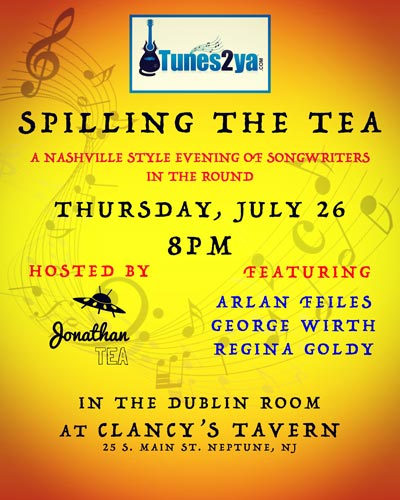 (NEPTUNE, NJ) -- Tunes2ya presents "Spilling The Tea" -- Nashville Styled evenings In The Round with four singer-songwriters from the local and regional area inside the Dublin Room at Clancy's Tavern in Neptune.  The series debut takes place on Thursday, July 26 at 8:00pm with a lineup that includes Arlan Feiles, George Wirth, Regina Goldy, and Jonathan Tea (also the host of the series). In addition, Genevieve will perform from 5:00pm-8:00pm at the bar with Jim Popik.

Nashville grew from a foundation built on music.  In an intimate setting, where you can experience the unique, "In The Round", format created at the Bluebird Cafe where three or four song-writers sit in a circle, performing their songs and talking about the inspirations behind their music and each song. The audience is given a unique opportunity to hear original material from different points of view in a casual, comfortable environment. As a listening room, silence is requested at all times during a performance.

Jonathan Tea, a California- born, Texas raised, and now NYC/NJ shore-based artist. Jonathan's sound blends strong, earthy vocals with well crafted songs to create a sound that is familiar by inviting the crowd into his story and rewarding careful listeners with smart lyrics and mature sense of phrasing and groove.

Arlan Feiles is an award winning singer-songwriter,multi-instrumentalist, and music producer. Discovered by the late great Rock and Roll Hall of Fame Record Producer Tom Dowd. Arlan has had his music in many TV programs and movies, including the Academy award winning film the Dallas Buyers Club.

George Wirth is a singer-songwriter who lives in Brick, NJ. Wirth has been called one of New Jerseys finest singer-songwriters. He was the recipient of the 2011 Jersey Acoustic Music Award for album of the year for The Last Good Kiss. George has been a resident of the New Jersey Shore since his early teens and is an active member of the Asbury Park music community.

Regina Goldy is a New Jersey native who will sing you a song in her unique blend of folk, blues and coffeehouse style music. Regina grew up singing in local churches and festivals however it is only in the last few years she has been sharing her own songs on stage. Recently been seen with singer-songwriter Tim Coyle, they call themselves Between Hope and The Highway. Finally finding her life's purpose and feeling brave enough to share her musical journey.

Upcoming Shows in the series include:

Thursday, August 30
with Williamsboy at the bar from 5:00pm to 8:00pm and "In The Round" at 8:00pm in the Dublin Room with Genevieve, Dave Vargo, and Kim Boyko.

Thursday September 20 "In The Round" at 8:00pm in the Dublin Room with Jonathan Tea, Williamsboy, Renee Maskin, Jamie Coppa

Thursday October 25 with James Popik from 5:00pm-8:00pm at the bar and "In The Round" at 8:00pm in the Dublin Room with Jonathan Tea, James Popik, Mike Montrey, Pamela Flores

Thursday November 29 "In The Round" at 8:00pm in the Dublin Room with Jonathan Tea, Michael Patrick, Keith Monacchio and Kate Mills

Thursday December 13 "In The Round" at 8:00pm in the Dublin Room with Jonathan Tea, Chris Brown, Michael Askin, TBA