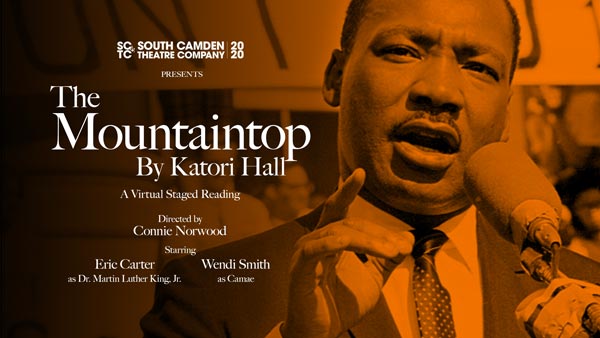 (CAMDEN, NJ) -- The South Camden Theatre Company presents a streaming video production of the staged-reading of Katori Hall's The Mountaintop. The play is a gripping reimagination of events the night before the assassination of the civil rights leader Dr. Martin Luther King, Jr. in 1968. The production stars Eric Carter and Wendi Smith.  Ms. Connie Norwood directs. It will be available for two weekends (December 4-6 or December 11-13).  Viewers purchase streaming rights for a 48-hour viewing timeframe.

When you make a household viewing donation of $15.00 plus a $2.50 handling fee, you will have 48 hours to watch the show. If you live in a Camden zip code you will be able to purchase a viewing for $5.00 plus a $2.50 handling fee. You will also have 48 hours to stream the video. Click here to purchase the stream. USE CODE SCTCTOP TO UNLOCK TICKETING!

As actor Eric Carter, playing Marting Luther King, Jr. makes his way onto the stage,  you'll be transported to that night. You'll hear Dr. King playing with different words and phrases in preparation for a speech. Such phrases as, "Why America is going to hell" is one that you'll hear.

The play comes across as a source of comfort for many Americans who to this day just can't seem to make sense of the tragedy that occurred. Here Dr. King is retreating to the comfort of his hotel room after delivering the mountainous speech "I've Been to the Mountaintop". Not feeling all that great and wore out, he's been let down by the turnout for his speech and appearance... he apparently was expecting much more. He's somewhat paranoid as he checks around the room for listening devices.

We are soon introduced to another character: Camae, a motel maid, played by Wendi Smith. She enters the show bringing Dr. King some coffee and is clearly a spirited personality.

It doesn't take long before you can see there's a certain chemistry between Camae and Dr. King. Some could speculate that this is common with Dr. King and his reputation for being somewhat of a womanizer. Her flirtatious spirit brings a sharp edge to her personality.

A young beautiful woman, Camae is far from the innocent one she initially appears to be. Her candor seems to make it easy for Dr. King to relax and it doesn't take long at all before he begins putting some of his smooth moves on her. She handles it perfectly without missing a beat and even seems to leave his flirtations somewhat open to being successful.

South Camden Theatre Company was incorporated on October 6, 2005. They are a professional theatre company that works hard to produce  shows with paid actors, directors and designers. They are lead by a non-profit theatre board. The individuals who work on the board of directors are all volunteers. They do what they do out of love for theatre and for the community. Together, They produce some of the best theatre productions in the area. The theatre company is located at 400 Jasper Street in Camden, New Jersey.