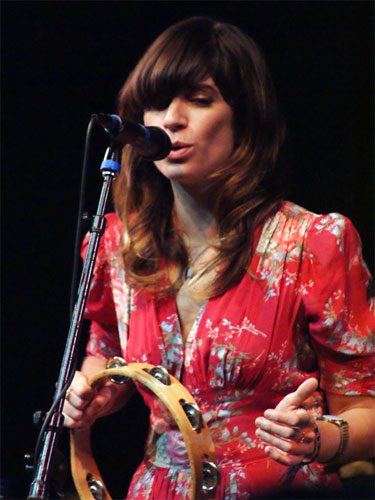 "We were going to play a lot longer tonight, but Jesse's got great stories," joked Joe Rapolla, who along with Joe D'Urso hosted another brilliant "Songwriters at the Sea" show October 30 at the Strand Theater in Lakewood, NJ.

The stories told by Jesse Malin were quite amazing to say the least. In fact, all of the artists had incredible stories tonight. The lineup, which was probably one of the strongest in the series' history, also included Nicole Atkins and Joe Grushecky. The opening lineup of local artists was just as impressive featuring Keith Monacchio, Arlan Feiles, Rob Dye, and Casey Schuber. Once again, the show was conducted entirely on the stage of the Strand. Roughly 150 chairs surrounded the artists and made the setting seem less of a concert and more of an informal jam session held at someone's house.

The artists took turns telling a story and providing a little insights into their music before performing songs. Some of my favorite stories were:

* Nicole Atkins telling us how Halloween was the biggest day of the year for her family. Growing up, she said she lived in what was known as the "Hot Dog House" because they handed out hot dogs instead of candy. She later spoke of how a visit to the house where the author Stephen Crane used to live in Asbury Park inspired her song "They Call Me The Witch." She was also inspired once to finish a song she had in her head for years while watching "Judge Judy" on the treadmill at the Bradley Beach gym.
And we learned that she cannot stand being called "sensual"...

Jesse Malin recalled how an album of cover songs he released a few years ago brought upon his first true successes on commercial radio. Friends would call him from across the country to tell him they heard his cover of Jim Croce playing at the supermarket. They would congratulate him and assume he was getting rich from royalty checks, but, as Jesse pointed out, those checks were going to the artist that originally wrote the song - not him. Broke and looking for a break, he got a call from his agent about opening a tour for Gogol Bordello. The first show took place in Moscow, a point that would ironically lead to fellow stories by Nicole Atkins and Joe Grushecky.

Jesse Malin also had a great story about Hollywood. His band was opening for Blues Traveler just outside Hollywood when a writer approached him after the show, handed him a card, and said he wanted Jesse to write some songs for a movie of his. Not knowing who the guy was Jesse took his card and expected the worst, but after a quick search online at IMDB he realized the writer was actually pretty big in the industry. He eventually got involved with a film about the life of J.D. Sallinger. He was given all of Sallinger's books and biographies on the man. Jesse laughed as he recalled how he began re-reading "Catcher In The Rye" and loved it because he wasn't 16 trying to pass a test - he could just enjoy the book. "It's punk rock!" he said. Meanwhile, friends of Jesse's convinced him to try and visit Sallinger in person which turned out to be a pretty bad idea. He got arrested in New Hampshire because you're really not supposed to try and meet someone like Sallinger... Thankfully, the police looked him up on the Internet and released him after seeing a video of him with Bruce Springsteen.

It was that kind of night.

One of the reasons the "Songwriters By The Sea" series is so successful is that artists just seem to feel incredibly comfortable with Rapolla and D'Urso. There isn't any uptight or weirdness; people are casual from the get-go. Another reason is the sound. While it's not a true listening room, the sound is spectacular. The series is meant to highlight songwriters - and it does - but it also provides a wonderful opportunity for the performer's voice to shine. Far too often, these performers cannot play songs like they played tonight because the songs are too quiet and they would lose the fight against the noise of the crowd or the sounds of the bar. This series allows the artists the chance to play whatever they want to play and not worry whether they song calls for them to whisper or to scream. Even more importantly, the series attracts music fans who will listen intently for every note and pay attention to every lyric.

Music wise, the night was an unparalleled success. Every performer did a superb job. There may have been a couple stumbles along the way, but that's what happens in an informal setting. If anything, those rare moments add to the personal nature of the series.

The final round of the night is always the "cover round". I've got to admit, I absolutely love seeing the artists do covers. I know it's technically a songwriter night meant to highlight their own work, but it's fascinating to see which artists may be inspirations that we don't know about. It's also fun to see what kind of twists and turns they may add to the songs.

Joe D'Urso started off the cover round lamenting that he didn't know how to play "Monster Mash" and then gave us a beautiful version of "All I Needed Was You" by Steven Van Zandt. Nicole Atkins followed with a breathtaking take on Roy Orbison's classic, "Crying". Joe Grushecky played tribute to a Doc Pomus, a legendary artist from Pittsburgh who wrote "Save The Last Dance For Me", which wound up as a huge hit for Ben E. King and the Drifters. Jesse Malin followed with his tremendous cover of "Bastards of Young" by The Replacements that appeared on his last record. And Joe Rapolla closed the round out with a fun take on Tom Petty's "Last Dance With Mary Jane". The entire group got together for their final number - "Werewolves of London" by Warren Zevon. Some of the lyrics were from the song and others were improved as each artist took turns taking lead vocal.

After the show, I was reminiscing with photographer John Cavanaugh about the old "Writers In The Raw" shows. This series is very much in the same vein as that show was. WITR seemed to have a period in time that it owned. For me, it was when the show first started out at Harry's Roadhouse. "Songwriters By The Sea" has found its home at the Strand and it owns this period of time. Rapolla and D'Urso always line up some of the best artists in the area to go along with incredible national acts. With the brilliant sound and wonderful stories, it's a combination that makes for a magical night. It's the best series of its kind right now...