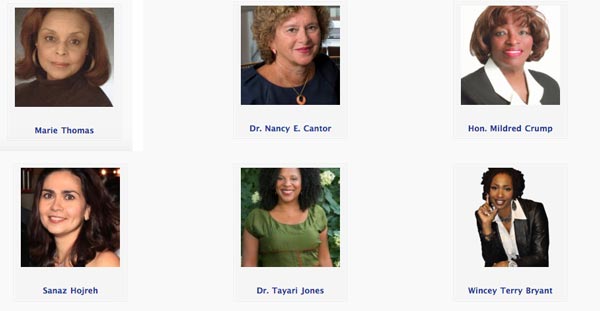 On March 28th, the Honorable Mildred Crump, long-time Newark City Council member, and current City Council chair, will be recognized for her decades of public service.  During her tenure on the council the City of Newark has witnessed unprecedented levels of cultural and economic growth.

On March 29th, Chancellor Nancy Cantor will be honored for her visionary leadership of Rutgers University—Newark (RU-N).  Cantor has long been recognized as a distinguished higher education leader who is helping to forge a new understanding of the role of universities in society.

Also being recognized for their contributions to society are actress and arts educator Marie Thomas who, in addition to having extensive acting credits in theatre and television,  is the founder and artistic director of Children’s Theater Workshop/The Peppermint Players; cultural activist Celeste Bateman, who is a New Jersey-based licensed booking agent representing myriad local and international talent and institutions in the arts; Sanaz Hojreh, who has been described as a “fearless advocate for arts education…”; and author & RU-N Professor Tayari Jones, whose critically acclaimed novel Silver Sparrow is the focus of the Women In the World Symposium being held March 31-April 1, 2017 at Rutgers University- Newark as part of the Women’s History Month Film Festival.

Honoree Celeste Bateman described the Women’s History Month Film Festival saying, “The response to our festival over the years has been tremendous. People of all genders, ethnic and cultural backgrounds want to hear good stories by and about women. This is the mission of this organization, to tell those stories – some inspiring, some heartwarming, some heartbreaking and some empowering – and to support the works of these extraordinary storytellers, women filmmakers from around the world.”

Co-sponsors of the Women In Media-Newark film series include the Rutgers University—Newark Office of University-Community Partnerships/Office of the Chancellor, the John Cotton Dana Library, Rutgers Institute of Jazz Studies, the City of Newark, the East Orange Public Library, the First Unitarian Society of Plainfield, Monmouth University, New Jersey Performing Arts Center, Newark School of the Arts, and WBGO-Newark Public Radio.

The film festival is free and open to the public, although donations are welcome. More information can be found by visiting www.WIM-N.com.

Women In Media – Newark is an organization that advocates for and educates the public about issues affecting the lives of women using film, video and new media as our platform. Merging culture and academia, we rally behind our sisters who courageously struggle to assume leadership roles in the film industry with their conscious effort to present a balanced image of women, dispelling the stereotypes and changing public perception of their sisters worldwide.